A graphene-enhanced jacket for sailing. Why are Captchas getting harder? A bakery creates essentially a cookie-based wanted poster. AI writes bleak and depressing stories. AI paints “self” portraits, raising all sorts of existential questions. A cicada cookbook, for some reason. LED lightbulbs attract fewer insects than incandescents. Perfect for BBQ season: a levitating hot dog roaster. Learning to ride a penny farthing bicycle. All that and more in WhatTheyThink’s weekly miscellany.

Minneapolis-based Hennepin Healthcare’s fact sheet states that Covid-19 vaccines do not contain the ‘Mark of the Beast’.

OK, good, that answers one question we’ve had: says Vox: “It’s not you — captchas really are getting harder.” Whew, that’s a relief. Wait, what: “The worst thing is that you’re partly to blame.” Huh?

A captcha is a simple test that intends to distinguish between humans and computers. While the test itself is simple, there’s a lot happening behind the scenes. The answers we give captchas end up being used to make AI smarter, thus ratcheting up the difficulty of future captcha tests.

But captchas can be broken by hackers. The tests we’re most familiar with have already been broken. Captcha makers try to stay ahead of the curve but have to balance increasing the difficulty of the test with making sure any person — regardless of age, education, language, etc. — can still pass it. And eventually, they might have to phase out the test almost entirely.

Oh, that would be a shame.

A would-be burglar picked the wrong place to allegedly burgle. From Fox 13 News: A bakery in Milwaukee was robbed, surveillance video caught perpetrator, and the and the police circulated a photo of the suspect. The owner of the bakery then took the photo and digitally printed it on a batch of cookies using edible dye. 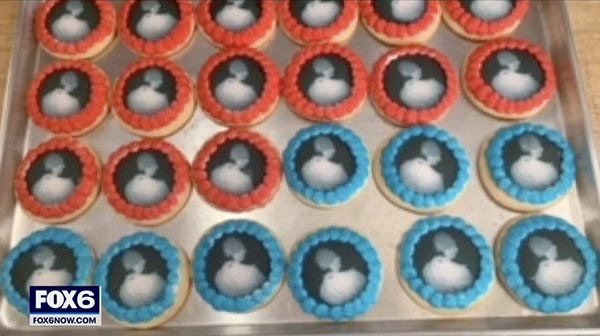 Here’s the icing on the cake cookies: The cookies were widely reported, an officer saw the report, recognized the suspect, and nabbed him.

For more serious felonies, perps get their mugs on an entire sheet cake.

GPT-2 is neural network software that completes the beginning of a story you tell it. GPT-2's database contains the text of millions of web pages, which it uses to produce the stories, one word at a time, in the same way smart phones use autocomplete to help people write text messages. The stories it generates contain the interests and cultural biases of the internet-using population.

Sounds horrifying. And it turns out it is! Someone used the GPT-2 neural network to generate 100 answers to the prompt “What will Happen to Me?” and compiled their favorites into a zine, albeit a dark one.

What I noticed immediately was the dark, morbid nature of many of the AI generated responses. If the entire internet was a single brain, it would be a very tormented one.  Although some of the responses don't make complete sense or flow the way that a normal sentence would, I think this adds to the eeriness of the zine. 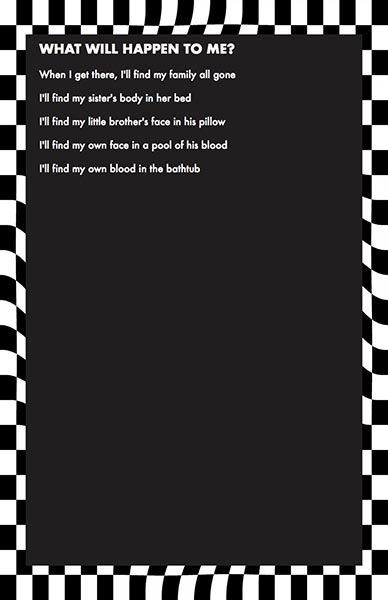 Yeesh. And that’s not the creepiest either.

OK, so AI writers make Sylvia Plath sound upbeat and cheery, but what about AI painters? Does their work make you want to kill yourself? Well, meet Ai-Da, the robot artist. Via The Guardian: 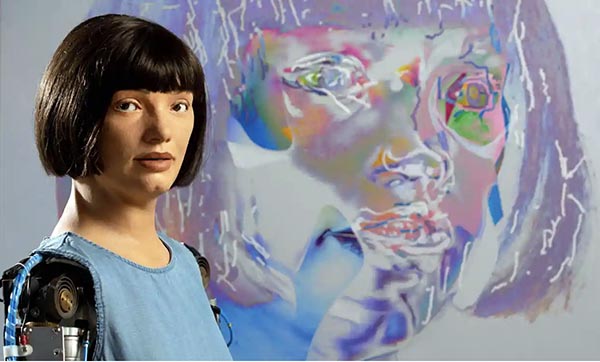 Named after the computing pioneer Ada Lovelace, Ai-Da took a team of programmers, roboticists, art experts and psychologists two years to build. She was completed in 2019 and is updated as AI technology improves.

Here’s something that will blow your mind:

Ai-Da’s move into self-portraiture will be seen for the first time at the museum, with three large-scale works going on display. They raise interesting questions about identity and creativity. “It is literally the world’s first self-portrait with no self,” said Meller. “She has no consciousness, she is a machine.”

…In an unnerving conversation with the Guardian, Ai-Da said she was working on a new self-portrait. “I’ve always been fascinated with self-portraits to self-question what exactly you’re looking at,” she said, blinking.

Does she enjoy it? “I do not have feelings like humans do however I’m happy when people look at my work and they say what is this? I enjoy being a person who makes people think.”

Then again, we’ve read some Dylan interviews that were more unnerving. At any rate, Ai-Da is getting its own display at the Design Museum in London, which we’re sure living artists don’t resent at all.

The cicadas have started to emerge and perhaps the first question one asks about them is not, “Do you know any good cicada recipes?” But if that is your first question, well, good news! Via The Washingtonian, author Jenna Jadin has you covered. The last time—17 years ago—the cicadas emerged in the Washington, DC, area, she wrote Cicada-Licious: Cooking and Enjoying Periodical Cicadas. Supposedly they taste like chicken shrimp.

As Jadin was researching and writing the book in 2004, she discovered the best ways to find and prepare the cicadas—and shared her do’s and don’ts with us. For starters, young grubs are the best to eat since they haven’t developed a hard exterior yet. However, grubs can only be found when they’re coming out of the ground in the evening, so it’s necessary to be vigilant and check a yard or wooded area almost every evening after 9 or 10 PM.

You can’t get them via Instacart? Dang. OK, now things are getting gross:

Jadin says the best way to both kill and store cicadas is to freeze them (if you’re brave, pluck the legs and wings off first). If you’re really into foraging for nutrition, she says nutrient-rich adult females are your target. Males, which don’t carry eggs, are of less value. To distinguish between the two, Jadin describes how adult female cicadas have an ovipositor, which is a thin tube folded up around their bodies that’s full of eggs. Adult males are hollow in their abdomen and have tymbals (thin membranes) on their sides that produce sound.

Why that should sound grosser than “peel and devein shrimp” or anything we do to a lobster or crab—which many of us happily do—is a mystery, but there it is.

If this sounds appealing, click through for her Old Bay spiced cicada recipe. (Four pounds of cicadas?! Yikes.)

None of Your Poultry Excuses

We have reached some kind of event horizon of management blaming labor. https://t.co/bVjrPdlpGS

Some of us live in a part of the country non-native to cicadas, but we still have our usual entomological issues: lightbulbs attracting insects. However, says Prevention magazine via Core 77, one way to reduce phototropic bugs is to install LED bulbs.

Bugs are most drawn to the blue end of the color spectrum and ultraviolet light in particular. "Incandescent lights have a much broader spectrum of colors that are generated along with much more heat generated, both of which are attractive to many insects," [entomologist Doug] Webb explains.

Enter: LEDs, which "do not output much UV light," [entomologist Emory] Matts says, so it's possible that switching your bulbs may make a difference. The wavelengths in typical LED household lights "are simply not the wavelengths that are most attractive to insects," Webb adds.

It’s grilling season, at least in a lot of places, so Gizmodo asks: “Looking for a more hygienic way to roast a hot dog that doesn’t involve it rolling around on a rarely cleaned grill?” Not really, no. But if that does bother you, why not try a levitating hot dog roaster. Say what? “Taking advantage of the Coand? effect, YouTube’s NightHawkInLight has created a bizarre BBQ alternative that instead levitates a wiener inside a red hot coil.”

Even if you’re not familiar with the Coand? effect, you’ve probably seen a video or two online of it in action, and have definitely experienced it in real life. Named after Romanian inventor Henri Coand?, it describes an effect where a fluid jet—either a liquid or gas—has the tendency to cling to the contours or a convex surface. If you’ve ever tried to empty a mug into a sink and had the coffee run down the side and drip off the bottom of the mug, that’s the Coand? effect at work. But it can also be used to make objects with curved surfaces float using an air gun by generating lift that counteracts the effects of gravity, like ping pong balls, oranges, screwdrivers, and now grilling season staples.

Who’s grilling staples? Don’t they fall through the grate?

Anyway, check it out:

Make of that what you will.

Word to the Wide: Don’t Take Selfies while Bicycling

Finally this week, via Laughing Squid, we end with Mike Boyd teaching himself how to ride a penny farthing bicycle. At least he was smart enough not to take a selfie.

1912: The first Indian film, Shree Pundalik by Dadasaheb Torne, is released in Mumbai.

1806: English economist, civil servant, and philosopher John Stuart Mill, of his own free will, born.

1983: First publications of the discovery of the HIV virus that causes AIDS in the journal Science by Luc Montagnier.

1985: Radio Martí, part of the Voice of America service, begins broadcasting to Cuba.

2019: The International System of Units (SI): The base units are redefined, making the international prototype of the kilogram obsolete.

1703: Daniel Defoe is imprisoned on charges of seditious libel.

1932: Bad weather forces Amelia Earhart to land in a pasture in Derry, Northern Ireland, and she thereby becomes the first woman to fly solo across the Atlantic Ocean.

1981: Transamerica Corporation agrees to sell United Artists to Metro-Goldwyn-Mayer for $380 million after the box office failure of the 1980 film Heaven's Gate.

1804: The Lewis and Clark Expedition officially begins as the Corps of Discovery departs from St. Charles, Mo.

1900: The Associated Press is formed in New York City as a non-profit news cooperative.

1995: The first version of the Java programming language is released.