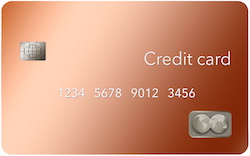 A prospective client seeking to sell their company recently asked me if the recent craze involving the use of SPACs to buy private companies might be applicable to their firm. I answered unequivocally that SPACs were suited to much bigger companies as well as industries with more future growth and appeal than exhibited by the mature printing and packaging industry. I was wrong. In the case of one industrial printing company, a merger into a SPAC is the pathway to value and liquidity for the owners.

SPAC is the acronym for a Special Purpose Acquisition Company. In simple terms, a SPAC is essentially a shell company that raises money in the public markets via a stock listing. Since there is no actual business at its formation, the investors in a SPAC are trusting that the sponsors will find a real business worth teaming up with. Once a target company is identified, the SPAC and the target company merge, and voilà, the private company has become a public company without all the fuss of convincing investors in the value and business model of the acquired company. SPACs have been around for a long time, but of late there has been tremendous growth in the use of SPACs; according to one source, the total value of SPACs jumped 400% from 2019 to 2020 and the number of deals to date in 2021 is easily on pace to exceed last year.

Which brings us to CompoSecure, a New Jersey-based industrial printing company that prints and manufactures credit cards. However, these are not your run-of-the-mill plastic credit cards. CompoSecure specializes in credit cards made from metal and metal laminates. According to the company’s website, metal credit cards are “products that excite and impress customers” and “elevate the cardholder’s experience at the point of sale.” Aimed at high-net-worth individuals and big spenders, bespoke credit cards are beautifully produced with brand names such as Primo, Alpha, Platinum, Venture, Carta Black, Real Gold, Infinite Privilege, Elite, and other names suggestive of a level of personal financial success that warrants carrying something other than a plain old plastic card.

The predecessor company to CompoSecure was founded in 1910 as a manufacturer of celluloid shirt collars, but quickly migrated to specialty industrial printed products such as radio dials that required an expertise in printing on plastics. Other products followed, such as slide rules and printed advertising specialties which eventually led to the production of printed cards for direct mail promotions. When the credit card industry boom hit, the company was perfectly positioned and became the second manufacturer in the world for MasterCard. The company added RFID products and contact chips to its offerings, leading to the formation of CompoSecure in 2000. The company produced its first metal card in 2003; the die was cast, and metal cards became the foundation for the company’s future and impressive growth trajectory.

The company’s advanced industrial printing and manufacturing capabilities have enabled it to branch out into other forms of high-end identification cards. These include membership and gift cards for upscale brands, exclusive lounge keys, as well as custom cards for guests at luxury resorts and casinos. In addition to these high-end cards, the company uses its secure production facilities and technical expertise to produce government-issued identification cards and other high security documents.

CompoSecure just announced that the company will be merging with Roman DBDR Tech Acquisition Corp., a SPAC with $236 million in cash sitting in trust ready to go. Based on the current market price of the SPAC shares, the implied proforma enterprise value of the company will be $1.2 billion upon completion of the merger. The company reported revenues of $261 million in 2020 with an adjusted EBITDA of $116 million (44.4%). The total proforma enterprise value equals 10.3 times adjusted EBITDA, 4.6 times trailing revenues. Philadelphia-based private equity fund LLR Partners, which invested $154 million in the company in 2015, will retain its position as CompoSecure’s largest shareholder.

A question remains for this industrial printer turned purveyor of credit eminence. Does a metal card still convey prestige when only the owner feels the heft of the laser engraved metal plate? Like many other aspects of our lives impacted over the past year by the COVID-19 pandemic, we almost never hand our credit card to anyone anymore, rather we insert the card ourselves into the chip reader or simply waive the card over the reader, or do without the card completely and pay using Venmo or other phone-based financial app. CompoSecure is not sitting around waiting to be obsoleted out of existence; up next: high-end luxury branded NFC-enabled metal cards to store or receive your cryptocurrency in an attractive “cold storage” device. And, for those at the top of the economic ladder, those crypto wallets will be metal and, of course, printed with status-conferring graphics.

The M&A activity in the packaging segments continues at a steady pace, with private equity 0providing the fuel for what can only be described as a hot market. Brook & Whittle, headquartered in Connecticut and backed by PE firm Snow Phipps Group, announced the purchase of Digital Label Solutions in Yorba Linda, Calif. Brook & Whittle has been on an acquisition tear, ripping through six acquisitions since the breakout of the virus last year. This latest deal is its third on the west coast. The acquired company is a trade-only printer and breaks the Brook & Whittle mold of rolling up direct-to-customer companies, crossing into the territory of label printers that serve distributors and brokers.

Fortis Solutions Group, with backing from Main Post Partners, announced the acquisition of Total Label, with production facilities in Montana and Tennessee. The company produces complex pressure sensitive, extended content, and booklet labels, using flexo, letterpress, and digital technologies. Fortis has built out a national production platform from its headquarters in Virginia Beach, Va., with 14 facilities ranging from California to Texas to Connecticut, and now way up north in Whitefish, Mont., 60 miles from the Canadian border.

The folding carton segment has not seen M&A activity and enterprise valuations anywhere near what has been occurring in the label segment. That may be about to change. Radial Equity Partners, based in New York City, established a new platform in folding cartons with the acquisition of Lewisburg Printing Company, in Lewisburg, Tenn. The acquired company operates very large format offset presses, as well as flexo and digital presses. In addition to packaging, the company produces retail displays. Radial Equity Partners is itself a new investment vehicle, formed by several partners from Irving Place Capital who bring extensive experience in packaging to their new private equity venture. We expect more deals to follow.

Oliver, a folding carton roll-up, purchased Boutwell, Owens & Co., located in Fitchburg, Mass. When Oliver was itself acquired by Chicago PE firm Pfingsten Partners in 2016, the company was already well on its way in its self-directed strategic transition from a commercial printing company to a folding carton manufacturer. Since then, Pfingsten has provided the strategic focus and gas in the tank to accelerate the transformation of Oliver. The Boutwell acquisition follows previous additions to the Oliver family: DISC Graphics on Long Island in New York, and Pohlig Packaging in Richmond, Va. Boutwell brings blister card expertise, as well as more folding cartons, to the Oliver platform.

Graphic Packaging, the publicly traded behemoth of the folding carton segment, acquired Americraft Carton. As befits a transaction by a larger buyer, the acquired company has seven manufacturing facilities, and is expected to bring in revenues of $200 million. With an adjusted EBITDA of $30 million (15%), the $280 million purchase price is 9.3 times adjusted EBITDA, 1.4 times revenue. Graphic Packaging expects consolidation savings to generate an additional $10 million of EBITDA within two years of closing, implying a going-forward purchase price multiple of 7.0 times the eventual adjusted EBITDA. 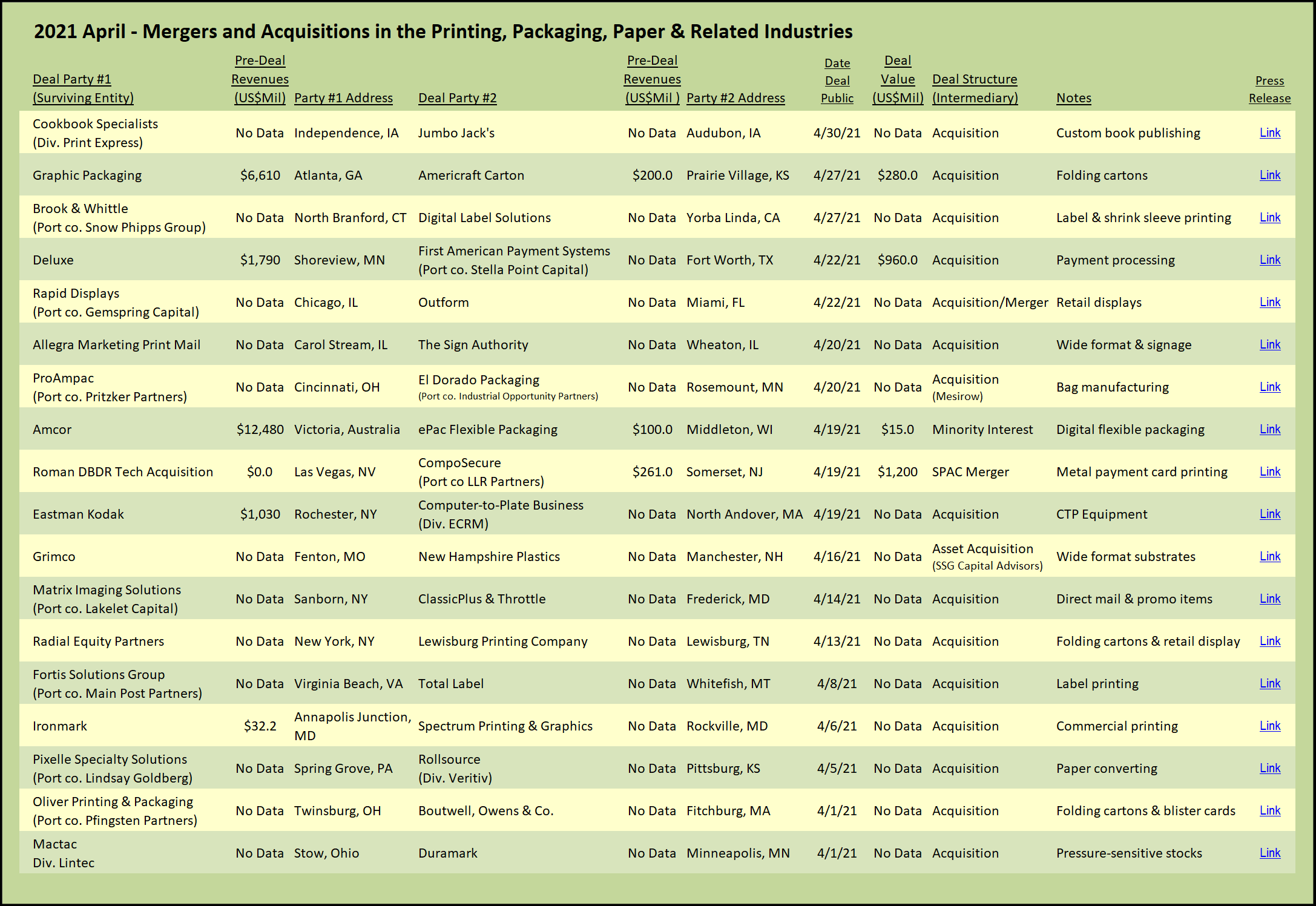