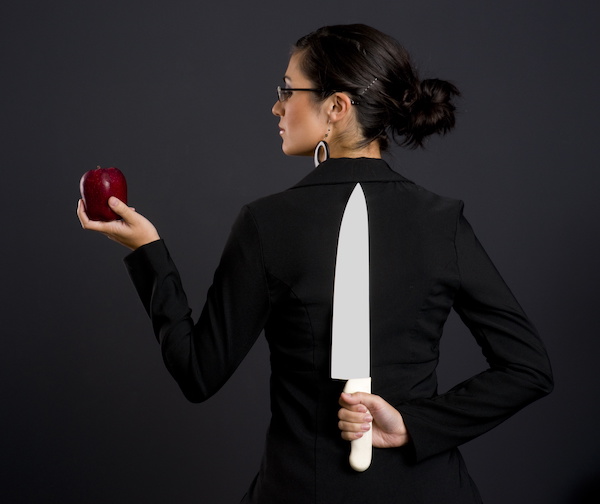 Who knew? A quiet movement has been afoot in the resurgence of artisanal letterpress printing. Mixing politics, feminism, and current events with creative, upbeat, and often downright edgy greeting card messages, a network of women-owned businesses has emerged as the voice of the small-shop letterpress trade.

When Paper Source, a national chain of stationery stores, filed for Chapter 11 bankruptcy, the network swung into action, a virtual social media David slinging shots at the corporate Goliath that had just informed approximately 250 cardmakers that they might not be paid in full for their recent shipments of finished goods. Adding insult to injury is the perception among the network that Paper Source had placed unusually large orders from these small independent print shops well in advance of the Spring holidays. They believe that Paper Source management would have, or least should have, known that all payments on those orders would be placed in suspension while the bankruptcy process plays out. Even more irksome, according to some of the cardmakers, Paper Source aggressively pushed for expedited deliveries, apparently to avoid the priority granted in bankruptcy to vendor payments due for products delivered within the 20-day period immediately prior to the bankruptcy filing.

The first shot was slung at Paper Source by the owner of Sapling Press, a letterpress printing shop in Pittsburgh, when she posted “Hell hath no fury like a stationer scorned” on Instagram. This set off a flurry of equally angry responses and supportive posts from the network, including the owners of Chez Gagné, The Card Bureau, Steel Petal Press, Power & Light Press, and Chateau Blanche Design, among others. The network’s vitriol is directed at the CEO of Paper Source, an accomplished woman with ivy league credentials and board level corporate experience in high fashion and retailing. The CEO now squares off against an angry group of entrepreneurial women, owners of micro businesses, who feel betrayed and taken advantage of by the large corporate entity that is, in better times, a significant distribution channel for their printed wares.

The large orders, some of which came after months of inactivity, were cheerfully greeted as a sign of hope, a return to normalcy after an especially difficult year. Several cardmakers received their very first offer from Paper Source during this time, a certain signal that the future was brighter. Their hopes were dashed as the payments of receivables, significant amounts for these small shops, were placed in doubt when Paper Source filed bankruptcy.

Adding insult to injury, Paper Source offered to designate some suppliers in the network with critical vendor status, which would allow immediate payment to the chosen cardmakers for the products that were delivered before the bankruptcy filing date. The alternative is for the cardmakers to wait until the process plays out and receive payments, possibly cents on the dollar, on an equal basis with all unsecured creditors. The rub with the offer to be deemed a critical vendor was that the payment would be between 10% and 30% of the amount owed, accompanied by a promise from the cardmaker that they would continue providing product to the stores for which they would receive 100% payment, consistent with bankruptcy rules.

Paper Source’s chapter 11 filing was preceded by the bankruptcy of Schurman Fine Papers in January 2020, which resulted in the closure of Schurman’s 254 stores, which included the Papyrus, American Greetings, and Carlton Card retail store chains. Paper Source picked up 30 of the closed Papyrus stores, announced on March 2, 2020, exactly one year to the day before its own bankruptcy, just in time for retail stores that sell cards, gifts and other discretionary items to get whacked by the outbreak of COVID-19. In defensive statements to the network of woman-owned cardmakers, the CEO of Paper Source pointed to the need to replenish inventories which had been depleted during the early stages of the pandemic, including the need to restock the acquired Papyrus stores.

Regardless of how the Paper Source bankruptcy plays out, we suspect that credit policies are being updated at many of the micro-businesses that supply the boutique greeting card industry. Extra care and thought will be employed when a large and unexpected gift-horse in the form of an inordinately large order comes in over the transom. As for Paper Source, once again a large corporate entity is taken to task by its constituents using the power of social media, this time by a network of small women-owned printing shops dedicated to keeping alive the tradition of fine letterpress printing.

It would be an understatement to say that packaging deals are dominating the M&A market in the printing and related industries. Shoreview Industries exited its investment in Rohrer Corporation after a hold period of 11 years, with Wellspring Capital Management picking up the company. The sale is the culmination of a classic PE strategy: recapitalize a family business to establish a platform in a fragmented industry, bolt on several acquisitions to expand the business to multiple manufacturing plants, bring in new senior leadership, and grow revenues. Rohrer grew under Shoreview’s guidance to seven manufacturing facilities and revenues had increased from $67 million to over $200 million. Rohrer produces a wide array of printed paperboard and thermoformed packaging, with expertise in blister cards and folding cartons, serving a wide variety of consumer product companies.

SupremeX, the Canadian envelope and packaging company based in LaSalle, Quebec, acquired Vista Graphic Communications.* Vista, based in Indianapolis, is a manufacturer of folding cartons and specialized micro flute packaging solutions, primarily serving the medical and dental markets. SupremeX was established as an envelope printing company in 1977, was acquired by Cenveo (né Mail-Well) in 1995, and subsequently spun out from Cenveo in 2006 in a public offering on the Toronto exchange. With several acquisitions of envelope companies under its belt, the company strategically added packaging to its offerings with the 2017 acquisition of folding carton company Stuart Packaging, located in Mont-Royal, Quebec. The 2018 purchase of G2 Printing in 2018, also in Quebec, brought labels and additional folding carton capacity into the mix at SupremeX.

Resource Label Group, the serial acquirer of label printing companies, announced another acquisition, the purchase of New England Label in Andover, Mass. Resource Label, headquartered in Franklin, Tenn., with financial backing from First Atlantic Capital and TPG Growth, has grown to 18 manufacturing sites across the US and Canada. Capabilities at the most recently acquired company include screen printing to manufacture nameplates and graphic overlays.

Dunes Point Capital, a new entrant into the PE-backed frenzy to consolidate the label business, announced the formation of Premium Label & Packaging as its platform entity. Simultaneous with the announcement, Premium acquired Label Graphics Manufacturing, a label and shrink sleeve company based in Little Falls, N.J., with a second facility in nearby Fairfield, N.J. Dunes Point also owns Overnight Labels, a manufacturer of pressure sensitive labels, shrink sleeves and flexible packaging located in Deer Park, N.Y.

The Imagine Group (né Imagine! Print Solutions), a retail display and commercial printing company based in Minneapolis, was purchased by an investment group headed up by Cerberus Capital Management. Focused on point of purchase displays and related design services, Imagine has made several acquisitions, beginning with the 2013 purchase of Classic Graphics in Charlotte, N.C. Imagine was itself acquired by private equity fund Oak Hill Capital Partners in January 2016, and later that year purchased Midnight Oil, a creative agency based in Burbank, Calif. During the past pandemic year, revenues at Imagine declined to $419 million from $471 million, driving the company to restructure its capital stack. The company reports that the recapitalization has reduced the debt from $550 million to $100 million, positioning the company to regain its footing and return to a growth mode.

Grossman Marketing Group, a Boston area company, acquired PCI Creative,** a Stamford, Conn., marketing, printing and mailing company. The Grossman company dates back to its founding 1910 as the Massachusetts Envelope Company. Via a series of acquisitions and name changes over the past century, and now under fourth generation management, the company has evolved into a full-service marketing services provider. Services include fulfillment, graphic design, direct mail, printing, and promotional products, serving a wide range of clients including the educational, financial, and healthcare industries. The acquisition of PCI Creative supports Grossman Marketing’s strategic goal to expand their geographic footprint, strengthening their position in the Connecticut market.

* Graphic Arts Advisors, publisher of The Target Report, served as exclusive advisors to Vista Graphic Communications in this transaction.

** Graphic Arts Advisors, publisher of The Target Report, served as exclusive advisors to PCI Creative in this transaction. 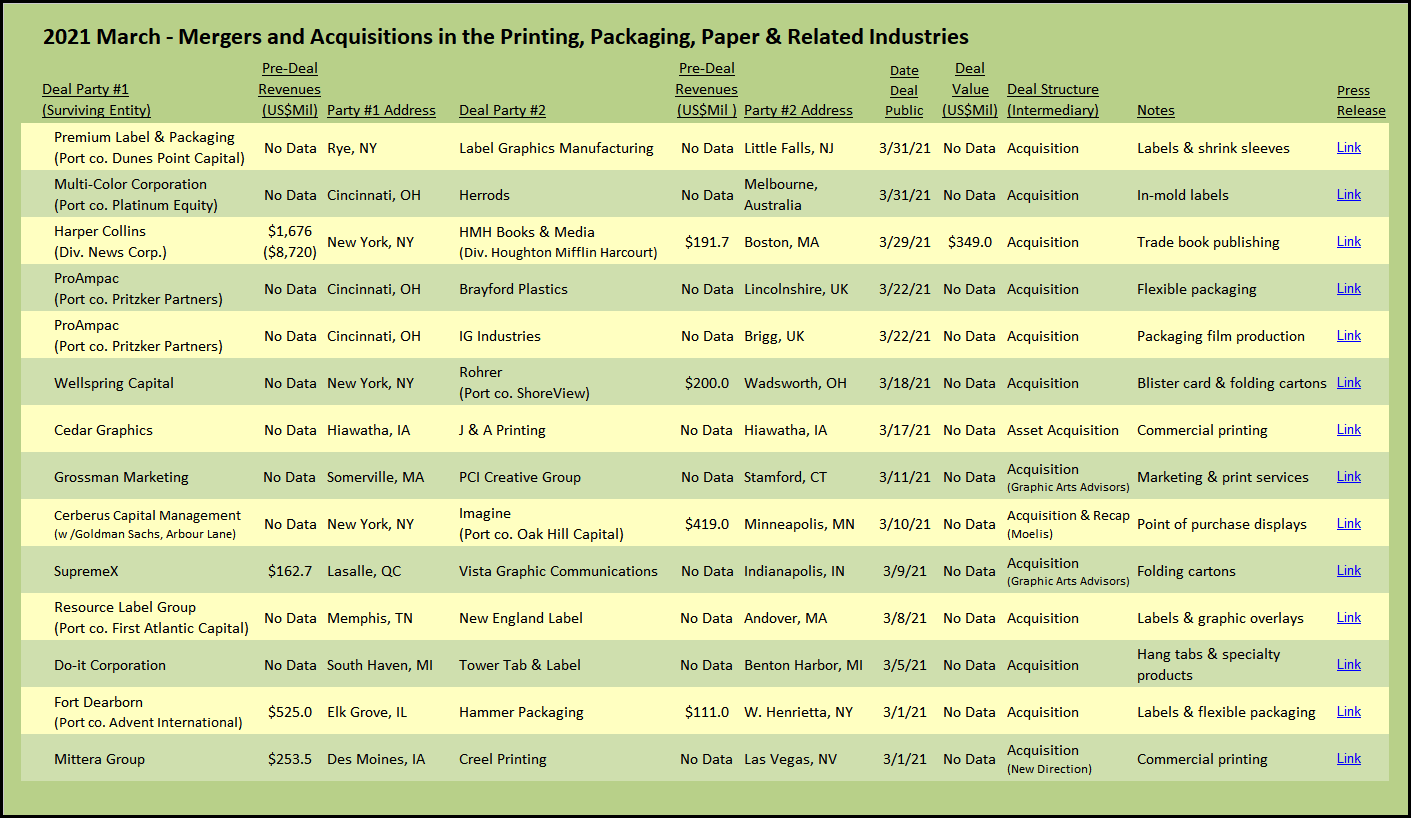