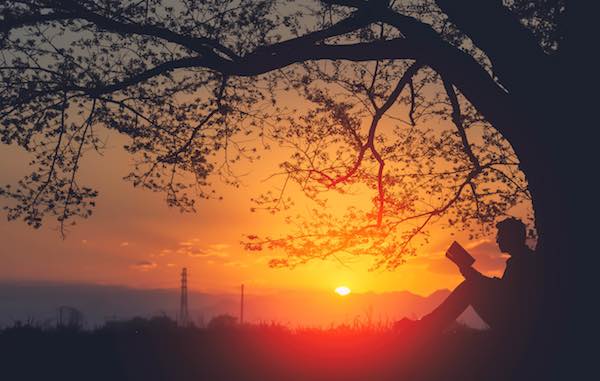 The statistics are clear: people around the world are reading more during this time of pandemic-induced lockdown, social distancing, and free time. What better way to spend some enjoyable moments than to pick up that dog-eared copy of The Plague by Albert Camus that’s been sitting for years on your college bookshelf. Tired of being alone and feel cooped up? For company, sit back and read A Gentleman in Moscow, the current bestseller about an aristocrat who lives out his life confined to a tiny attic room in the grand Moscow Metropol hotel after the Bolsheviks remove him from his luxurious suite and threaten him with arrest and banishment to the gulag if he ever leaves the building. At a loss to understand the people marching in the streets arm-in-arm this summer? Buckle up and dig into How to Be An Antiracist. Seeking steamy romance? Well, let’s just say that’s not my cup of tea when it comes to reading habits, so you choose.

Bertelsmann, the giant German media and publishing company, announced that it has emerged the winner in the bidding for Simon & Schuster, a division of ViacomCBS. Bertelsmann reportedly was the clear frontrunner out of more than half a dozen initially interested buyers, with the final bid winning out over second place News Corp, owner of publisher HarperCollins. Bertelsmann confidently stated that it will finance the $2.175 billion deal out of existing cash reserves due to its positive business results this year. You might say that the publishing business has been good to Bertelsmann of late.

ViacomCBS put the publishing entity on the block as part of its strategic plan to divest non-core assets and increase investment in content and streaming platforms. The cash deal unquestionably also helps ViacomCBS shed some of its current $19.7 billion debt load. However, by selling off the profitable Simon & Schuster publishing unit, ViacomCBS is losing control of blockbuster titles and content from the likes of Stephen King, Dan Brown, Bob Woodward, Hillary Clinton, Doris Kearns Goodwin, and Walter Isaacson, among many others.

Simon & Schuster is one of the remaining “big five” book publishers. According to some in the publishing industry, the deal, if approved by regulators, will give Bertelsmann approximately a 50% share of the books published for the general reading public. Apparently using a different definition of the publishing industry, the CEO of Bertelsmann claimed that the merged entity would have less than 20% of the US market and he expected that the deal would be approved by the regulatory authorities. Several industry groups have already called for the US Department of Justice (and the Canadian Competition Bureau) to block the deal on the grounds that the combination will reduce competition between book publishers vying for authors’ work, and drive down the value of advances offered.

Loudest of all the protesters to the deal was the CEO of News Corp who blasted the proposed sale as anticompetitive, creating a “literary leviathan controlling 70% of the US literary and general fiction market.” Regardless of how the relative share of the publishing market is ultimately defined, it will certainly be interesting to see if our Justice Department is as worried about a dominant position in the ownership of book publishing and distribution, as it was over the printing of magazines (see The Target Report: Buyers are On The Move and On Track – July 2020).

Bertelsmann acted earlier this year to consolidate the book publishing industry when, in April, the company purchased the portion of Penguin Random House it did not already own (see The Target Report: The Penguin’s Native Tongue is Now German – December 2019). Not including the pending purchase of Simon & Schuster, Penguin Random House consists of more than 300 brands, or “imprints” as they are known in the publishing industry, including the Crown imprint which published Michele Obama’s book in 2018 and the recently released book by Barack Obama.

To make sure it can print all those books, Berryville Graphics, a manufacturing division of Bertelsmann, announced the acquisition of Quad’s book manufacturing operations in Fairfield, Pa., and Martinsburg, W.V. When the dust settles, the printing and binding of books in the US will have undergone a major ownership reshuffling. Quad is now effectively out of book manufacturing, instead focusing on its “Quad 3.0 Transformation” strategy to become an integrated marketing solutions provider. Meanwhile, LSC Communications, which has shed non-core assets in its bankruptcy proceeding, but held onto its book manufacturing capabilities, is now owned by private equity firm Atlas Holdings. Not to be ignored, CJK Group picked up other pieces of the US book manufacturing capacity jettisoned by Quad, and more recently acquired publishing software assets to support its largely book-centered roll-up of printing companies.

It remains to be seen if the surge in demand for books will outlast the pandemic. In the meantime, reports are that sales of printed books are up. However, due to the shake up in the market and years of consolidation and plant closures among book manufacturers, the remaining book manufacturing companies cannot keep up with demand. (When was the last time you heard that in the printing business?) As a consequence, some publishers have had to delay release dates, pushing new titles out past the 2020 holiday shopping season.

The demand for digital books, which seemed to have hit a plateau before COVID-19 hit, is also surging, consistent with the digital acceleration in most aspects of our pandemic lives. Nonetheless, print remains the dominant form when readers want to hunker down and cozy up to a good story about dystopian worlds, social justice and, ahem, you know, steamy romance…

Consolidation is rolling along at a steady pace in the label business. I.D. Images, a national roll-up of label manufacturers focused solely on serving customers exclusively through print distributors, acquired Pointil Systems. The acquired company, based in Portland, Ore., specializes in variable information labels used in a variety of industries ranging from forest products, food, agricultural products, to medical. These industries use the variable-data labels, including barcodes, to track inventory and manage logistics throughout their supply chains.

Evergreene Tag & Label, located in Birmingham, Ala., acquired Dixie Labels and Systems in the Chattanooga, Tenn. region. Evergreene, a producer of labels for food and beverage, home goods, as well as industrial printing of nameplates and chemical-resistant product labels, announced that it plans to maintain production at Dixie Labels’ location. The acquired company serves similar markets and brings expertise in printing labels for the rug and flooring industries.

CCL, the Canadian-based, global roll-up of label companies, has purchased Super Enterprises Printing in Kuala Lumpur, Malaysia. The acquired company produces industrial printing products including decorative panels, liquid crystal and touch screen display covers, and in-mold components for consumer electronics and automotive suppliers. Once again, CCL, given its size ($3.95 billion US), is surprisingly willing and able to purchase relatively small companies. Super Enterprises reported trailing twelve month sales of $20.2 million. CCL paid $15.3 million, 6.7 times the adjusted EBITDA of $2.3 million. Maybe it should not be a surprise, as CCL consistently pursues specialized companies in the label industry, regardless of size (see The Target Report: Sticky Discipline for the Label Business – May 2016).

Graphic Village, the roll-up portfolio company of Revitalize Capital based in Cincinnati, Ohio, announced another deal, right in line with the company’s strategy of building out a multi-prong diversified graphic services provider in the region. In this latest deal, a tuck-in, Graphic Village has acquired Advance Printing, formerly also a Cincinnati company. 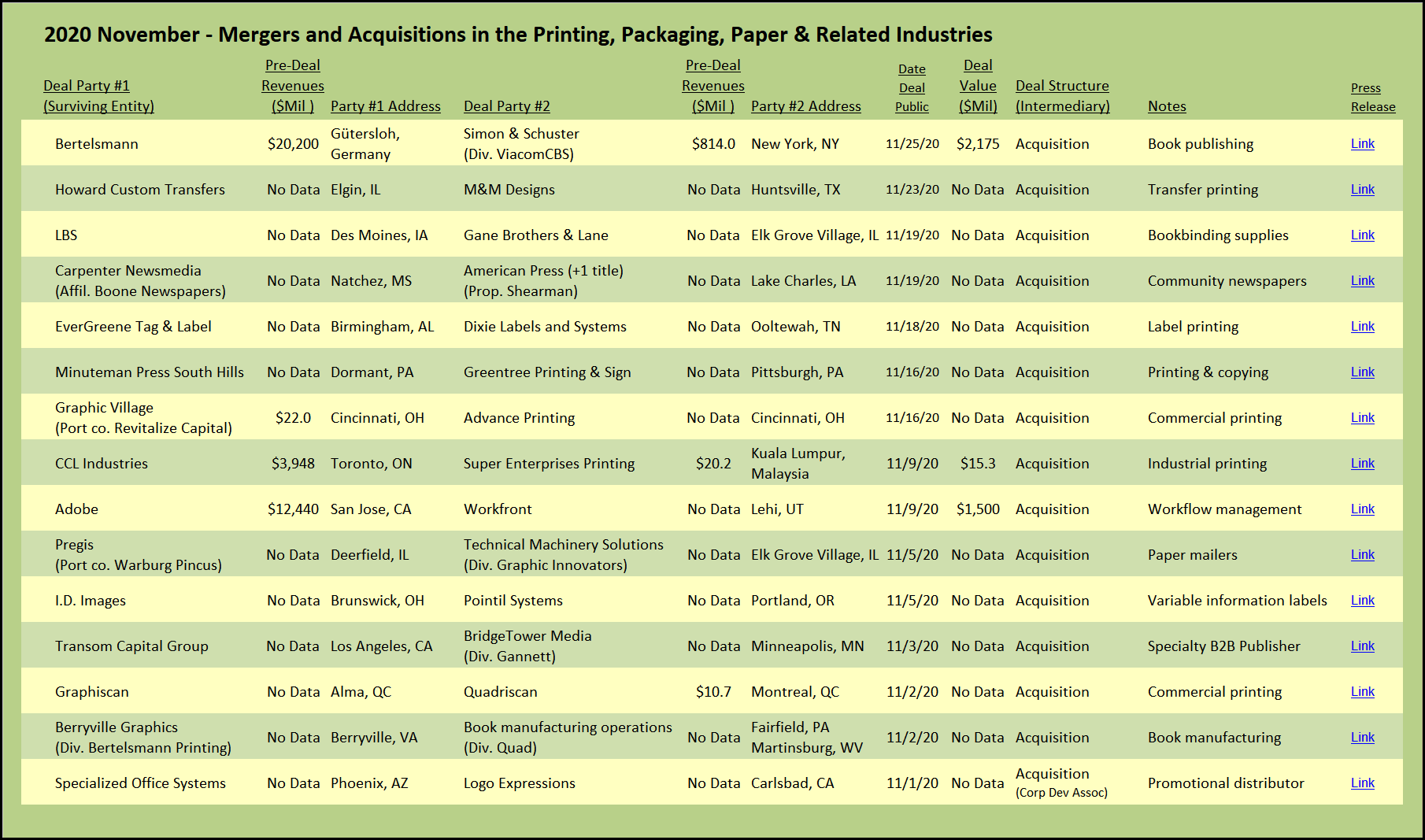