Why get a smartwatch or some other wearable when you can get electronic skin? Global fashion industry profits are expected to plummet precipitously this year. Winners of this year’s International Landscape Photographer of the Year Awards. One word: monolith. Theaters get creative in staging “A Christmas Carol.” Gift ideas for designers and type lovers. A bank turns its building into an Advent calendar. Good grief: Zoom Santa. Get your Santa mask! All that and more in WhatTheyThink’s slowly getting into the seasonal sprit miscellany.

(Three words that have probably never appeared together before.)

Leeds is stuck in tier 3 and I’m starting to think I should have had more hobbies than eating in restaurants.

Researchers at the University of Colorado Boulder have developed “electronic skin” that could eliminate the need for bulky smart watches and other electronic gadgets that  ultimately contribute to landfills. Wear it on your wrist or neck—but maybe not on your face unless you want to look like Arnold Schwarzenegger peeling his face off in the Terminator series.

A new HanesBrand single-use surgical mask has received Emergency Authorization Approval from the USDA. In this collaborative effort, HanesBrand goes beyond stockings and intimates to bring more safety in a difficult time. Says BusinessWire:

The Hanes mask uses a duckbill shape for better breathability, a wire nosepiece and foam insert to enhance a contoured fit, and placement of stretchable straps for a secure fit. UNC Health tested the masks to assure they meet FDA particulate filtration standards and OSHA respiratory protection program requirements.

Would a Xenomorph wear a mask

McKinsey’s calculations, based on the changes in market capitalizations over time in its index of global fashion, suggest that the industry’s economic profit will fall by 93 percent in 2020 after rising 4 percent in 2019. Not a pretty picture. Yet many executives still see silver linings. Full report available here.

Over at The Atlantic, some highlights of this year’s International Landscape Photographer of the Year contest. The winner was Hong Kong’s Kelvin Yuen, who won “for his images of Norway, Scotland, and the American Southwest.”

Check out this video which covers the contest and looks at some of the winning entries. There is some truly amazing imagery here.

And of course where are landscape images displayed? In a landscape gallery which, per one of our favorite cartoons, is different from a portrait gallery. 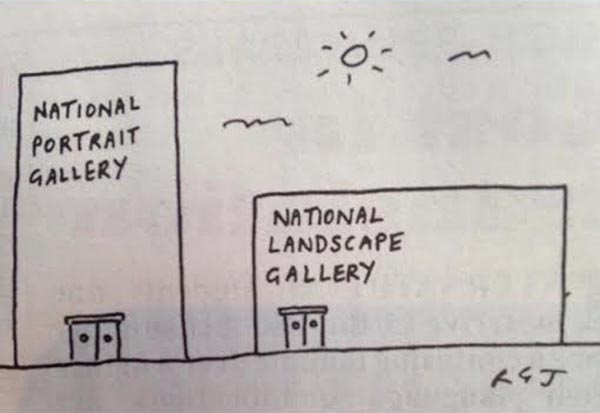 Find Strength in What Remains Behind

stopped dead in my tracks to take this photo. Have waited my whole life for this. pic.twitter.com/7nWvQf91Fv

The story so far:

Last week: “Workers with Utah’s Department of Public Safety discovered a giant hunk of metal in the Utah desert. They don’t know where it came from.” 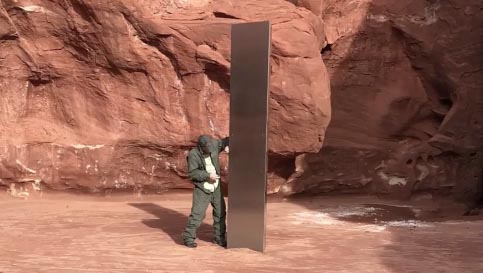 Later, That Same Week: “Metallic Monolith In Utah Vanishes Just As Mysteriously As It Appeared”

The Next Day: “Another Mysterious Monolith Suddenly Appears — This Time In Romania”

This Week: “A photographer said four men dismantled the mysterious shiny object that has captivated the country. Two Utah residents said they took part in the removal.”

The Internet does its thing:

Ah sh*t the monolith is at Hilltop now pic.twitter.com/I06Xa00GsS

The mysterious monolith has appeared on the TED stage. pic.twitter.com/2jrp0Ml4tE

And now, for your NSFW watching pleasure, a rather well-done animation of Stan Lee swearing.

Turn Back the Cluck

Do you have chickens? Well, why not—and none of your poultry excuses! Anyway, if you do, do you suspect that they have a secret longing to reclaim the glory lost when their evolutionary forebears went extinct? Well, now you can spice up your next hen party by letting them try to recreate the days when dinosaurs walked the earth with, via Boing Boing, these 3D-printed T. Rex arms: 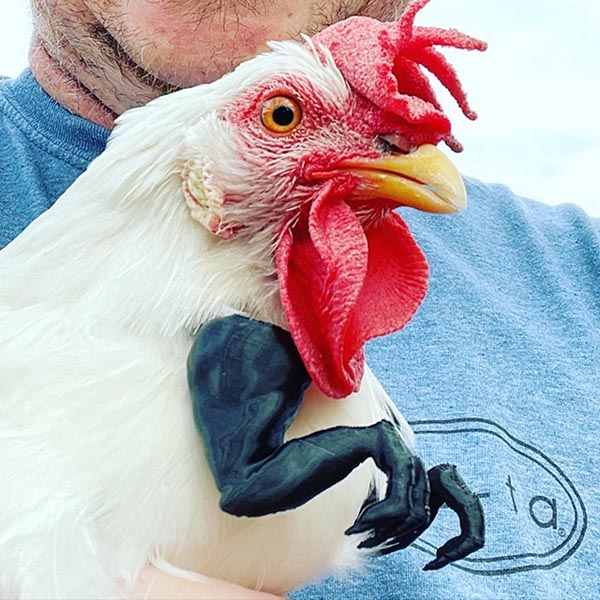 In fact, if you have a 3D printer, you can print them yourself. Really quite hendy.

Trying to watch Dr Fauci, but I keep getting distracted by the bad kerning on the "N" in WASHINGTON behind him. Yes, I know I have a problem. pic.twitter.com/KmM7l1x5Yu

In a year in which live theater was adversely affected by cancelled performances, the Christmas season is dealing perhaps the biggest blow of all: the inability to stage “A Christmas Carol,” which for many theaters and troupes, is the one performance of the year that funds many, most, or all of the others. So, via the New York Times, some theaters are getting creative. And is Zoom involved? Not always, so that’s good.

Gone are the large-cast extravaganzas playing before cheery crowds in packed venues. Instead, theaters are using every contagion-reduction strategy they have honed during the coronavirus pandemic: outdoor stagings, drive-in productions, street theater, streaming video, radio plays and even a do-it-yourself kit sent by mail.

Many of them are doing the stagings for free.

The financial implications are enormous, especially for those that have opted not to charge at all. Ford’s Theater in Washington last year sold $2.5 million worth of tickets to “A Christmas Carol.” This year, it is releasing a free audio version on its website and on public radio, paid for by corporate sponsorships and donations. “Hopefully it will come back to us in other ways,” said Paul R. Tetreault, Ford’s director.

When they are performing with a more or less full cast, some have tried to avoid casting children, lest they be exposed by an asymptomatic fellow cast member.

To portray Tiny Tim, the disabled child whose fate plays a key role in Scrooge’s awakening, some are now turning to the shortest adult members of their casts. The Lyric Theater of Oklahoma, staging an outdoor production at which patrons walk from musical scene to musical scene across the 10-acre Harn Homestead, is using a puppet so Tiny Tim can be hugged and hoisted without fear.

“God bless us, every puppet.” Some other ideas:

The Alliance Theater in Atlanta is opting for a drive-in “live radio play” in a parking lot across from a college football stadium. Four performers will be ensconced in separate shipping containers, with attendees encouraged to honk their horns, flash lights and sing along with Christmas carols.

And the St. Louis Shakespeare Festival has enlisted PaintedBlack STL, a coalition of local Black artists, to create scenes from “A Christmas Carol” in 21 storefronts around that city’s Central West End; as patrons wander from window to window, scanning a QR code will allow them to listen to the story as sung by the hip-hop Q Brothers Collective. On weekend nights, there will be live performers along the route.

From its warehouse home in Chicago, Manual Cinema will livestream an original adaptation featuring shadow puppets and murder hornets and a new character, the contrarian Aunt Trudy.

Murder hornets? And since this involves print, we’re enthusiastic:

New Jersey’s McCarter Theater Center is offering $40 gift-wrapped boxes with abridged staves (Dickens-speak for the novella’s sections) as well as cards to prompt conversation, or just to color. Sarah Rasmussen, the theater’s artistic director, hopes families will perform and explore the tale themselves. “Storytelling can happen anywhere,” she said.

At any rate, if a live production of “A Christmas Carol” is part of your holiday tradition, no doubt you can find a way to keep Scrooge in your plans.

Wondering what to get the design and/or typography lovers on your Christmas list? No, nor were we, but for those of you who, via the previous story, have already been visited by the three ghosts, over at I Love Typography, check out 100 hundred ideas. How about a gift subscription to the Font of the Month Club? Want fonts more often? How about a font-of-the day tear-off desk calendar? A pair of Footnotes socks? Something for everyone. 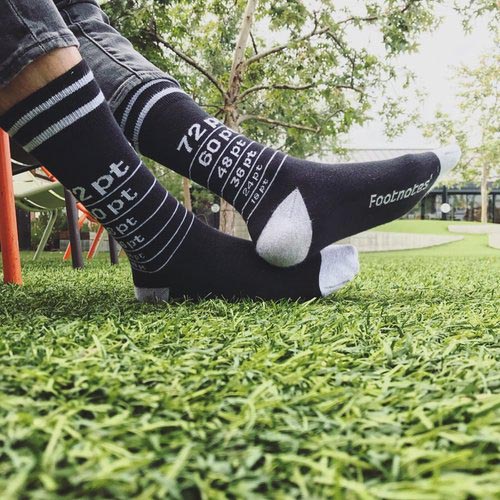 Not really a printing press but a keyboard waffle iron, #bookhistory nerds. pic.twitter.com/0X55IMf6pz

One fun Christmas tradition is the Advent calendar—standalone or wall- or fridge-mounted calendars by which you count down the days until Christmas by opening a little door each day. Sometimes there is a treat behind each door like candy or chocolate, a toy, or, especially this year, some kind of potent potable.

In Crowley, La., however, via CNN, the First National Bank of Louisiana is taking the Advent calendar to new heights, transforming their entire building—a skyscraper built in 1920—into a giant Advent calendar, using window graphics and blinds to count down to Christmas. 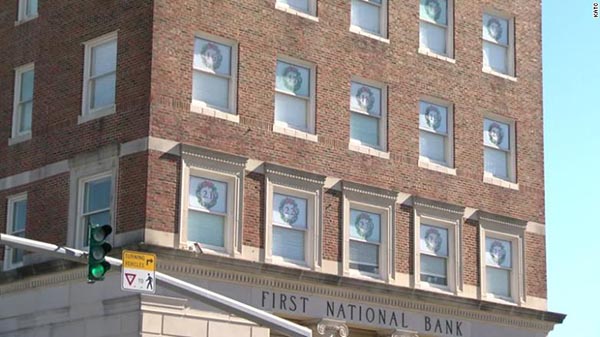 We’re not sure if there is any gift involved—maybe as each day is opened, a different bank employee can be revealed. “Look, Mommy, today I got a loan officer!”

Do you (or, hopefully more specifically, your children) miss getting the chance to sit on Santa’s lap this year? Well, that’s obviously not going to happen, but as the demoralizing dystopia that is 2020 marches inexorably on, this Christmas we get...Santa on Zoom. Via Gizmodo:

Macy’s, which has hosted Santa at its store in New York City for nearly 160 years, has scrapped in-person visits this year....Instead, it will offer virtual visits through its “Macy’s Santaland at Home”experience, which will allow kids to take a tour of Santa’s workshop and take a selfie with him. Santaland will offer other activities, including helping the elves pack his sleigh, and is now live.

On Comet! On COVID!

One thing you don’t want to either give or receive this holiday season is a deadly virus. But that doesn’t mean you can’t be safe and festive. We give you, via Joopzy, the Santa Beard face mask: 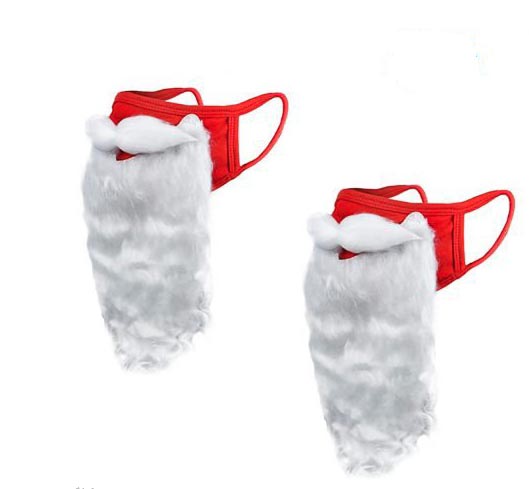 1971: The Soviet space program’s Mars 3 orbiter releases a descent module. It lands successfully but loses contact. It is the first man-made object to land softly on the surface of Mars.