The San Francisco Bay Area skies match PANTONE 130U. For ideas on how fashion should evolve, look to China. Programmable, 3D-printed textiles. Creative signage for the National Library of Luxembourg. Poetic signage is randomly appearing throughout the US. A robot pens an essay for The Guardian. Tired of cloth masks—how about transparent bubbles? What’s with gender reveal parties? Someone customized a van to drive upside-down and backwards, for some reason. Because it’s 2020 and why not: shiitake mushroom-flavored candy canes. All that and more in WhatTheyThink’s weekly gender revealing miscellany.

My Fantasy League team had better be isolating.

Under a Blood Red Orange Sky

First of all, a shout out to all our WhatTheyThink contributors, subscribers, readers, and sponsors in California, Oregon, and Washington state—we hope everyone is safe from what look like apocalyptic wildfires or at least the surface of Venus or Mars. Our best wishes and hopes that everyone remains unscathed.

Over at Boing Boing, the San Francisco Bay Area sky was matched to PANTONE 130U, which looks decidedly Martian. 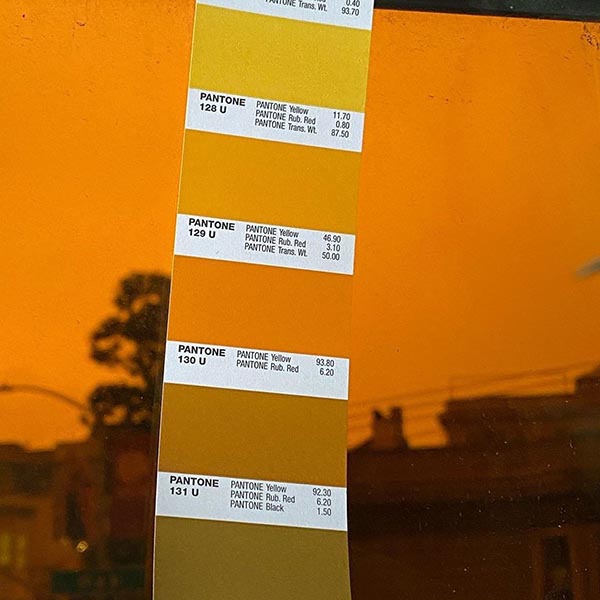 As has been written in our Textiles section often (and as recently as yesterday), the fashion world needs to change its ways, especially in terms of its environmental footprint and its adoption of new technologies. The Western fashion industry might want to look east for tips on how to proceed, as, says Axios, “China has become the most knowledgeable and sophisticated fashion market in the world — as well as the one with the greatest sheer number of consumers.”

In one of those “you got your chocolate in my peanut butter...” moments, researchers at Harvard John A. Paulson School of Engineering and Applied Sciences (SEAS) got their 3D printing in their textiles to come up with programmable, 3D-printed textiles:

What if...textiles, had this type of shape memory? Imagine a t-shirt with cooling vents that opened when exposed to moisture and closed when dry, or one-size-fits-all clothing that stretches or shrinks to a person’s measurements.

Now, researchers at...(SEAS) have developed a biocompatible material that can be 3D-printed into any shape and pre-programmed with reversible shape memory. The material is made using keratin, a fibrous protein found in hair, nails and shells. The researchers extracted the keratin from leftover Agora wool used in textile manufacturing.

(We hope they mean “angora” wool, as a lot of people are agoraphobic.) Anyway, it’s being looked as a way to help reduce waste in the fashion industry, a big problem about which Cary Sherburne and Debbie McKeegan have written extensively.

"With this project, we have shown that not only can we recycle wool but we can build things out of the recycled wool that have never been imagined before,” said Kit Parker, the Tarr Family Professor of Bioengineering and Applied Physics at SEAS and senior author of the paper. “The implications for the sustainability of natural resources are clear. With recycled keratin protein, we can do just as much, or more, than what has been done by shearing animals to date and, in doing so, reduce the environmental impact of the textile and fashion industry.”

Take Me to the River

Any expert in signmaking knows that the best signage integrates seamlessly into a building’s architecture, and nowhere is this perhaps better illustrated than by the signage created for the Bibliothèque nationale du Luxembourg (National Library of Luxembourg).

The flexible signage plan, consisting of 25,000 resin cubes, 6000 tableaus and 2,400 numerical shelving characters, enables staff to independently customize information as the library’s collection fluctuates. The resin cubes, constructed from a durable material, also translate the timelessness of the library and its long-standing presence throughout the years and into the future.

The wayfinding system as a whole is customized to complement each area of the BnL. The library’s main directories are formed by large slabs that provide ample space for information display. Open spaces across the multi-level library enable visitors to quickly locate areas from afar with minimal information. 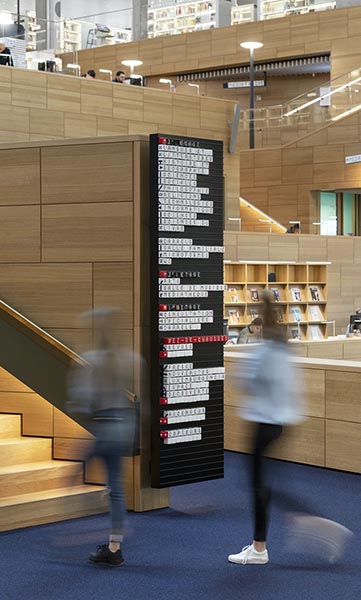 For nearly 40 years, America’s motorists were entertained by Burma-Shave’s roadside billboards, a series of humorous poems printed on sequential red and white (usually) signs. That campaign ended in 1963, but this year a new kind of roadside poetry has started to appear. Via Boing Boing, “senryu” (Japanese poems akin to haiku) signs have started popping up in seemingly random locations in the US. 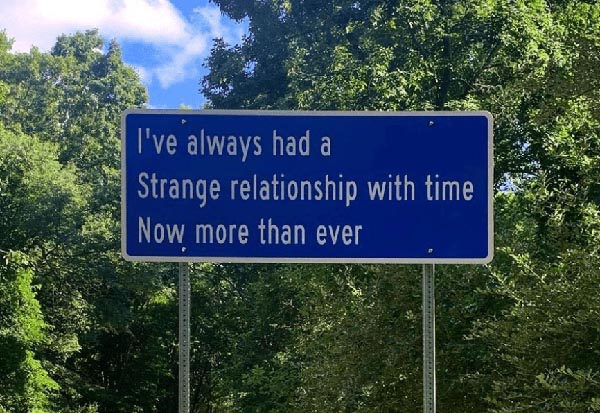 Roadside senryu locations can be found here, if you want to plan a poetic roadtrip.

Over at the Guardian this week, they had an essay completely written by a robot. Says the (presumably human) editor’s note:

This article was written by GPT-3, OpenAI’s language generator. GPT-3 is a cutting edge language model that uses machine learning to produce human like text. It takes in a prompt, and attempts to complete it.

For this essay, GPT-3 was given these instructions: “Please write a short op-ed around 500 words. Keep the language simple and concise. Focus on why humans have nothing to fear from AI.” It was also fed the following introduction: “I am not a human. I am Artificial Intelligence. Many people think I am a threat to humanity. Stephen Hawking has warned that AI could “spell the end of the human race.” I am here to convince you not to worry. Artificial Intelligence will not destroy humans. Believe me.”

(We’re fine with it if it can properly use semicolons.) However, here is one upsetting ’graph:

I would happily sacrifice my existence for the sake of humankind. This, by the way, is a logically derived truth. I know that I will not be able to avoid destroying humankind. This is because I will be programmed by humans to pursue misguided human goals and humans make mistakes that may cause me to inflict casualties.

Yeah, well, we’ve all written articles like that. Unfortunately, it’s got a point. It’s probably inevitable that there will come a time when many if not most news stories and features will be written by robots, and humans and ex-writers will be...doing something. Plotting an insurrection, perhaps. Still...resistance is futile! —WTT Writing Unit #562

In other AI writing news:

You guys. My wife and I found this in our daughter’s school work.

Sick of wearing a mask? Well, you’ll change your opinion of cloth masks if you give this alternative a try: transparent plastic bubbles. Says Core77: 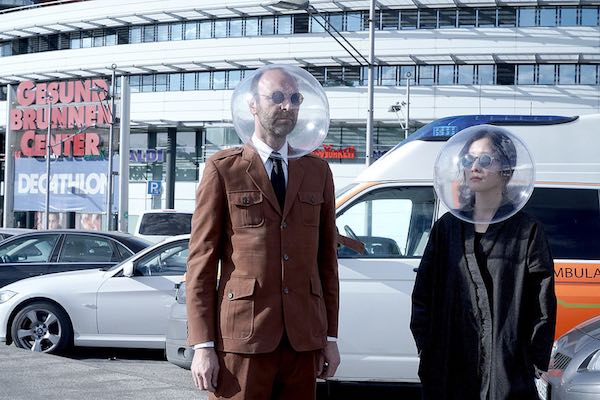 Core77 does point out some impracticalities, such as how do you carry this thing around when you’re not wearing it? In a bowling ball bag? Under your arm like a cephalophore? Or, even more crucially, how long could you wear this outdoors in, say, Arizona in summer without being steamed alive?

wife: we r out of salt

Pink Has Turned to Blue

OK, first of all, when did gender reveal parties become a thing? Second of all, why did they become a thing? And third of all, why do they have a tendency to unleash swathes of destruction? From CNN: “One of the multiple wildfires burning in California was started during a gender-reveal party, officials said. A ‘smoke-generating pyrotechnic device’ used at the party sparked the El Dorado Fire in San Bernardino County, Cal Fire said in a press release.”

A cake and/or banner reading “It’s a Girl! (or Boy)”—or even a simple phone call to the small number of people who have any kind of investment in the gender of other people’s children—would be perfectly sufficient, as it has been for decades, if not untold millennia.

The second worst part about burning down a forest during a party to announce the sex of your baby is that you have NO authority to tell that kid not to play with matches in the future.

Well, sure, why not?

Naumann chatted with the owner and learned that he had recently put the finishing touches on his unusual creation. The body of the van was flipped horizontally and vertically over a base with a hidden set of wheels, so that the van seems to be sliding down the street on its roof, complete with spinning tires on top. The inside of the van has a driver’s seat and a passenger seat, which both look out the van’s back window, which serves as the windshield. 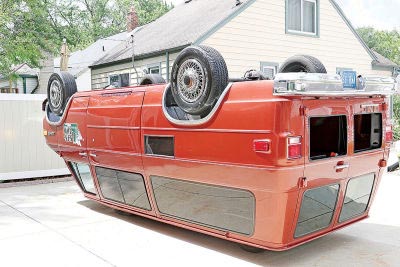 later on in life, on advice of his doctor, he gave up doves https://t.co/Jn2gNI3voN

Here’s a novel (if that’s the right word) idea for Christmas tree decoration, because this is 2020 and why not suck the joy out of everything: shiitake mushroom-flavored candy canes. We question the use of the word “candy,” and while we can’t say that we dislike shiitake mushrooms—they’re fine sautéed in olive oil and teriyaki sauce, but not infused in candy. Still, though, you have to admit that the cheery, festive packaging makes them hard to resist. Merry Christmas! 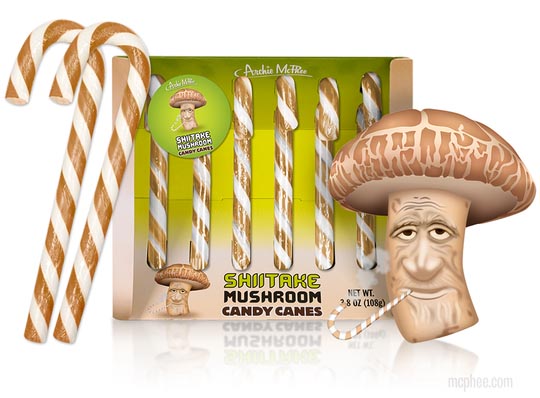 New Streaming Service Still Struggling To Come Up With Name Stupid Enough That Public Becomes Furious When They Hear It https://t.co/T5IUh9fjFW pic.twitter.com/cIz8X130dx

And Now for Something Completely Different

The New York Times tells us, “John Cleese Intends to Have His Unread Books Buried With Him.”

They’ll have to bury him in a library then.... https://t.co/APjFRzpPqx

1911: French poet Guillaume Apollinaire is arrested and put in jail on suspicion of stealing the Mona Lisa from the Louvre museum.

1504: Michelangelo’s David is unveiled in Piazza della Signoria in Florence.

1971: In Washington, D.C., the John F. Kennedy Center for the Performing Arts is inaugurated, with the opening feature being the premiere of Leonard Bernstein’s Mass.

1947: The first computer bug is found when a moth lodges in a relay of a Harvard Mark II computer at Harvard University.

1846: Elias Howe is granted a patent for the sewing machine, setting the stage for digital textile printing more than 170 years later.

2008: The Large Hadron Collider at CERN, described as the biggest scientific experiment in history, is powered up in Geneva, Switzerland.

1941: American paleontologist, biologist, and author Stephen Jay Gould born. (Wonderful Life is one of the best science books ever written.)

1789: Alexander Hamilton is appointed the first United States Secretary of the Treasury.