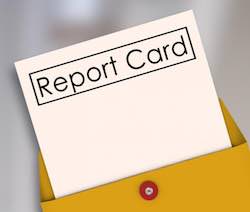 As readers of The Target Report know, we view the printing, packaging, and related industries from the perspective of M&A transactional activity. Over the past nine years, we have chronicled, logged, and commented on the robust merger and acquisition activity in the print-centric business segments. We traditionally take a break at this time of the year and depart from our usual review of the prior months’ deal activity to take a look back at the past twelve months from a macro high-level perspective. Our goal is to identify some long-term trends. Which segments have experienced more, or less, deal activity? What are the trends in rationale behind acquisition activity? Are acquirers adding facilities to their networks, or opportunistically folding acquisitions into their existing facilities? 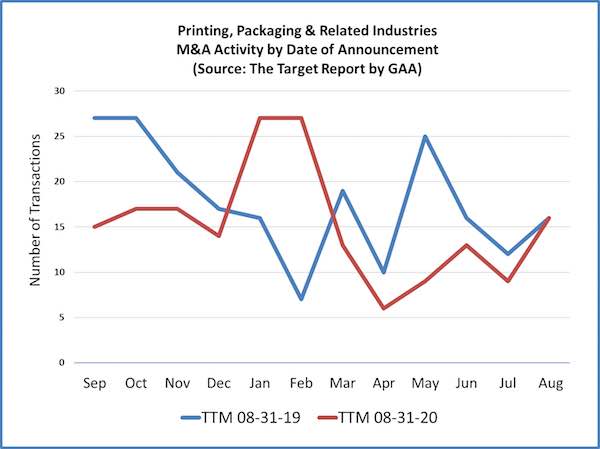 Of course, despite some returning semblance of normalcy, this year has been different, especially the past six months. The outbreak of Covid-19 has changed the economic landscape. Building personal relationships between seller and buyer are a fundamental element of most transactions and form the foundation for the most successful deals. Transactions are more difficult to bring to a close in a virtual world. Yet, despite the challenges, deals are getting done. As noted in our past two reports, buyers are marching forward, maintaining their strategic focus and closing deals. It is too soon to ascertain what the eventual impact of Covid-19 will be on the print-centric industries, yet some trends are beginning to emerge as evidenced by our research on transactional activity.

The bright spot is clearly packaging, with buyers exhibiting very keen interest in labels, corrugated cartons and to some extent folding cartons. There has been continued participation in the market by well-funded private equity firms and large corporate buyers. Flexible packaging remains highly desirable for buyers, but fewer deals are getting done involving flexible packaging as the supply of target companies is limited compared to other packaging segments.

Activity is up in the wide format segment; however, we make note of an increase in the number of tuck-ins in the wide format business, indicative of overcapacity, something almost nonexistent not too long ago. Presumably, some of this activity is due to the decline of “brick and mortar” retail, greatly exacerbated by the Covid-19 shutdown. This double-whammy has created a challenging situation for the wide format shops that are focused on retail signage and display. There was a flurry of printing the ubiquitous floor stickers and window signs announcing and enforcing the new social distancing requirements, but that has likely run its course by now.

Publishing in print form, with the exception of books, is in a virtual free-fall, with newspapers either headed online or closing down completely. Several major newspapers now claim significantly more subscribers to their online content than to their printed editions. More telling than numbers of subscribers, some have now even crossed the line where revenues from online subscriptions exceed those from print. Those “digital dimes” are adding up, while “analog dollars” continue to decline. That trend will continue. Magazines face similar challenges as advertisers shift dollars online and readers follow. In the case of catalog printers, print customers hit the “pause button” hard and fast as soon as the lockdowns began. How many catalogs do you get in the mail anymore?

Commercial printing establishments appear to be in a holding pattern for now, with deal activity appreciably less than in recent years. Many owners we talk with in the commercial segment are waiting to see if the good times will roll again when the virus is brought under control. Nonetheless, many are expecting the weaker players to begin to falter and seek shelter in a sale to a stronger player. That is consistent with our expectation; activity will increase in the commercial segment. Consolidation will pick up steam as government subsidies run out. However, we note that direct mail printing companies, especially those that can manage, manipulate, store, and utilize data to drive improved results for their customers, are likely an exception and in a class by themselves, apart from the more generalized undifferentiated “job-shop” commercial printing companies. 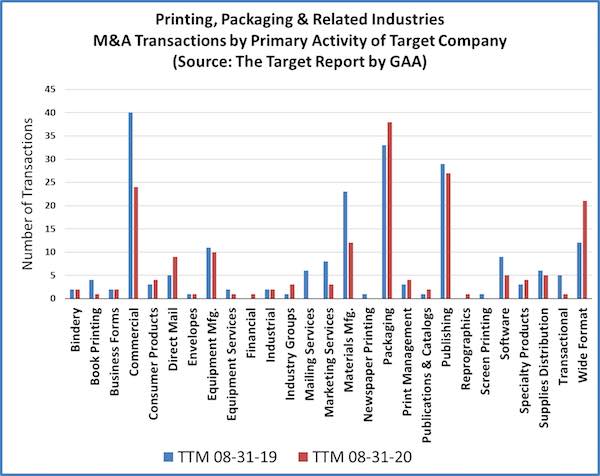 We did a deep dive into the rationale behind the transactions in the commercial printing segment and we find that the majority are once again tuck-in deals in which the customers of the acquired company are transitioned to the buyer’s production facility. In these tuck-in transactions, buyers will often leave the disposition of the plant and equipment to the seller, or to the seller’s agent, avoiding responsibility for trade and other debt, possibly “cherry picking” certain equipment that is needed or desirable for the smooth continued servicing of the acquired customers. In two instances out of the twelve tuck-ins, the transaction was a “reverse tuck-in” in which the buyer acquired the assets and facility of the seller and moved their business into the purchased company. As a percentage of total deals announced in commercial printing, tuck-ins dropped to 50%, compared to a whopping 70% last year.

There were eight acquisitions in the commercial printing segment where the acquired facility was important to the buyer and will remain in operation, four of these were sold to new owners that acquired the company in a fully operating mode. Two of those new owners were ESOPs transitioning ownership to the employees.

There were two acquisitions where the acquirer noted that the purchased company added to their service offerings, as well as two deals where the stated logic was to expand geographically. Of all twenty-four transactions that we found in the commercial printing segment, none had a private equity sponsor and consequently there were no companies purchased to form a new “platform” for building out a larger company. 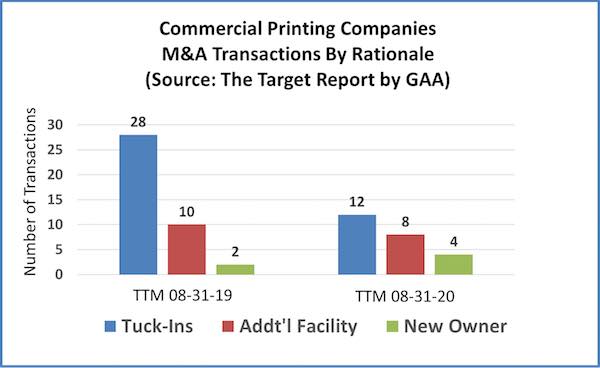 For our purposes in forming a picture of the various market segments that comprise the overall print-centric industries, we separate out companies that produce mostly wide format products from the more generalized commercial printing segment. Here we see proportionately fewer tuck-ins than in general commercial printing, but consistent with last year, about of quarter of the deals were tuck-ins, with the seller’s plant shuttered and production consolidated in the buyer’s existing facility. 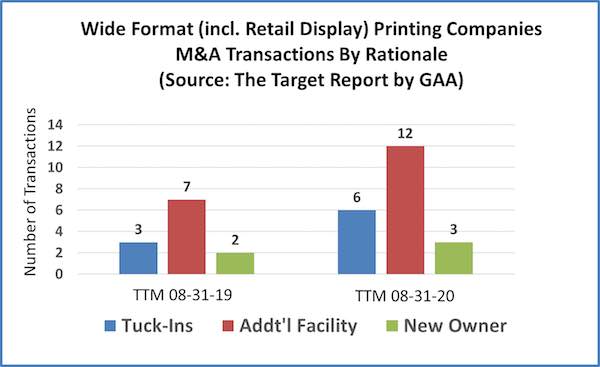 Three buyers cited adding or greatly expanding wide format as a service offering as the logic supporting the acquisition. Two buyers noted geographic expansion as important to the decision to move forward. Five transactions involved participation by private equity in the deal, with three of those creating a new platform company for the fund. These trends, especially the involvement of financial buyers and the establishment of platforms for bolting on acquisitions, are indicative of more M&A activity and consolidation on the horizon for wide format printing companies. 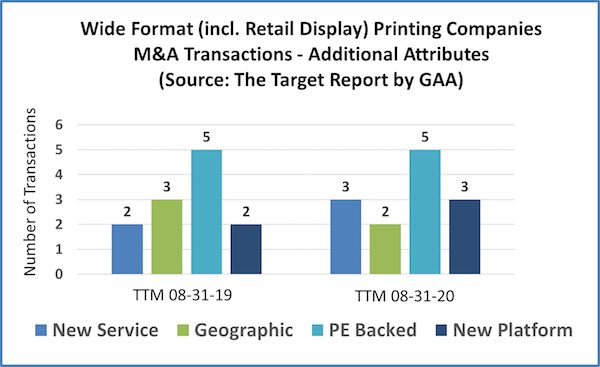 The picture that emerges in the packaging segment is very different. Of the thirty-eight transactions that we recorded over the past twelve months in the packaging segment, only four were reported to be tuck-ins, two that produced labels and two that manufactured corrugated boxes. In all the other cases, the buyers noted that the acquired location was an important element of the rationale to complete the deal. In some, the acquired company had multiple locations, or was global in scope. 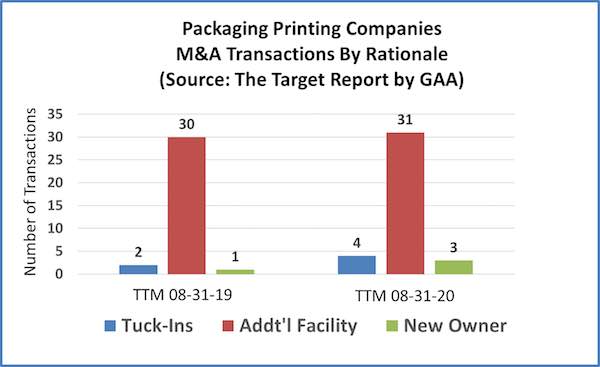 Nine of the buyers noted that the acquisition brought new services to the company, or significantly expanded on a small beachhead previously established in that service. For example, one high-end prime label printing company acquired a digital label printing company rather than continue to build out the internal effort. In nine instances, geographic expansion or diversity of the acquired locations was also noted as a key element in the buyer’s logic. 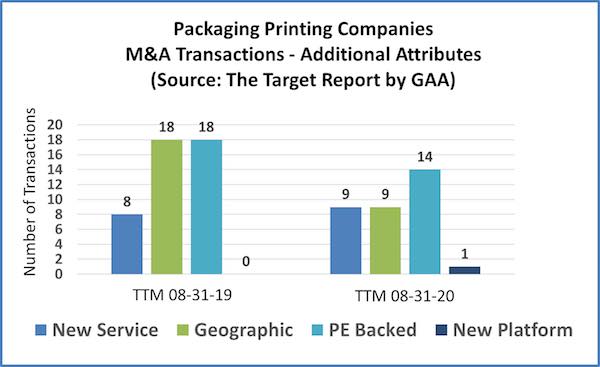 As noted earlier, activity with the packaging industry was predominately in the labels business, with many of the transactions marking the end of family ownership of independent single-location companies. There was also a steady flow of corrugated carton and paperboard folding carton companies coming to market and finding buyers. 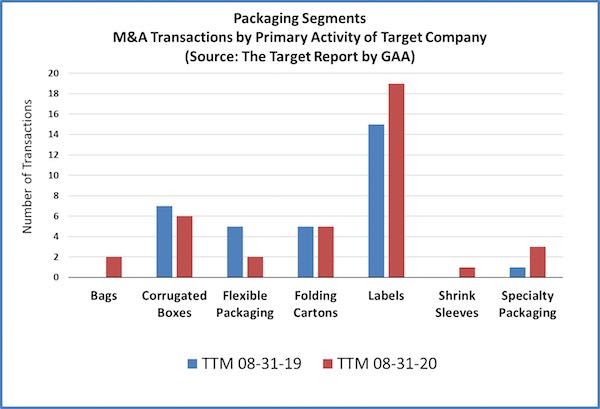 Transactional activity in direct mail printing was on the upswing over the past twelve months, with a total of nine deals announced, versus only five the prior year. The majority of these were additional facilities for the acquirers. Two were tuck-ins, compared to no tuck-ins last year. 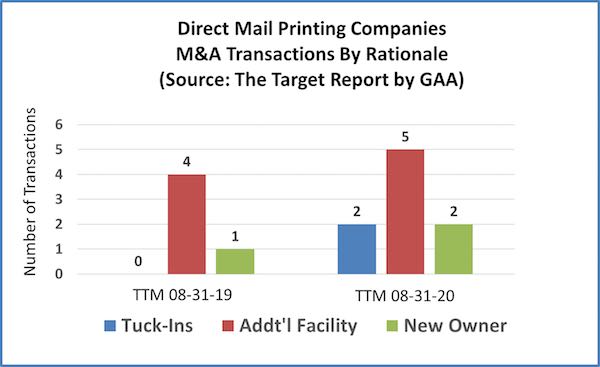 Of special note, four of the transactions in direct mail involved private equity backers, and two of those were new platforms. While deal activity is not as robust as in the wide format segment, indicators are beginning to flash that we will see some more consolidation occurring in the direct mail segment. 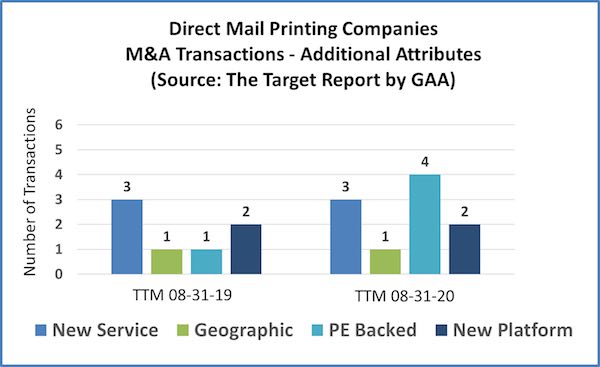 Transactional activity tells us that an industry segment is undergoing change, however the number of deals does not tell us if that activity is indicative of positive or negative change. To determine a directional indication, we track the number of bankruptcy filings and non-bankruptcy plant closures and correlate this information with the overall transactional activity. Our thesis, born out over several years and confirmed by industry stats derived from other sources, is that an industry segment with a high number of transactions that is also experiencing closures and bankruptcies is, or will be, in a contraction phase. There will be opportunities for consolidation at bargain prices for those companies that defy the downward trend. This has certainly been true in the commercial printing segment (and obvious to even those outside our industry).

Conversely, segments in which the number of transactions does not correlate directly with closures and bankruptcies are more likely to be expanding and consolidation opportunities will come at much higher prices. Virtually all the packaging segments are experiencing steady transactional activity, without the corresponding bankruptcy filings and plant closures, indicating a very healthy environment for sellers as the packaging industry consolidates.

Despite the outbreak of Covid-19, the number of bankruptcies for the past twelve months decreased to 36 filings, down from 41 the prior year, which was down from 45 filing the year before that. (We will continue to closely monitor this activity as the economic impact of the Covid-19 virus plays out – stay tuned to The Target Report.) 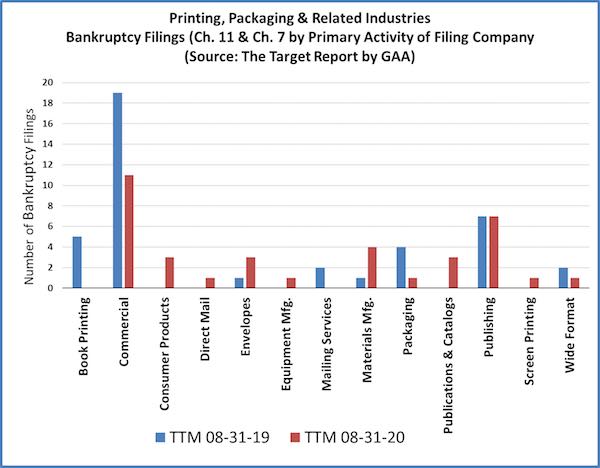 And finally, we also track activity in non-bankruptcy plant closures; many companies simply close up and just disappear without a formal bankruptcy filing. Other times, a closure does not mean that the company has ceased operating, it may simply be that one of the larger printing firms is “rationalizing” their production capacity. Either way, closures are indicative of change, usually resulting from downward pressure in a market segment. Consistent with the other data and as expected, general commercial printing companies represent the majority of printing facilities closing up shop. Also consistent with the bankruptcy filing data, the number of non-bankruptcy closures in the past twelve months declined from the prior year, including the commercial printing segment. As also might be expected with the closing of the Cenveo (né Cadmus) plant, the closure of LSC plants in preparation for the company’s bankruptcy filing, and Quad’s quick response to Covid-19, there was an uptick of closures of publication and catalog printing plants. 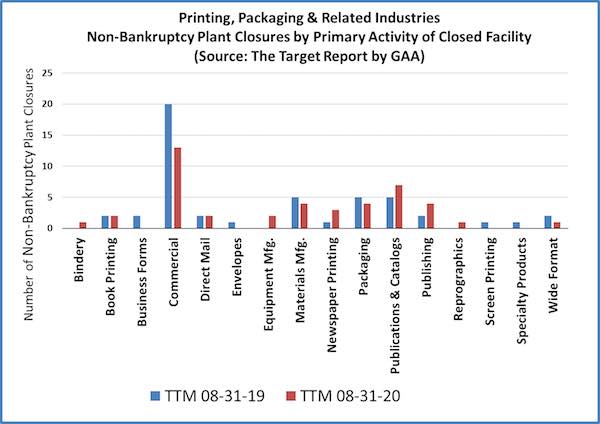 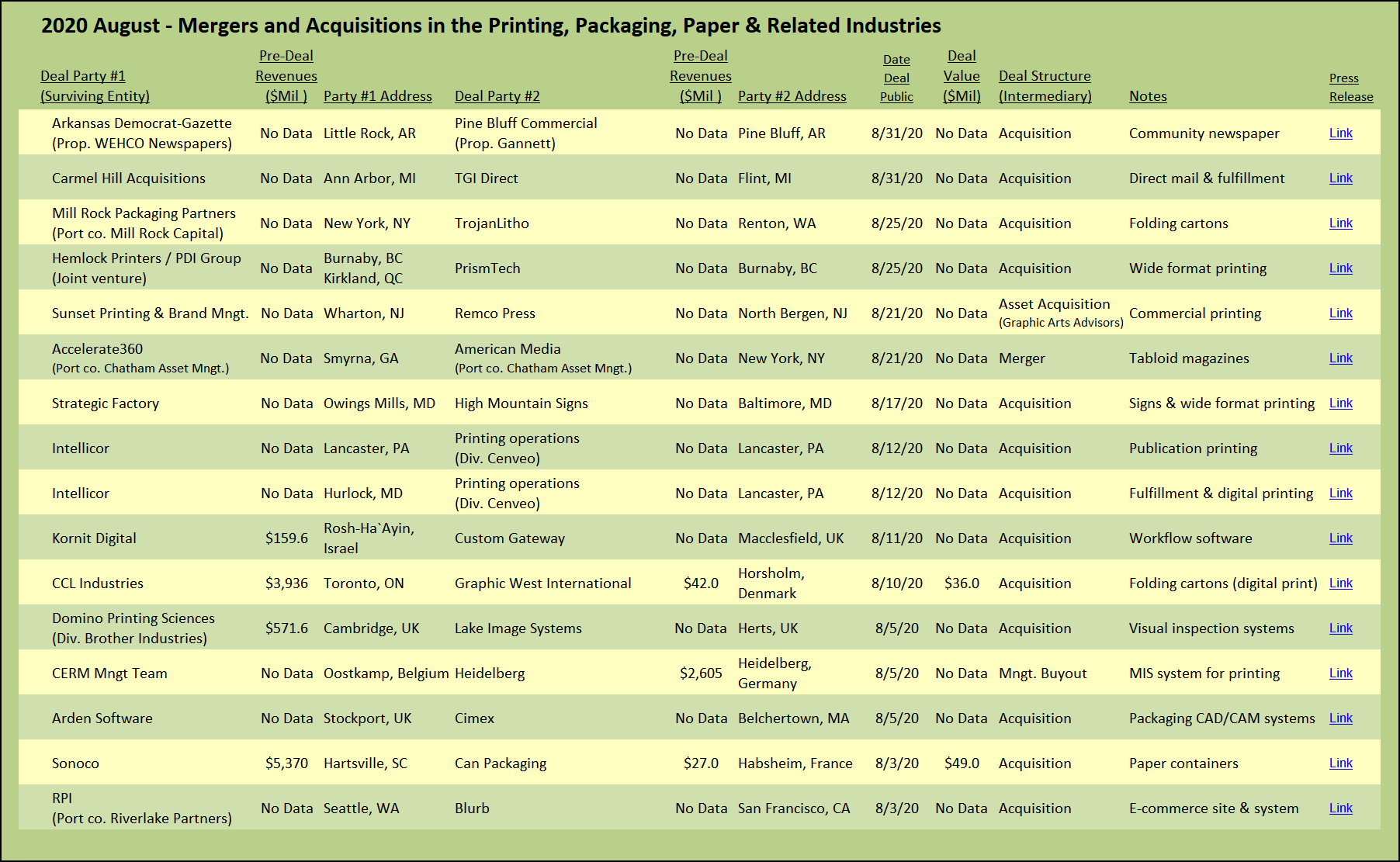