There will no longer be a Monday print edition of a newspaper anywhere in Wyoming. Amusing social distancing signage from Down Under.  How will the COVID pandemic affect architecture? Germany’s shoe-stealing fox. 3D-printed sneakers based on clouds. The Boatswagon boat-car hybrid is up for auction. 8Bit Playing Cards simulate 1980s-era computer graphics. A new, limited edition Etch a Sketch lets you draw circles. All that and more in WhatTheyThink’s weekly virtual miscellany.

U.S. Requires Hurricanes To Quarantine For 2 Weeks Before Traveling To Other States Along Coastline https://t.co/9hwbT0uv2Y pic.twitter.com/GO5HX46opU

Wyoming is about to earn the honor—if that’s what you want to call it—of being the first state that will not have a Monday newspaper edition in any city or town. Says Nieman Lab: “The Casper Star-Tribune announced yesterday that it would no longer be a true ‘daily’ paper, eliminating its Monday and Tuesday print editions next month.”

The Star-Tribune will continue publishing online news while offering electronic editions of its print newspaper — the e-edition — seven days a week, said President Michelle Robinson. Print editions will be published Wednesdays through Sundays, with plans for an enhanced Sunday newspaper.

The change is a reflection of reader demand, Robinson said, with an increasing percentage of readers, in Wyoming and elsewhere, choosing to consume their news digitally.

A question that has never before been asked, perhaps, is “how many kangaroos is 1.5m?” At The Guardian, some examples of how, in the face of increasing infections, places in Australia are getting creative and fun with social distancing signage.

At the University of Sydney’s veterinary teaching hospital, as Guardian Australia revealed in May, they use the motto: “Keep four koalas of space between you and others”.

In Queensland, the cassowary – whose claws are 12.5cm long – is the reminder of choice at Cairns airport. A few hundred kilometres south, at the Townsville campus of James Cook University, you need two of the smaller, and as far as we know non-lethal, bush turkey.

At the Hotel Hollywood in Sydney, a large yellow sign proclaims patrons should stay at least one adult kangaroo apart. 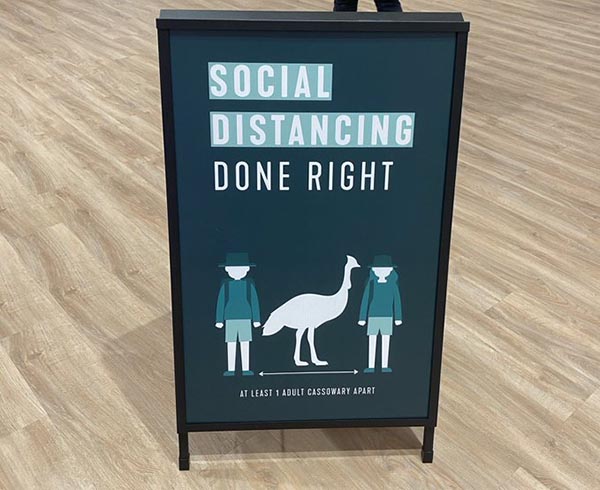 Choose your own preferred avifauna.

Every once in a while I still have to ask: pic.twitter.com/BUZPiCoIG1

My Building Has Every Convenience

There are few aspects of life that haven’t been affected by COVID-19 and it’s a safe bet that many changes the virus has brought will persist—perhaps even once it is a thing of the past, should that ever happen. The New Yorker recently had an article on how coronavirus will likely reshape architecture. After all, it’s happened before; the modernist architecture that emerged in the first half of the 20th century was inspired by the fear of tuberculosis, which was the number one killer at the time.

Much of modernist architecture can be understood as a consequence of the fear of disease, a desire to eradicate dark rooms and dusty corners where bacteria lurk. Le Corbusier lifted his houses off the humid ground to avoid contamination. Adolf Loos’s ultra-boxy Villa Müller in Prague, from 1930, included a separate space in which to quarantine sick children. Architects collaborated with progressive doctors to build other sanatoriums across Europe. “Tuberculosis helped make modern architecture modern,” the Princeton professor Beatriz Colomina writes in her revisionary history “X-Ray Architecture.” The industrialized austerity of Ludwig Mies van der Rohe or Marcel Breuer “is unambiguously that of the hospital,” the empty white walls, bare floors, and clean metal fixtures are all “surfaces that, as it were, demonstrate their cleanliness.”

And here we are again, with fear of disease determining how our public and private spaces will be designed.

Unlike the airy, pristine emptiness of modernism, the space needed for quarantine is primarily defensive, with taped lines and plexiglass walls segmenting the outside world into zones of socially distanced safety. Wide-open spaces are best avoided. Barriers are our friends. Stores and offices will have to be reformatted in order to reopen, our spatial routines fundamentally changed. And, at home, we might find ourselves longing for a few more walls and dark corners.

FRIEND: what r u watching

ME: [taking bite of edible food] i’m not sure what u mean

Masks are going to be a part of our lives for a while, so we may as well have fun with them.

Those of us who wear glasses have a particular problem with the lenses fogging up when wearing a mask—but, via Boing Boing, “Animator Takahiro Shibata made this delightful facemask that turns fogged-up eyeglasses into a fun feature of the design.” 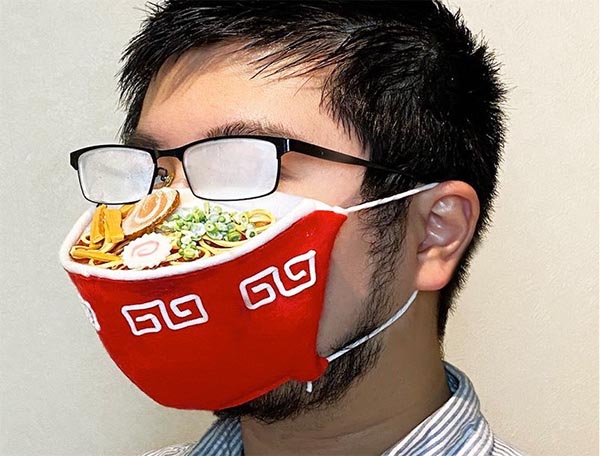 "I made a mask for people with glasses," reads Shibata's translated tweet. "The more clouded your glasses are, the hotter you can see the ramen."

We seem to have found a vulpine Imelda Marcos. From the BBC:

For weeks residents of Zehlendorf were baffled that a thief was stealing their flip flops and sports shoes from their gardens at night.

Finally a man spotted the culprit on a patch of wasteland, "in flagrante, carrying two blue flip flops in its mouth", the daily Tagesspiegel reports.

This, That, and the Other

The namers of this neighbourhood in Porters Lake, Nova Scotia appear to have run out of ideas. pic.twitter.com/1u59LoUUEF

We’ve looked at clouds from both sides...and we’re pretty done with clouds, especially after seeing this 3D printed footwear apparently inspired by different kinds of clouds. Even the fox would avoid these. From Core77:

Digital modeling and 3D printing have enabled today's designers to create novel objects of previously near-impossible form. Elaborate shapes have become a hallmark of the medium but thankfully form-giving as a practice has pulled back from a complete embrace of the aesthetic and now finds success with a restrained mix of those digital flourishes with classic surfaces. Japanese brand MAGARIMONO manages this trick in their new line of shoes. What makes it an interesting launch is that they've taken some of the creative strangeness cut from the formal resolution, and found a place for it elsewhere in their overall creative package. It counteracts the seriousness and sterility that can build up in tight digitally-enabled product development loops.

This footwear will be made to order, taking about 2 - 4 weeks for production and delivery. The collection drops June 19 online and in Tokyo. The four models, are available in sizes 22-28 cm at a price of $1,100 each. 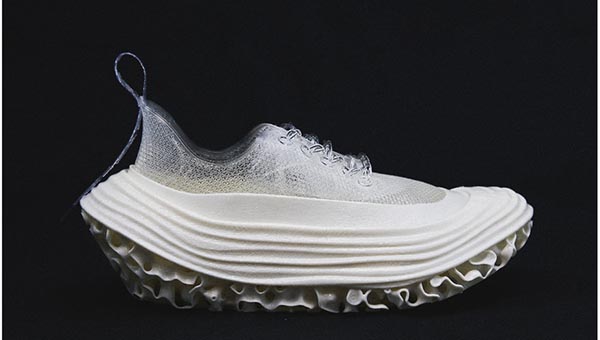 Let’s hope that price includes a podiatrist on retainer.

Say No to This

Opened up a kitchen drawer and found this ?? My kid has been watching too much "Hamilton"! pic.twitter.com/idOkLc1k4B

This Is No Place for a Convertible

If you can’t make it to the water but miss the boat (as it were), why not tool around in this 1973 Volkswagen Boatswagon—a yellow Volkswagen Beetle that was converted into a car-boat hybrid using the hull of a 1977 Chrysler Conqueror. (According to Core77, the owner built it for his daughter, “who thought it would be cool to have a carboat like the one in Sponge Bob.”)

It is up for auction, but caveat emptor: it is not even remotely seaworthy.

Love in Black and White

Kyoto Aquarium has a flowchart showing visitors the romantic relationships and breakups between their penguins. (Photo credit: @OliverJia1014) pic.twitter.com/KKLsqOzimL

A Wicked Pack of Cards

Do you miss 1980s-era computer graphics? Do you want a set of playing cards that simulates the experience of having cataracts? If so, then troll your lenses with the 8Bit Card Deck.

My name is Michael B. Myers Jr. (drawsgood) and I am a huge fan of pixel art and retro gaming. In 2019, I began designing a few face cards for what, at the time, might have been an 8-Bit solitaire game or something similar. As the process continued, the idea of making these pixel art cards in to actual high-quality playing cards came to mind, and thus the 8Bit Deck was born. Each card has been crafted pixel by pixel, and the color palette was heavily inspired by the Pico-8 fantasy console, developed by Lexaloffle. 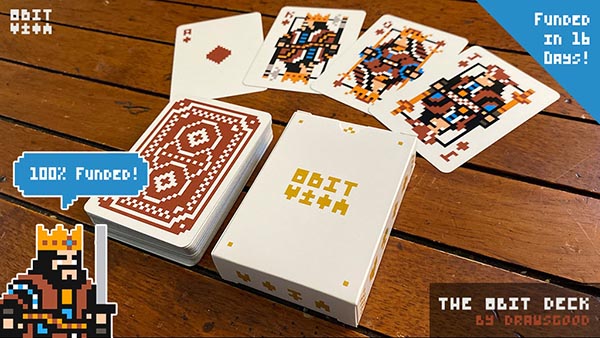 I don't think any other fact will ever beat it. https://t.co/4fhyqgGhVc

Those of us who had low- or no-tech childhoods were endlessly entertained by the classic Etch a Sketch. The one limitation of it, though, was that you couldn’t draw circles or curves (well, you could, but it wasn’t easy). However, via Gizmodo, the Etch a Sketch is celebrating its 60th anniversary this year, and has launched a few limited edition variations, including the Etch a Sketch Revolution:

The Etch a Sketch Revolution is a tad smaller than your typical Etch a Sketch, but it does feature the two signature knobs at the bottom. The main difference is it features a spinning screen that makes drawing circles magnitudes easier. As in, all you have to do is manipulate the knobs on the spinning rim, and that’s it. It’s simple, but pretty neat when you consider just how torturous trying to draw anything circular, rounded, or curvy on a traditional Etch a Sketch is. 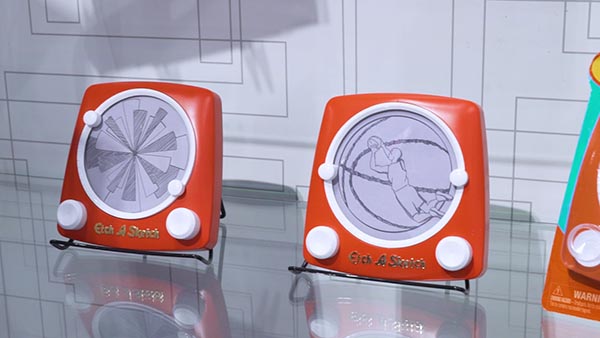 Calm Before the Storm

People said I wasn't qualified to teach an assertiveness training course, but I haven't had any complaints so far.

I wonder what the infinite number of monkeys on typewriters have gotten done during quarantine?

The University of Plymouth tested the claim that monkeys given infinite time would write Shakespeare by placing a typewriter in a macaque enclosure. The monkeys mostly used the keyboard as a lavatory, but you can read what they wrote here: https://t.co/50f1CRIIZv

1527: The first known letter from North America is sent by John Rut while at St. John's, Newfoundland.

1778: The theatre La Scala in Milan is inaugurated with the première of Antonio Salieri’s Europa riconosciuta.

1859: The American Dental Association is founded in Niagara Falls, New York. (Was their theme song “Bridge Over Troubled Water”?)

Pretty impressive for a guy who misplaced his heart in 1962. https://t.co/xDNmIXMWjM

1977: Tandy Corporation announces the TRS-80, one of the world’s first mass-produced personal computers.

1821: The Saturday Evening Post is published for the first time as a weekly newspaper.