No Disk, All Drive: The Press Operator Controller for Harlequin Direct

At the end of April, Global Graphics Software announced its Direct product range, a new class of software that drives data directly to the printhead electronics without any intermediate disk access. There are three products in the range: ScreenPro Direct™, Harlequin Direct™ and Streamline Direct™. The significance of Harlequin Direct for a PDF workflow is that there is no longer a need to RIP ahead.

It’s often been said that you can only really appreciate something when it’s gone, and it’s hard to disagree with that sentiment when we think about how much we’ve had to adapt amid this current pandemic. But, if we consider our digital press workflow, there’s at least one thing we’d reallyappreciate being gone: the disk drive.

Not only does it cause a bottleneck for the ultra-high data rates required to drive tomorrow’s faster, wider, and higher-resolution presses, but its use for storing RIP output before being able to start screening and printing represents something else we’d all rather not be doing unless we absolutely have to: waiting.

With that in mind, I’ll get to the point. At the end of April, Global Graphics Software announced its Direct product range, a new class of software that drives data directly to the printhead electronics without any intermediate disk access. There are three products in the range: ScreenPro Direct™, Harlequin Direct™ and Streamline Direct™.

The significance of Harlequin Direct for a PDF workflow is that there is no longer a need to RIP ahead.  This is achieved through RIPping and screening on the fly within an integrated software pipeline that utilizes Global Graphics Software’s core technologies of Harlequin Host Renderer™ farm RIPs and ScreenPro™ threads in parallel, communicating through shared memory.

Harlequin Direct comes with an optional Press Operator Controller (POC), an example user interface that connects to one or more Harlequin Directs and manages the submission of jobs.  It quickly shows the interactions that are possible with the technology and demonstrates how to control and get status information back from multiple Harlequin Directs.   This article delves a little deeper into the POC that we supply as a pre-built Microsoft Windows version to help get OEMs started, and also with the source code (in C#, WPF, MVVM) so that they can develop their own branded version. The POC can connect to both Windows and Linux versions of Harlequin Direct.

Before the Press Operator Controller can do anything, it needs to know about the press configuration and the Harlequin Directs it will be controlling. 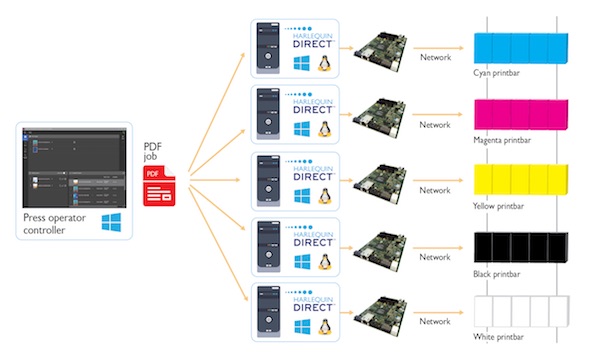 Once the Press Operator Controller knows where each of the Harlequin Directs is running, you can move to defining the Inks.

In the example above, we’re supporting a five-color press with White in addition to Cyan, Magenta, Yellow, and Black. (This move to extended gamut beyond CMYK is one of the reasons the required data rate is increasing and exposing the disk drive bottleneck.)

Each of these inks will have an associated Screen (e.g. 3-drop Mirror) and associated Plane number, which will be allocated to a particular Harlequin Direct instance so that it knows which colors it’s responsible for.

To maximize quality for different media types that respond to specific amounts of ink in different ways (e.g. paper versus non-absorbent and poorly-wetting surfaces such as tin cans and flexible packaging), it is possible to define calibration curves and apply them per ink for that media.

In an ideal world, there would be no queues…for people. But if you’re trying to decide the order of your print jobs then actually queues can be really useful. Here we have a screenshot of the Press Operator Controller showing its three queues. 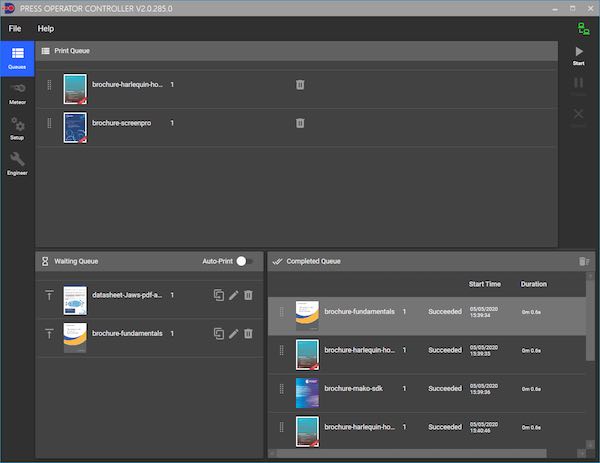 All jobs start off in the Waiting Queue. They can either be dragged into there or will automatically appear there if you have set up an associated “hot folder” that your PDFs will be written to. As you can see from the screenshot, a thumbnail is generated for each and you can choose to print multiple copies. You can also select the page number to start printing from.

Jobs reach the Printing Queue from the Waiting Queue by being dragged there, sent with the press of a button to the left of the thumbnail or automatically if “Auto-Print” has been enabled. No printing will begin until the Start button has been hit on the right-hand-side.

As jobs finish printing, they move into the Completed Queue and can be dragged from there back into the Waiting Queue again if desired.

While going Direct is all about completely ditching the disk from production workflows, the Press Operator Controller will make good use of writing files to disk in a number of situations.

Firstly, before driving output to the press electronics, you might wish to output screened rasters to file to inspect them. This has been especially useful during development of Harlequin Direct as well, to facilitate testing and debugging without connecting to an actual press.

Secondly, if you have a PDF that is particularly challenging to RIP, it may not be possible to feed the screener fast enough to print at the rated speed of your press. To accommodate this, the Press Operator Controller supports a Night Mode for RIPping to contone rasters overnight and an associated Day Mode to screen those rasters directly to the press when an operator can be present.

Finally, detailed log files are created during running, which could be invaluable if there was ever a complete loss of power or some other system error that needs investigating.

Originally conceived as a way to help OEMs get started with controlling Harlequin Direct rather than simply sharing the Harlequin Direct API to call into, hopefully it’s clear even from this brief tour that the Press Operator Controller has evolved beyond that to support a full, albeit simple, workflow.

This evolution is set to continue in future, with the option to choose different resolutions and drop counts per color as well as support for duplex printing like in the diagram below. 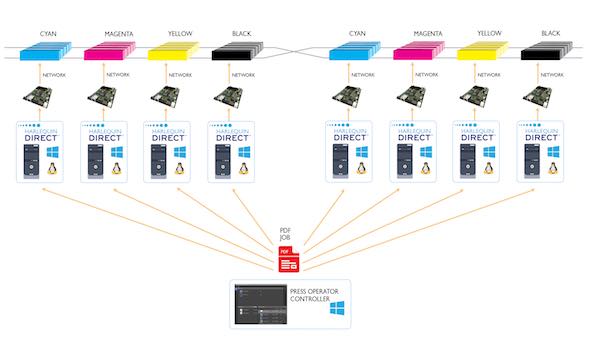 Aside from development by Global Graphics Software there’s also the possibility for OEMs to add new features themselves (as well as their own branding), using the C# source code supplied alongside the Microsoft Windows executable for the Press Operator Controller. 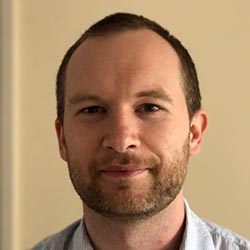 If you would like to learn more about Direct, please visit www.globalgraphics.com/direct.

Ian has over 15 years' experience in industry as a software engineer focusing on high performance. With a passion for problem-solving, Ian's role as product manager for the Direct range gives him the opportunity to work with printer OEMs and break down any new technology barriers that may be preventing them from reaching their digital printer’s full potential. He can be reached at: [email protected].