It’s been almost two years since we wrote about the work that Advanced Functional Fabrics of America (AFFOA) is doing to develop functional fiber computing solutions that will likely be the basis for moving us into Industry 5.0. Seems like we don’t even have Industry 4.0 under our belts, but technology does move fast these days! We spoke with the AFFOA team, including CEO Alexander (Sasha) Stolyarov, Chief Marketing Officer Eric Spackey, Senior Director of Business Development Natasha Spackey, and Chief Technology Officer Jason Cox, to get an update on what has transpired in the past two years. 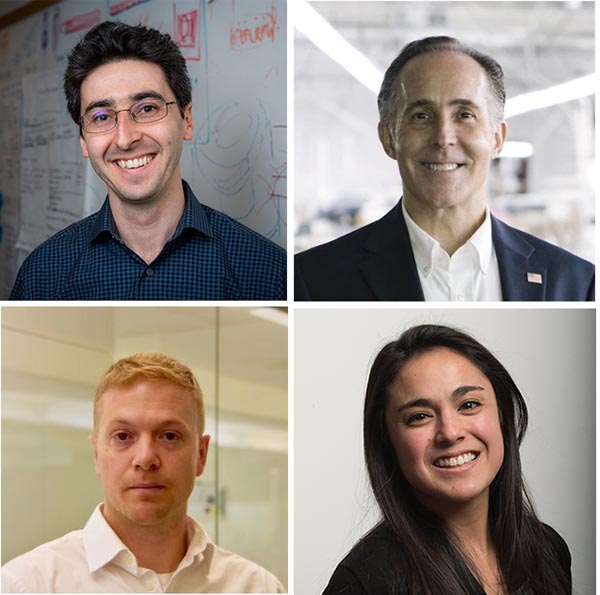 When you speak to Eric Spackey, Chief Marketing Officer at Advanced Functional Fabrics of America (AFFOA), he likes to hearken back to his days in the telecom industry to draw parallels between how the smartphone became ubiquitous and what needs to happen for fiber computing solutions to do the same. Spackey and I have both been around long enough to have owned a “bag phone”—an early mobile phone that was really a brick weighing several pounds that you could take with you in the car. Mine was a Motorola! 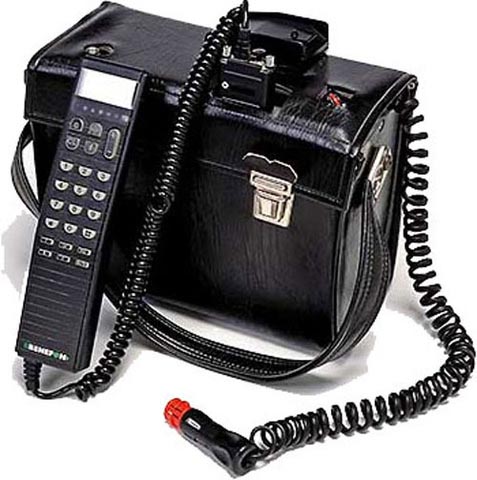 His point is that carrying that heavy thing around was not that comfortable, and it had a limited feature set, as did cellphones over the next couple of decades. It wasn’t until 3G networks with digital data capability began to be available, and then Apple integrated the iPod with a phone, calendar, and other capabilities in 2007, that the adoption chart went vertical.

He notes that fiber computing faces some of the same barriers. AFFOA has proven that a variety of non-polymeric functional materials can be integrated into fibers, enabling us to think about the functionality of fibers and fabrics in ways we couldn’t before. CEO Alexander (Sasha) Stolyarov reports that the functionality includes things like physiological monitoring of body temperature, heart rate, blood oxygen level, respiratory rate, and more, as well as monitoring things like contaminants in the environment that might be harmful. Stolyarov sees a not-too-distant future when technologies will be able to add computation and algorithms that add actionable data to the sensing and communications capabilities they have proven in the lab today. Both explain, however, that one of the biggest barriers today is availability of a power source that is not bulky and uncomfortable. Spackey comments, “What I think we will see in the next five to seven years are significant breakthroughs where there will be applications processed off the fabric as opposed to having a watch or device connected to the garment, such as a puck that carries the radio information or a battery pack as a power source; no one wants a puck or battery pack attached to an undergarment. When we look back, we will laugh at the early wearables attempts, and even the need to use a watch or phone, in much the same way we look back now and laugh at those bag phones. We’ve been able to show in the lab that we can process information at the fiber level, but how to you make it robust enough to actually have consumers make use it still remains to be determined.”

The other barrier is what lack of we used to call the “killer application”—dating myself again! Spackey adds, “It is not a question of if, but when, fiber computing will mature to the point your fabric can be connected. The big question is why you would want to connect it.” Natasha Spackey adds, “Need is an inhibiting factor, as well as comfort level. Many solutions are still relatively big and bulky. We need to address size, weight, comfort, ease of use, and power consumption barriers to see an exponential growth curve. But the real challenge in the near term is finding that compelling use case that is important enough that people will put a bit of that comfort aside to use it.”

Both draw the analogy back to the iPhone which is not just a phone that helps you communicate, but just about everything you want is now on that phone; it’s connected, and it does multiple things. They project that the near-term use cases, the most compelling reasons to computer on the body, that will drive adoption of fiber computing, are likely to come from the healthcare space. Natasha adds, “Healthcare has more money to invest in R&D than the apparel industry, and it’s the space where there is most likely to be a real need and a use case that will drive creation of these applications—real need rather than nice to have.”

Even there, comfort and convenience will come into play. Natasha says, “HealthWatch made the first FDA-approved EKG shirt a decade ago. If you have ever had to put a halter monitor on, it is not pleasant. Wires all over you and a big box you have to carry around. The shirt worked the same as a halter monitor. Now it’s 10 years later, and we wonder why that didn’t take off; it seemed to be a no-brainer. The idea was right, but the technology wasn’t where it needed to be. Comfort was part of it. Also, the shirt needs to be tight-fitting, but how do you efficiently factor in sizes and body shape profiles into the manufacturing process? To make it a universal product, you have to engineer it differently.” Note the hardened “puck” on the side of the shirt in the image below. 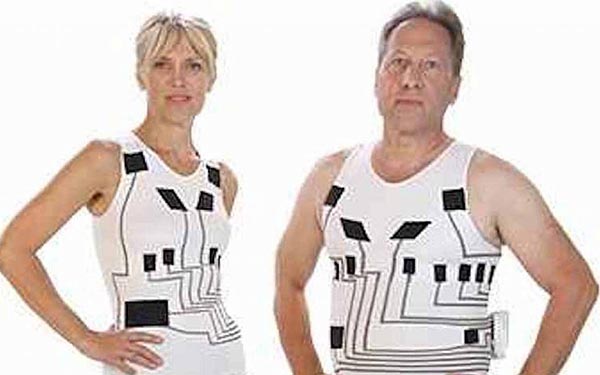 Image Source: The Times of Israel

In addition to personal health monitoring, AFFOA sees opportunity in the monitoring of structural health for items such as bridges. “There’s an enormous opportunity to add computing and sensing capabilities to textile applications outside of apparel,” Natasha adds.

One of the biggest advances AFFOA has seen in this regard is the integration of semiconductor materials (chips) in the form of sensors, microphones, actuators, etc., into fibers, allowing more sophisticated functionality to be considered. “Envision a not-so-distant future where the phone in your pocket starts to disappear into the fabric you wear,” said Chief Technology Officer Jason Cox. “The average person wears 10 square meters of fabric. It opens up the opportunity to have a ubiquitous interface on your body at all times with a connection between the body and the outside world. But rather than bolting circuit components onto clothing or printing things, AFFOA thinks the only way we will get wide-scale consumer adoption is by making the capabilities disappear into the very fibers that the fabrics are created from.”

Another aspect to consider is the ability to display the results of the computing and algorithms. “Another element we have been working on is developing fibers that can change their color with low power,” Stolyarov says. “In addition, we are working on incorporating LEDs into fabrics to create displays. LEDs are used in computers, televisions, etc., to display information today.”

An important element of AFFOA’s mission that should not be overlooked in this discussion is the revitalization of domestic manufacturing for the textiles industry that has left the States for lower cost labor outside. Stolyarov points out, “The recent crisis highlights the fragmentation of the textile industry supply chains. Our mission is to revitalize the industry in new ways; to do that, we need to make it a high-tech industry with technical fabrics and not just the fabrics of the past. We also need advanced manufacturing approaches and robotic assembly. We believe it will take these advances in technology and assembly know-how to begin reshoring textiles in a meaningful way.” 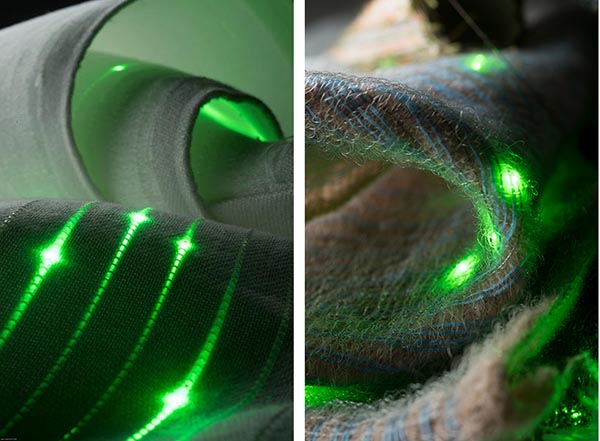 Today, there is a tremendous amount of work being done around the process associated with fiber computing, but no one has yet put it all together as a complete system, nor have adequate automated manufacturing technologies been implemented. Eric Spackey concludes, “Fiber computing and the revitalization of the American textiles manufacturing industry requires a complete system, not just creating a button that can be a switch, but also where the information goes, who gets it, what is done with it, and how products are efficiently manufactured. When you buy an iPhone, you don’t just buy the camera; you pay for the network that has required investments of hundreds of billions of dollars, the advances in touch screens, the increased efficiencies that have been developed for manufacturing them, and all of the other capabilities that go into the device. These are things you never see; they are in the background. You just want to turn it on and have it work. The same will happen with fiber or fabric computing. It’s evolving rapidly and you will see it come to fruition in our lifetime!” 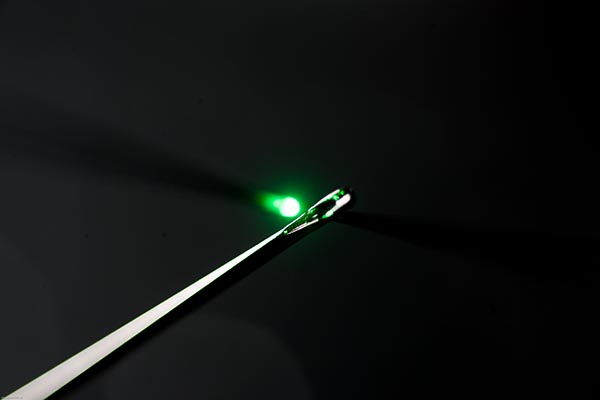 Threading the Needle: Tiny LEDs small enough to be threaded through a needle offer many opportunities for fiber computing display capabilities. Image compliments of AFFOA.