The Lull Before the Tempest—March 2020 M&A Activity

Transactions continue apace up to mid-March, then abruptly stop. What’s next, and more… 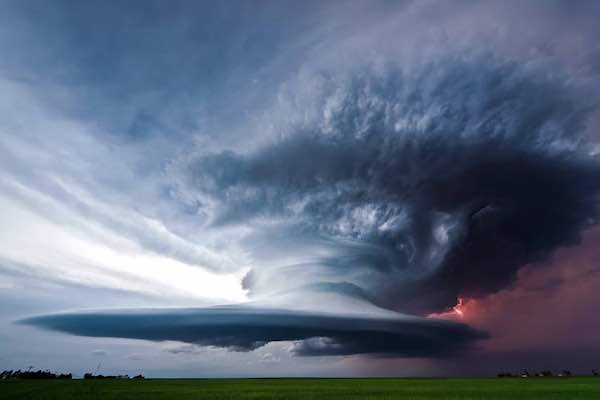 Let me say it right up front—it’s difficult to write a relevant, fact-based commentary about M&A transactions in the printing and related industries when the world has literally stopped in its tracks to deal with the life and death issues caused by the spread of the coronavirus. We are all just starting to understand the impact on the overall economy and implications for specific sectors. Within the context of understanding that you may have more important things on your mind right now, I’ll stick to my knitting and try to make some sense of where M&A activity is headed in our industry. As readers of The Target Report know, our monthly commentary is a gestalt of the prior month’s transactional activity, an analysis of trends based on that activity, and modest suggestions of what we believe those trends tell us about the future of the printing and related businesses. However, given the seismic nature of the current crisis, the rear view mirror is less useful, so we’ll depart from our usual style this month, look backwards just a bit, and offer our view through the front windshield.

Transactional activity came to a screeching halt in the middle of March. With only two exceptions (the approval of Case Paper’s asset purchase in a 363 sale in a bankruptcy proceeding, and a sale of International Paper’s containerboard mills and converting facilities in Brazil), no new transactions were announced after March 13in the segments we are concerned with. Not coincidentally, the day before the “music stopped,” the stock market had its biggest fall since 1987, followed by another record decline the next Monday. The storm clouds were clearly gathering before that, but due to the momentum and time frames that occur in most M&A transactions, activity during the beginning of March was reasonably normal; the deals that did close were already well on the way to completion as the virus began its spread out of China and across the globe. That momentum has now all but ceased and we have entered a very quiet period for transactional activity. The quiet will not last.

Regardless of how the medical and economic impact of the coronavirus plays out, there is a disruptive storm on the horizon. Transactional activity will likely not return to pre-COVID-19 levels for quite a while. Based on our research, and what we see over the past month here at Graphic Arts Advisors (GAA), it's our view that the COVID-19 pandemic has created a sudden and dramatic shift in the landscape for M&A transactions in our industry. Several transactions that we were working on between financially healthy buyers and sellers that were scheduled for closing in March and April have been put on indefinite hold, at least until the owners see a path back to some level of normalcy. At the same time, clients that were financially challenged before the virus hit have accelerated the sale process and/or have begun seeking alternatives to stem the losses that are sure to come. These trends, pausing healthy transactions and speeding up resolution of difficult situations, will continue, at least in the near future, and possibly longer.

Bankruptcy filings have not yet shown a significant uptick. We found four Chapter 7 filings in the industry in March, which is only slightly more than the average over the past several months. Three of the companies that filed for liquidation were publishers: a newspaper in Shreveport, La., a specialty magazine publisher in Pittsburgh, and a book publishing company in San Antonio, Tex. (The fourth was an online platform aimed at commercial printing companies, seeking to provide a source for apparel and promotional printing.) These bankruptcy filings were probably all in the works before the coronavirus was a full-blown crisis. The slight increase in Chapter 7 filings is likely only a precursor to a more significant uptick in companies seeking a court-supervised liquidation process.

Interestingly, there were no new Chapter 11 filings of companies in the industry seeking to restructure and/or sell assets under the supervision of the Bankruptcy Court. This will change. As reported in Bloomberg, LSC Communications has been preparing for a Chapter 11 bankruptcy filing. The company’s stock has fallen to less than one tenth of one percent of its high since being spun out of R.R. Donnelley in 2016, and the company’s debt is trading in distressed debt markets at a deep discount to face value. When LSC files, there very well could be a ripple effect to its suppliers, many of which will be too small to go through the difficult and expensive Chapter 11 reorganization process.

There was only one non-bankruptcy plant closure in March. CJK Group, the national consolidator of printing companies, many of which were financially challenged when acquired by CJK, announced the shutdown of Sinclair Printing, its Los Angeles commercial and book printing facility. In the announcement about the closing, CJK specifically named the COVID-19 pandemic as a major factor in its decision to consolidate the Los Angeles production into its other facilities, deferring the decision as to whether the shutdown is permanent.

Other non-bankruptcy plant closures are already in the planning stages. While not being specific yet with how many plants are ceasing operations, Quad/Graphics has indicated that employees are being furloughed and operations will be shut down at several manufacturing sites. In addition, Quad has cut executive salaries, delayed capital projects, suspended the dividend, and drawn down under its credit facility to increase cash on hand. Quad has stated that the closures are temporary. Companies without the resources of a Quad may have to make more permanent decisions to close down operations via non-bankruptcy wind-downs and liquidations.

What we Expect at GAA

Transactions “between equals” will go quiet until some level of normalcy returns to the market. Some transactions will be put on hold, while others will be broken off completely. Owners of successful companies who were ready to exit will not want to sell into a downward trending market. Successful companies that were active acquirers will not want to pay prices based on out-of-date market multiples. The market stasis is over. The even playing field between buyers and sellers that has existed for the past several years will tilt in favor of buyers. Companies with strong balance sheets or well-funded financial backers will be in especially strong positions to negotiate favorable pricing and terms.

Valuation multiples will trend downward, especially in the weaker segments such as commercial printing and publishing (those that rely primarily on printed vehicles to deliver their content). As noted in previous Target Reports, the market had already softened a bit for wide format printers that cater to the retail market. The mass closures in retail will certainly impact those companies focused on retail onsite signage, point-of-purchase, as well those catering to events with signage and banners.

It’s too soon to tell if the public will develop a long-lasting aversion to touching mail and what will be the impact on direct mail companies. However, in the meantime, the USPS expects a rapid drop in mail volumes (while also reporting that deliveries of packages from online purchases has increased). Articles are already starting to appear in the trade press about a dramatic decline in advertising revenues, especially impacting local papers and magazines, and further accelerating the transition to digital channels and online shopping. It remains to be seen if these changes will be permanent.

Manufacturers of folding cartons, label printers, and flexible packaging companies will likely see less decline in valuations, but the heady days of the past several years with some companies reaching double-digit valuation multiples may be a thing of the past as everybody recalibrates. Unlike some segments that may not recover fully, packaging will rebound and track the overall economy. As noted last month, activity in the corrugated box segment has remained strong and we expect that to continue due to increased online shopping (see The Target Report: Catching the Wave in Corrugated Cartons, February 2020).

Buyers with solid balance sheets will get excited about the return to a strong buyer’s market and will seek out tuck-in opportunities. At GAA, we are already receiving calls and emails from owners of companies who perceive that conditions have changed to a more favorable market for acquisition and consolidation. Buyers eager to take advantage of the situation are making their position known.

Owners of distressed companies will imagine that getting together with another distressed company will solve their problems. In a last-ditch effort to maintain an equity interest in their enterprise, some owners will try to “tie two stones together in an attempt to float.” Owners of companies that were already “treading water,” but not necessarily fully distressed, will put off any decisions until they exhaust the monies from recently passed Federal aid. Many will then begin to fail anyway and need to do something.

Secured lenders will be patient while the Federal monies pour out, but will slowly begin to push their most troubled debtors into workout. Portfolio managers at traditional banks and other cash flow lenders may be encouraged by their senior executives, credit managers and corporate strategists to push printing companies out of their portfolios (it won’t be the first time). Trade creditors will not want to kill their customers with excessive credit restraint but will likely watch their credit exposures closely and selectively exert pressure on their weakest customers.

While we are confident that the storm ahead will pass, it remains to be seen if we are in for a full hurricane season, or simply a passing summer storm with another clear patch on the other side. In any event, the windshield is already a bit blurry, so be prepared to turn the wipers up to full speed. 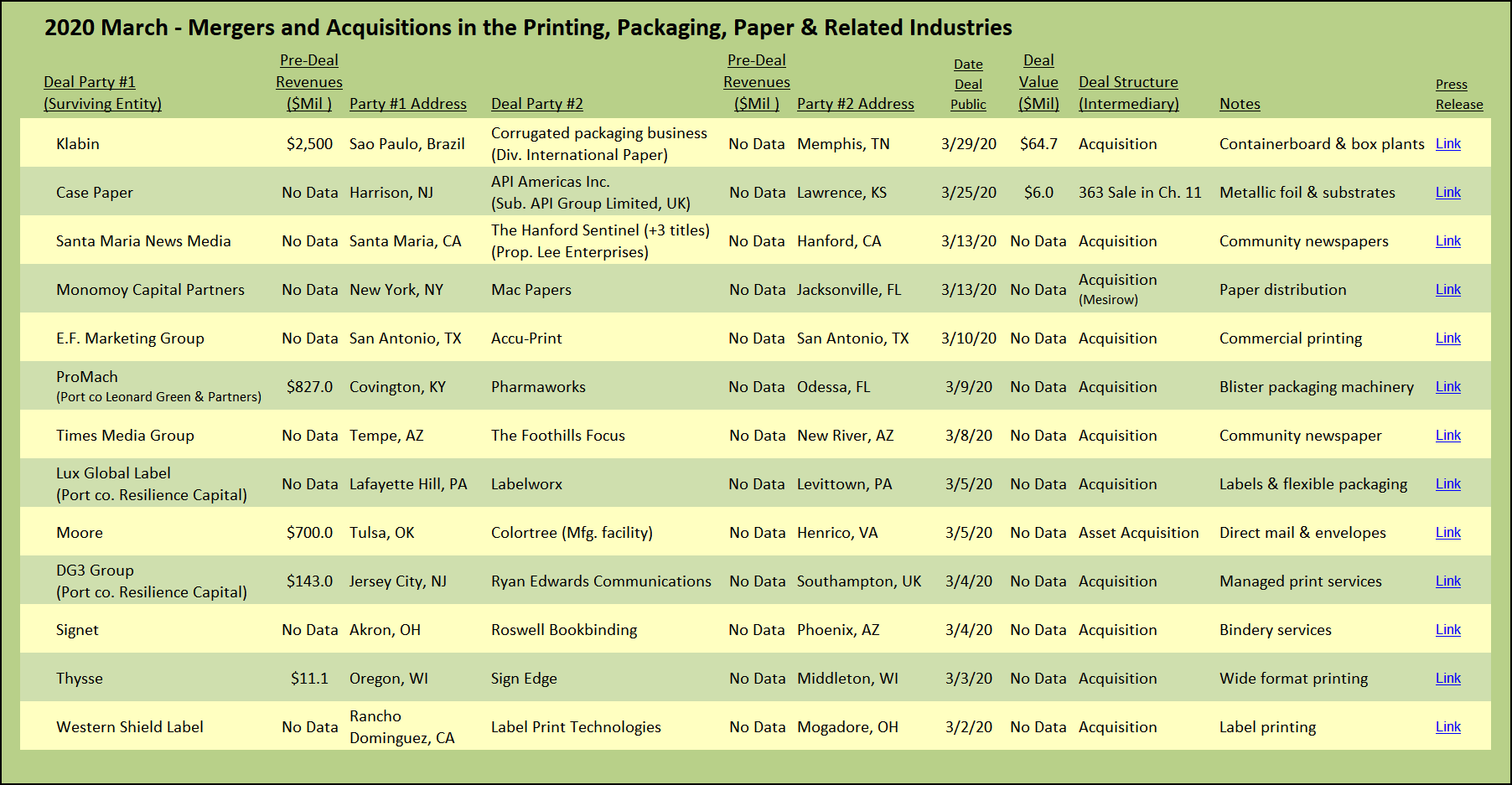