Sicily has figured out this whole self-isolation thing.#COVID19 #CoronavirusPandemic pic.twitter.com/93whPVtQcR

At a recent industry event (one of the last before they started getting cancelled), one of the interesting phenomena we experienced was the range of creative ways to avoid handshaking. Many of us preferred the fist bump—elegant, classic, unobtrusive—but the elbow tap was also a popular alternative. Still, the kinks do need to be worked out, as it was a bit of a faux pasto go for a fist bump while the other person was going for the elbow tap.

Still, Core77 offers a variety of other alternatives that don’t involve any physical contact whatsoever—and can be done from a safe six-foot distance if need be, such as the Namaste, the Bow, the Magician (!), etc. We are partial to the Isaac. 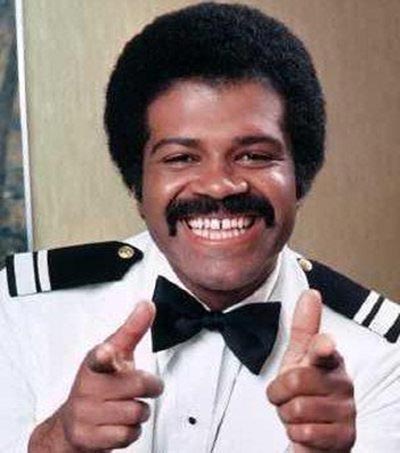 Been homeschooling a 6-year old and 8-year old for one hour and 11 minutes. Teachers deserve to make a billion dollars a year. Or a week.

Parents, teachers do this every day with jam packed classrooms, not just a couple of kids. Remember this week next time teachers ask for resources & pay commensurate with their expertise & effort.

Early in the COVID-19 crisis, Des Plaines, Ill.’s Beacon Tap had a unique promotion to lure leery customers: a free roll of toilet paper with each takeout or delivery order. “[General Manager Tommy] Riemer said, ‘I immediately made a phone call to Trimark (which supplies toilet paper to the Beacon Tap) ... and ordered as much as I could so we could offer it to customers as a little comic relief.’ Riemer ordered 300 rolls. He said the response from customers has been ‘amazing’ and he has already given out 80 rolls.”

To be honest, we have been to some restaurants that should do this as a matter of course.

While some of us were into social distancing before it became cool, in the current crisis, it is a recommended strategy to help reduce the spread of COVID-19. Still, sometimes people need to be...encouraged to keep their distance, so Core77 has issued a call for designs for a “social distancing enforcement object.” This large wearable disk is one idea: 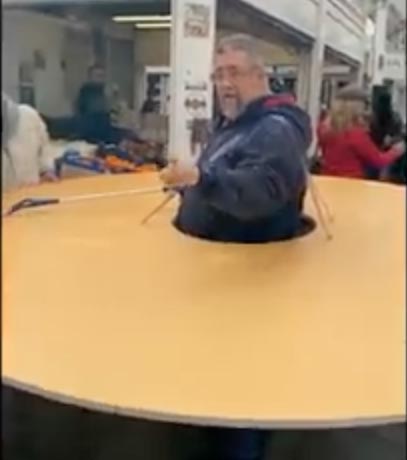 Not a good idea, but an idea. We’d pay good money to see him try to get through a door or navigate through a store (Glass Ornament Emporium should lock its doors if they see him coming). If you’re going to go to that much trouble, maybe it would be better to just stay home.

If the run on lavatory paper persists and the paper industry can’t keep up with demand (even the AF&PA felt it should comment on the situation), be happy that spring is coming: Core77 gets to the bottom of things and provides a handy field guide to plant leaves that would suffice should the need arise—as well as some helpful tips on what to avoid:

- Anything waxy (smears rather than absorbs)

- Leaves growing in alternating, as opposed to mirroring, positions on the branch (might be poisonous)

Resistance Isn’t Quite So Futile

OMG who made this? ???? pic.twitter.com/3LKnXAOZl3

Not Just Toys In the Attic

Gage & Tollner was a famous upscale Brooklyn restaurant that dated from the 19th century. Over the years, it has hosted celebrities, and especially New York sports figures. It closed in 2004 and since then its old Fulton Street location served variously as a costume jewelry store, a tattoo parlor, and an Arby’s. Now, the old steak-and-seafood restaurant is in the process of being revived and hopefully restored to its old glory, and during some renovation, the new owners found a trove of historical artifacts whilst cleaning out an old crawlspace. From the New York Times:

cryptic handwritten notes about turn-of-the-20th-century cash transactions; menus; price quotes from a butcher; notes on celebrity customers and the prodigious speed of an oyster shucker; correspondence about a restaurant display at the 1939-40 World’s Fair; fliers from a 1948 strike; a 1965 WQXR radio advertisement recording; and a bill from a dinner for retired Brooklyn Dodgers players.

Among the first items pulled from the newly discovered boxes were award certificates from Holiday magazine, a national travel publication that honored Gage & Tollner for 24 straight years beginning in 1952. In an era before the James Beard Awards or Zagat’s or Yelp, the Holiday awards were so coveted that the longtime owner Ed Dewey collected all kinds of ephemera from the galas, including invitations, menus, matchbooks, train tickets and pictures of him and his wife, Trudy, with other winners.

Some of diaries and other records provide a detailed look at the restaurant business—and race relations—in the late 19th and early 20th centuries.

Well, this would be embarrassing: “Miley from Vancouver, Washington thought she was doing her bit to stop the spread of coronavirus by thoroughly washing her hands with a bar of soap. Unfortunately, she instead succeeded in spreading some rather mature looking cheddar on her hands over the course of several days. Sharing her sorry tale on Reddit, Miley explained how the cheese ended up being mistaken for a bit of soap after it was left out of the fridge following a drunken late night snack.”

Don’t even ask about the Miracle Whip hand sanitizer.

This inspires me. I also will write King Lear. https://t.co/tUytqNjo0a

As you finish out a week of self-quarantining and dread the thought of another, here’s one way to help alleviate the boredom: you can check ebooks out of your public library remotely. And, even better, in lieu of the current crisis, book publisher Macmillan has decided to cancel its horrible plan to deny ebook licensing to libraries (at least for now). From Gizmodo:

Macmillan enacted the embargo last fall, claiming that the free availability of its ebooks at public libraries cannibalized its book sales. Librarians were, unsurprisingly, not happy about the move, which was instituted on top of the already-onerous fees and licensing terms that libraries have to agree to in order to offer ebooks. Macmillan was the only publisher to embargo new releases.

Library users still tend to prefer print books (or audio books), but as libraries are shutting their doors in the wake of the current crisis, ebooks remain the only viable material that can be circulated (unless your library makes streaming movies available via Kanopy), for those who suffer from abibliophobia.

The word of the day is... (via tumblr) pic.twitter.com/Uy0Jul0VIC

Maybe It Was Just an Excitable Boy

Interesting headline from LiveScience (and elsewhere): “Ice age 'house' made from bones of more than 60 mammoths mystifies archaeologists.” And not just mammoths: reindeer, horses, bears, wolves, red foxes, and Arctic foxes. They were thorough, whoever they were. Researchers have no idea what this structure was used for; they ruled out use as a dwelling, and there is no evidence that there was anyway to put a roof on it. It is a puzzlement.

Authorities were forced to cordon off New Rochelle because when it comes to the the coronavirus, the place is a veritable Petrie dish. pic.twitter.com/j6Rso9NJRy

We don’t know when we’ll be flying again, but we rather like this idea: removable faux stained glass aircraft window clings: 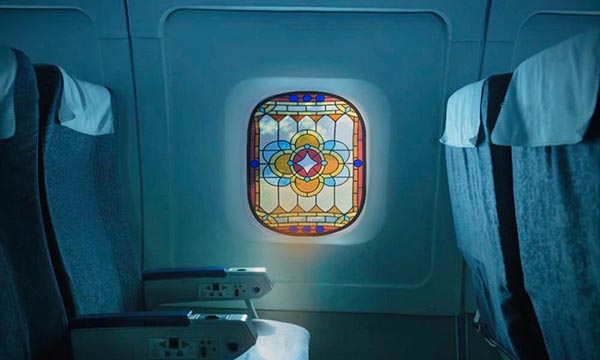 Now Southwest’s “C” boarding group can stand for “cathedral.” “It also protects against any germs that might be on windows! It's infinitely washable with soap and water or can be sprayed with disinfectant.” It even comes in different sizes for different aircraft. Available here. Aisle-wide tabernacle sold separately.

As gyms and salons close across the city, Los Angeles residents are gripped for a dramatic reduction in hotness

Since the advent of the iPad and LCD-based tablets, the E Ink electrophoretic ereader technology kind of lost a bit of its appeal, although now that E Ink has a color version, it is back in the spotlight and is even finding applications in digital signage. And, via the Verge, even the latest black-and-white E Ink tablet might be a hit:

where the reMarkable 2 stands out is the “paper-like” design, a mixture of the textured writing surface and the custom material used for the stylus tips that makes it feel like an actual pencil. The Canvas display has a few new things, though: a shorter distance from the cover to the actual E Ink underneath and a far-faster 21ms latency (nearly twice as fast as the older model). The new model also switches over to USB-C for charging, which is a welcome thing to see in 2020. 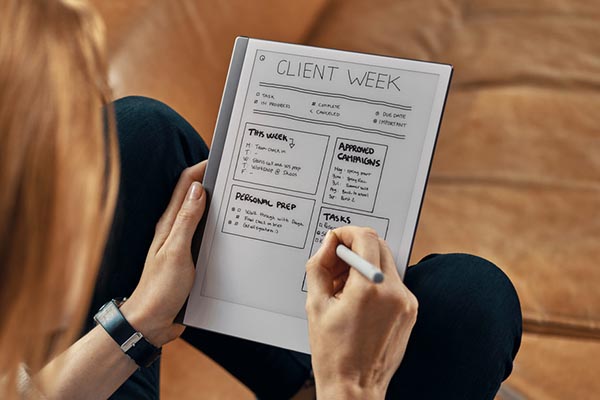 Other Advice Is Available

I told myself I really ought to stop drinking. But why should I listen to a drunk who talks to herself?

We have heard of underground bands, but didn’t know you could set a Guinness World Record for “deepest concert.” And yet, via Huffington post, that is what Sudbury, Ont., band the Shaft Bottom Boys did, having played a 50-minute gig 6,213 feet below sea level in Creighton Mine. With perhaps some sense of irony, “Vocalist Steve Atkins says the whole performance was a high point in his life.”

?? It was an itsy bitsy teenie weenie ?? pic.twitter.com/ONhso41kQI

Still a thing of great beauty all these years later..

1973: The Pulitzer Prize-winning photograph Burst of Joy is taken, depicting a former prisoner of war being reunited with his family, which came to symbolize the end of United States involvement in the Vietnam War.

1931: Gambling is legalized in Nevada.

1828: Norwegian poet, playwright, and director Henrik Ibsen born (not in a doll’s house).