The View from the Other Side: Print Buyers’ Revenues

Publishing and advertising are among the biggest print-buying markets. Last month, the Census Bureau released its Quarterly Services Survey, which reported revenues for these markets. Publishers’ revenues continue their long decline, while the up-and-down of advertising revenues indicate the extent to which the nature of advertising is changing. 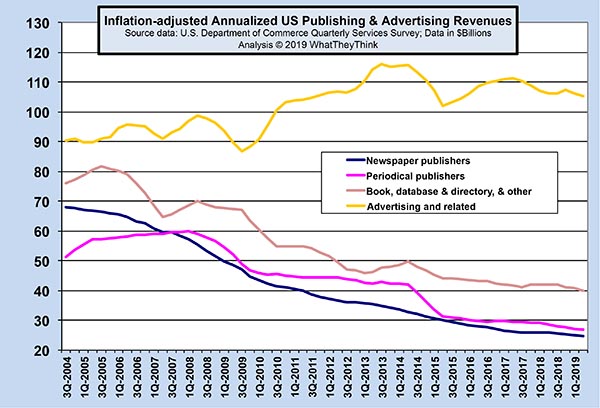 Last month saw the Census Bureau’s release of the Quarterly Services Survey, which includes some of the biggest print-buying markets, such as publishing and advertising.

On an annualized basis, since 2004, newspaper publishing revenues have dropped by about $43 billion, although for the past three years the drop in revenues hasn’t been quite as steep as earlier in the decade—or in the previous decade. Periodical and book publishers are in only slightly better shape.

Advertising revenues have been up and down, which is reflective of the fact that the nature of “advertising” is changing. It used to be easy to spot the ad: a page in a newspaper or magazine, a radio or TV commercial, etc. But over the period encompassed by this chart, we’ve seen not just a shift to non-print forms of advertising, but other kinds of marketing initiatives than what we usually think of as “advertising.” Think of content marketing (white papers and sponsored “advertorial”), e-newsletters, mobile apps, and other kinds of initiatives. With this kind of “advertising,” more work is done internally or by freelancers rather than by agencies, and offer much more bang for much less buck. There is also a greater reliance on social media, which is largely the purview of PR agencies/reps (hence the reason that PR employment tends to be consistently higher than other creative markets) or even internal social media managers.

We focus here on print, but when we talk about advertising, we also have to include TV and cable; terrestrial TV audiences are shrinking, people are increasingly cutting the cord, and streaming is the “new cable”—and largely advertising-free. (People happily pay an extra $5–6 for Hulu’s commercial-free service, for example, and Netflix is ad-free, as well.) And pre-roll ads on YouTube rarely survive Skip Ad.