Printing Industry Profits: What Goes Up...

Industry profits data came out earlier this month, and overall profits slipped a little. Annualized profits for Q1 2019 were $3.58 billion, down slightly from $3.66 billion in Q4 of last year. Again, it’s the large printers that are dragging down overall industry profitability. 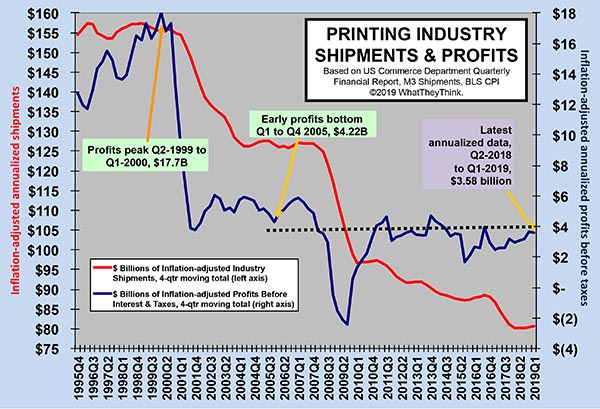 Industry profits data came out earlier this month, and annualized profits for Q1 of this year were down very slightly from $3.66 billion to $3.58 billion. We’re just never going to cross that $4 billion threshold....

In Q1, for the industry on average, profits before taxes were 2.98% of revenues, and for the last six quarters, they’ve averaged 3.83% of revenues.

Looking at large vs. small printers is always unpredictable. Back in March, when we looked at the Q4 2018 profits report, we noted that large printers’ profits before taxes were 4.76% of revenues, while for smaller printers, they were 4.11% of revenues. We remarked that the gap between the “two cities” was closing, considering how wide it had been earlier in 2018.

If we’re wondering why that $4 billion barrier seems so unattainable, this is a good part of the reason.