Printing Shipments as a Percentage of GDP

Since 1997, the value of printing shipments went from around 0.75% of GDP all the way down to about 0.35%. So we should not be surprised that parts of the printing industry are falling off the government’s radar. 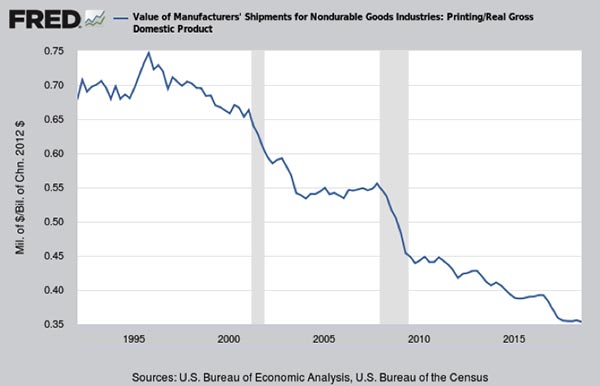 Last week in our look at book printing employees, we commented on the brouhaha over the Bureau of Labor Statistics (and other government agencies) consolidating printing industry business categories, and we made the comment “these agencies have always focused on large industries with large enterprises, and...industries dominated by small establishments—like print—have never received detailed attention, especiallynow that traditional print categories are such a small part of overall GDP unlike three decades ago (emphasis added).

This week, we were working on our 2019 Printing Industry Overview report, and as we were going through various government data series, one stood out as relevant to our previous comment: printing shipments as a percentage of GDP.

Since 1997, the value of printing shipments went from around 0.75% of GDP all the way down to about 0.35%. After the recovery in July 2009, things looked like they were evening out, but they just kept going down.

Essentially, this is the story of technology. Printing shipments as a percentage of GDP started to plummet when the Internet truly “arrived” circa 1996 and while we can blame the recession for some of the drop after 2008, remember also that this was also the period that saw the advent of social media, the smartphone, and mobile media.

Every new electronic medium has disrupted print’s standing in the overall scheme of media, so we should not be surprised if the government doesn’t give the printing industry the love we may think it deserves.