Q4-2017 GDP estimates were raised to +2.9% from the original estimate of +2.5%. (But beware inventories.) At the same time, shenanigans resulting from the latest tax bill are blurring statistics visibility, especially where corporate profits are concerned. 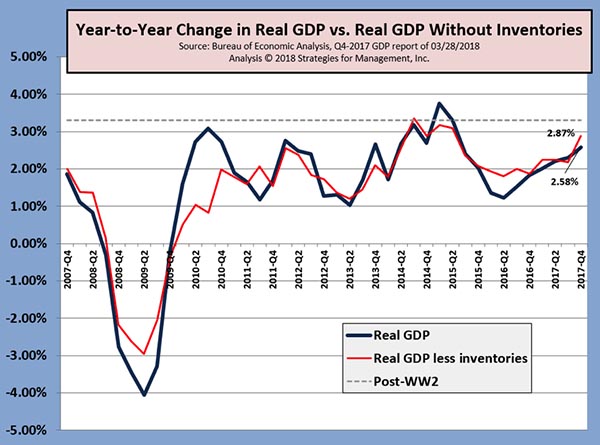 Because of the volatility of economic data, compounded by the effect that inventories have on GDP reporting, it is often helpful to look at GDP data with and without inventories. The chart presents the data on a year-to-year basis in that manner. Inventories played a big role in the latest GDP revision: GDP was raised by +$13.6 billion, but inventories were raised +$6.6 billion, almost half of the GDP change.

More interesting, however, is the effect of tax changes on corporations. The higher 2017 rates meant that it was worthwhile to book as many expenses as possible in the 2017 tax year and deferring revenues to the 2018 tax year. The press release about corporate profits was strong indication that this happened.

It said “Profits from current production...decreased $1.1 billion in the fourth quarter, in contrast to an increase of $90.2 billion in the third quarter.” How can there be that big a swing when all the other indicators are showing at worst a flat economy, while data such as employment are showing a rise? Cash-basis small businesses likely played the same shell game.

These effects of tax behavior must be driving the analysts and their quantitative models crazy This means there is blurry statistical visibility. This means that the experience and judgment of analysts is more important than usual as all of the tax adjustment shenanigans play themselves out in the next couple of quarters. As discussed in the latest economic webinar, government estimating models and the forecasting models used by econometricians may not properly handle tax change effects.