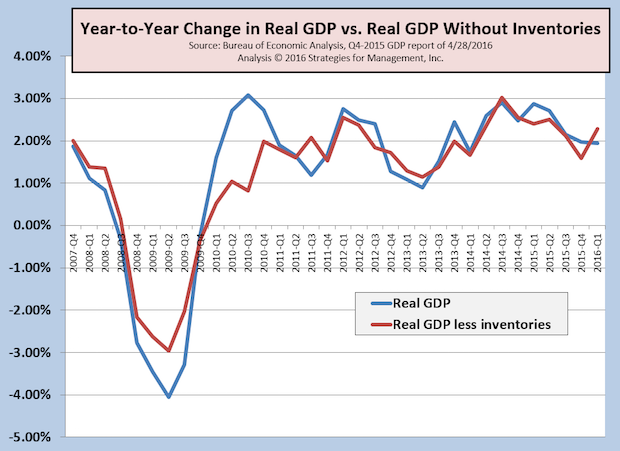 The bad Q1 has been unfolding for quite a while, and as expected, the news led analysts to believe that the Federal Reserve would continue to delay its plans for interest rate increases.

It is possible that half of the quarter was spent in recession that has already been recovered when there were serious global economic concerns with severe drops in commodity prices. Most commodity prices have rebounded from those lows. Central banks also took actions, including negative interest rates, to soften the impacts. By doing so, they guarantee a continuing sluggish economic picture that has economies barely above recession levels.

Some economic pundits have been concerned about decreases in corporate profits over the last year. We have mentioned often that many key indicators have been slowing down or negative, such as factory orders and durable goods, for about 14-18 months. The most recent peak of the economy was in late 2014. If a recession is declared, the experts may choose a date in that time period as its start.

MarketWatch reported that “business slashed investment by the steepest rate since the Great Recession... Inflation as measured by the Federal Reserve’s preferred PCE index rose at a scant 0.3% annual rate in the first quarter... But the core rate that excludes food and energy climbed at 2.1% pace, up from 1.3% in the prior quarter. That could move the Fed closer to its next interest-rate hike later in the year.”

While the inflation measures that the Fed watches may be rising, it is likely that they will be dismissed as recoveries from the commodities collapse, and their worries about underlying economic growth, which appears fragile to them, will keep them from taking any aggressive action.

The economy remains sluggish, and we expect growth to be in the +1.75% to +2.25% for this year, with possibilities of recession higher than usual.