Are the recovery indicators becoming recession indicators There's enough negative news of late to be wary about the state of the economy, and a lengthening list of geopolitical issues, for sure. 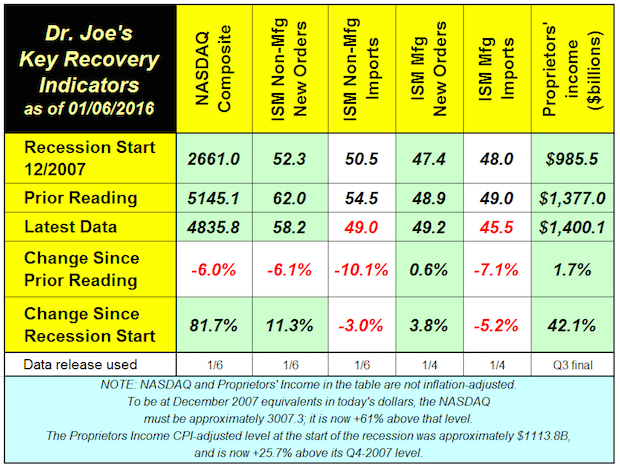 There's enough negative news of late to be wary about the state of the economy, and a lengthening list of geopolitical issues, for sure.

Most economic measures are results of the dynamic action of opposite interests. Oil prices are down, and that's great for consumers. Those low prices are creating a worry about a brewing currency crisis as emerging market oil economies may not have enough revenues able to pay their dollar-denominated debts. That's an opportunity to creating even more monetary mayhem than we're used to.

The NASDAQ, like other stock markets, has taken a beating in the first trading days of 2016. Originally explained as early tax-selling, it seems to be more than that. It didn't help that news about Apple indicated a reduction in expected iPhone sales and continued concern about China's economic slowdown. US factory orders have had negative comparisions with the prior year for 13 consecutive months.

Four of the six recovery indicators turned negative compared to last month, with two of them are now below levels when the last recession began eight years ago.

As of this writing, the Atlanta Fed's estimate for fourth quarter 2015 GDP has fallen to +1.0%. It started at +2.5%, but as the economic data that contribute to GDP were released, that estimate started to shrink. If the Atlanta Fed's estimate holds true, annual GDP for 2015 will be +1.84%, a little more than half the rate of the post-WW2 average. This would be a great disappointment to many forecasters who were anticipating 2015 to be +3%. We won't know the first official estimate of Q4-2015 GDP until January 29, with much more economic data that can change the Atlanta Fed estimate in these next weeks. It will not be until that time that we get another look at proprietors' income. In the meantime, we'll be looking at the next NFIB's small business index which is in a multi-month decline. That will be released on Tuesday, January 12.