According to County Business Patterns, in 2010, US establishments in NAICS 32312 had an annual payroll of $1.4 billion. Payrolls declined steadily over the course of the 2010s, closing out the decade at $1.0 billion in 2019. However adjusting for inflation, payrolls declined by -38% over the course of the decade. In macro news: AIA’s Architecture Billings Index (ABI) indicates that demand for design services remains strong, boding well for commercial real estate construction and thus signage projects. 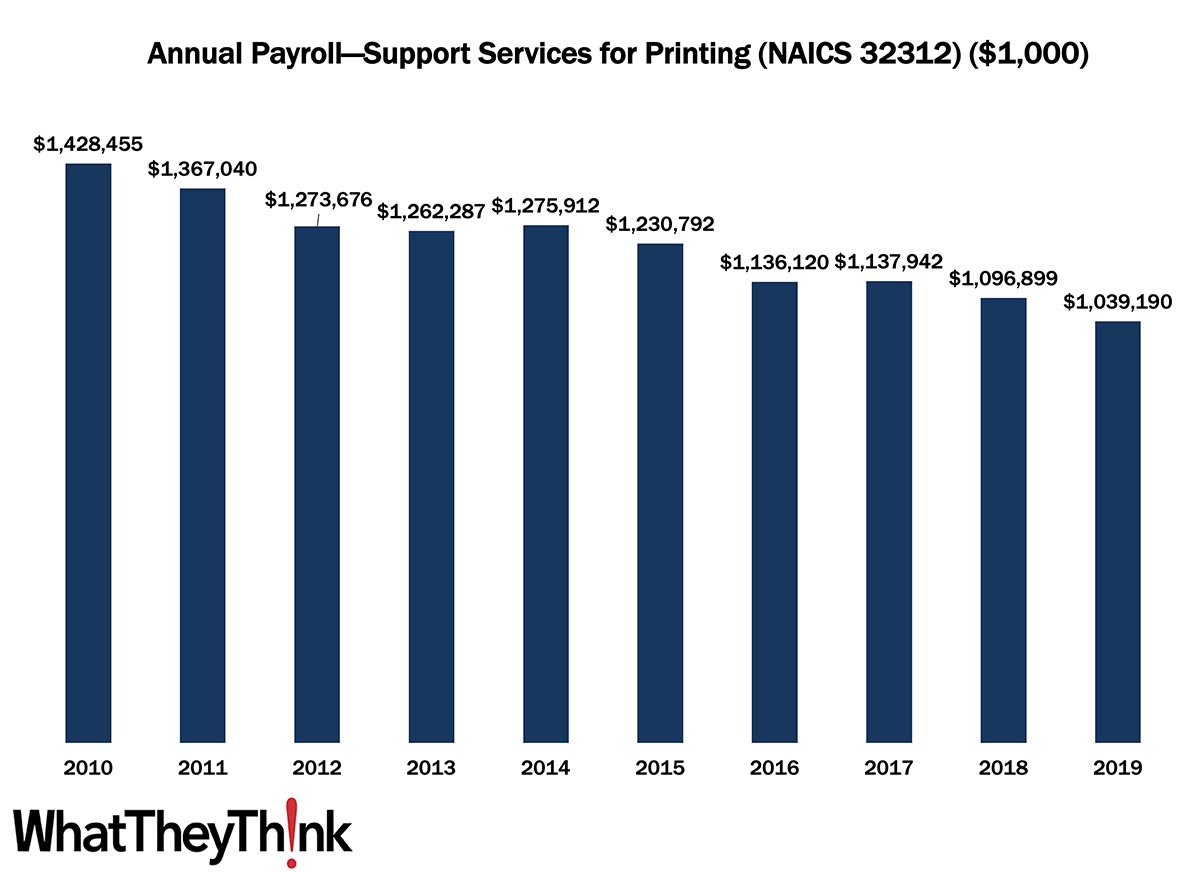 In 2010, US pre- and postpress establishments had an annual payroll of $1.4 billion. Payrolls declined steadily over the 2010s, finishing out at $2.0 billion in 2019. Note that County Business Patterns payroll data are reported in current, not inflation-adjusted, dollars. If we were to adjust for inflation, 2010 payroll would be equivalent to $1.6 billion in 2019, so we are essentially looking at an overall decline of -38% in payroll over the course of the decade.

As we remarked when we looked at establishments, there are two things going on, given that this data includes two different kinds of businesses.

In terms of prepress, if you read the definition of “prepress” above, it’s surprising that payrolls haven’t declined more than they have: prepress has largely been absorbed into the printing process itself. Especially in digital printing workflows, prepress is little more than what happens in the digital front end. (This is not a new story; remember when “color separators” were a large and thriving business category?) As a result, there is no need for an entire business to be dedicated to prepress the way there was back in the heyday of the service bureau. So these old “prepress” businesses either went out of business or became another business category, likely a small commercial print shop or wide-format services provider.

Finishing is a different kettle of fish. A lot of print businesses have been adding in-house binding and finishing, since, in this age of fast turnaround, who has time to send a job out for finishing? Still, dedicated bindery services businesses are still around, and they have shifted a lot of their focus to higher-end finishing services, such as embellishments (be they digital or not), and the kinds of services that print businesses may not want to add in-house. After all, one print shop can’t add every finishing process under the sun, despite the growing prevalence if all-in-one machines.

At the same time, factors affecting employment and thus payroll include increasing automation, which cuts down the number of employees a shop needs to operate a piece (or set) of machinery.

(For those playing along at home, if you’re wondering how many of these establishments are prepress and how many are postpress, before 2012, County Business Patterns broke them out separately, and in 2011, the balance was 56% prepress and 44% postpress. We expect that since then the number of postpress )

Batten down the hatches! 2020 County Business Patterns is out! The next slice’n’dice data analysis feature will start an update of industry establishment counts for 2020.

Every now and then, we like to check in with the American Institute of Architects (AIA) Architecture Billings Index (ABI), which is a leading indicator for new commercial real estate investment and thus potential new signage projects. According to the AIA, in May, demand for design services slowed but remained strong:

The ABI score for May was 53.5. While this score is down from April’s score of 56.5, it still indicates very strong business conditions overall (any score above 50 indicates an increase in billings from the prior month). Also in May, both the new project inquiries and design contracts indexes expanded, posting scores of 63.9 and 56.9 respectively.

“The strength in design activity over the past three months has produced a broader base of gains. The Northeast region and Institutional sector have struggled with slow billings activity, but now have posted consecutive months of positive scores.” said AIA Chief Economist, Kermit Baker, Hon. AIA, PhD. “With the improvement in inquiries and new design projects, demand for design services will likely remain high for the next several months, despite strong economic headwinds.”The ABI includes commercial and industrial facilities like office buildings, hotels, schools, hospitals, and other institutions, as well as multi-family residences.

The ABI has been above 50 for 16 consecutive months, which is good news. The rule of thumb is that this index leads actual commercial real estate investment by about 9–12 months, so, barring any further supply chain disruptions, there looks to be a pick-up in real estate development as we head through the latter half of 2022. Sign businesses should keep an eye on construction activity in their area to get a jump on involvement in these projects.