According to County Business Patterns, in 2010, there were 70,507 employees in NAICS 33995 (Sign Manufacturing). This NAICS category tumbled in the wake of the Great Recession, ultimately climbing to 76,944 employees in 2019. In macro news: Inflation continues to continue to climb. 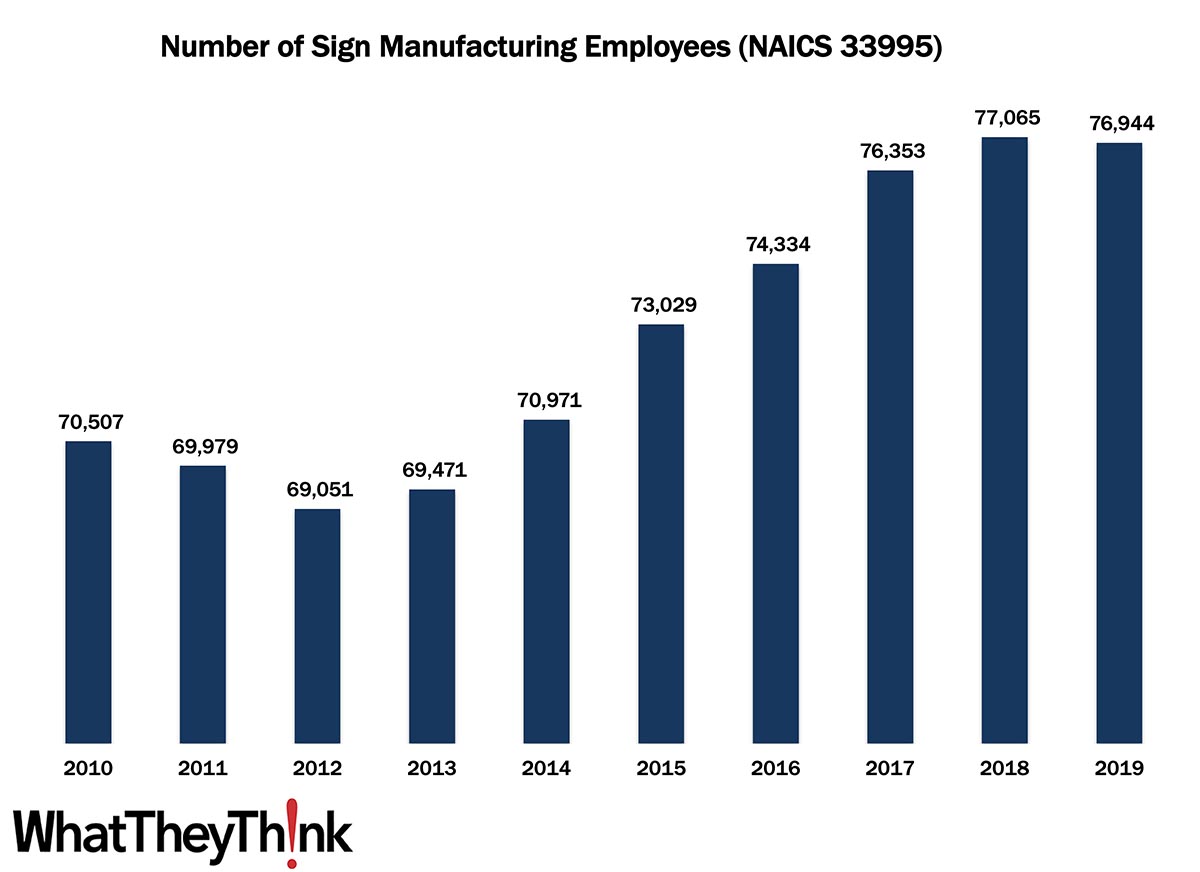 According to County Business Patterns, in 2010, there were 70,507 employees in NAICS 33995 (Sign Manufacturing). Establishments and employment in this NAICS category declined in the wake of the Great Recession, ultimately climbing back up to 76,944 employees in 2019.

This industry comprises establishments primarily engaged in manufacturing signs and related displays of all materials (except printing paper and paperboard signs, notices, displays).

As we said in our look at establishments, during the Great Recession, there was decreased demand for signage, but that trend reversed itself as new businesses began forming in an improving economy, and existing businesses thought it a good time for a rebrand. By the end of the decade, rebrand cycles were shorter, while at the same time consolidation in verticals such as healthcare and banking drove up the demand for new signage projects. (Say what you want about consolidation, but it does tend to drive a lot of signage—or even other print—projects.) The final years of the Before Times saw a lot of busines expansion, with chains opening new locations, driving up the demand for signage, driving up the number of providers of signage, and in turn the number of employees in signage establishments.

Next up in our data slice’n’dice series, we look at employment in:

The Consumer Price Index for All Urban Consumers (CPI-U) increased 0.8 percent in February on a seasonally adjusted basis after rising 0.6 percent in January, the U.S. Bureau of Labor Statistics reported today. Over the last 12 months, the all items index increased 7.9 percent before seasonal adjustment.

Increases in the indexes for gasoline, shelter, and food were the largest contributors to the seasonally adjusted all items increase. The gasoline index rose 6.6 percent in February and accounted for almost a third of the all items monthly increase; other energy component indexes were mixed. The food index rose 1.0 percent as the food at home index rose 1.4 percent; both were the largest monthly increases since April 2020.

The index for all items less food and energy rose 0.5 percent in February following a 0.6-percent increase the prior month. The shelter index was by far the biggest factor in the increase, with a broad set of indexes also contributing, including those for recreation, household furnishings and operations, motor vehicle insurance, personal care, and airline fares.

Bear in mind, this was before the invasion of Ukraine and doesn’t reflect the impact on energy prices, so hold onto your hats for March numbers. Still, this was about what economists were expecting, so there’s that.