According to County Business Patterns, in 2010, there were 10,166 employees in NAICS 511199 (All Other Publishers). Over the course of the decade, employment in this category steadily declined to bottom out at 4,999 in 2018. In macro news, last year’s “official” COVID recession lasted only two months, according to the NBER. 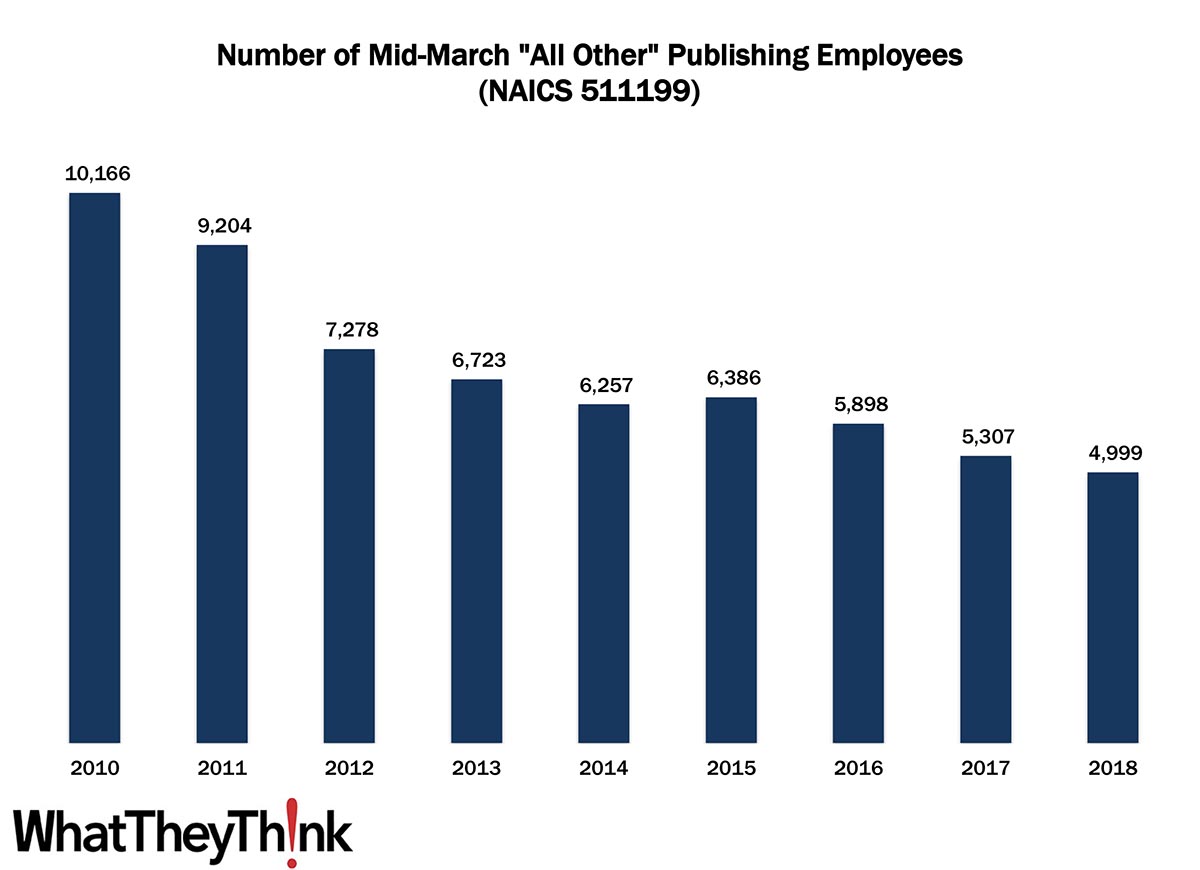 In 2010, there were 10,166 employees working in NAICS 511199 (All Other Publishers). This is a catchall category that includes publishers who specialize in printed postcards, art prints, calendars, maps and atlases, etc. Unfortunately, a lot of these print applications have been largely replaced by digital alternatives: printed and mailed postcards have been superseded by posting pictures of trips and events on social media sites, for example, while printed maps have almost entirely been replaced by GPS/GoogleMaps (except for historical or collectors maps). Art prints are increasingly produced digitally on inkjet equipment like Epson SureColor units, although wall and “page-a-day” calendars are still fairly strong, despite electronic calendar apps.

Next time, we’ll look at:

In determining that a trough occurred in April 2020, the committee did not conclude that the economy has returned to operating at normal capacity. An expansion is a period of rising economic activity spread across the economy, normally visible in real GDP, real income, employment, industrial production, and wholesale-retail sales. Economic activity is typically below normal in the early stages of an expansion, and it sometimes remains so well into the expansion.

By the way, you may recall that a recession was once defined as two consecutive quarters of economic decline, but the NBER has since changed the (or, perhaps, its) definition to “significant decline in economic activity spread across the economy, lasting more than a few months, normally visible in real GDP, real income, employment, industrial production, and wholesale-retail sales.”

At any rate, as for last year’s recession, they add:

The committee decided that any future downturn of the economy would be a new recession and not a continuation of the recession associated with the February 2020 peak. The basis for this decision was the length and strength of the recovery to date.