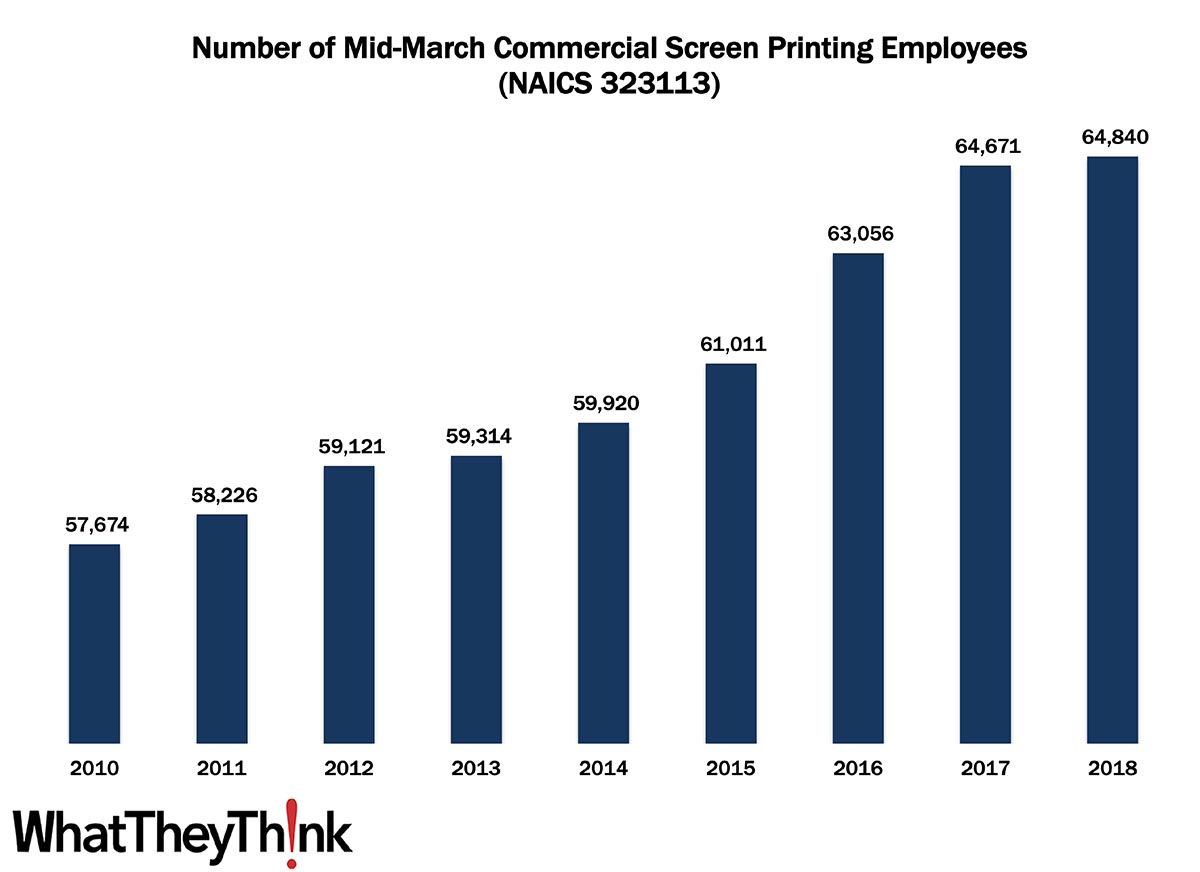 When we last looked at screen printing establishments, we noted that establishments had seen consistent growth from year to year, almost the exact opposite of general commercial printing, where establishments have been consistently declining. Likewise with employees. We attribute this to the rise of specialty printing. Screen is commonly used to print on textiles (T-shirts being the emblematic example), and these kinds of items really started to take off in the past decade. Couple this with the rise of short-run and digital technologies that can complement screen, and as demand for specialty items has increased, establishments and thus their employee counts have grown to take advantage of this hot print application area.

Folks who have been round these parts for a while may recall that after the Great Recession, Dr. Joe used to track what he called “recovery indicators,” six economic data points that, when they all started moving in lockstep in a positive direction, indicated that the recession would be “officially” over. Those indicators were the NASDAQ, ISM non-manufacturing new orders and imports, ISM manufacturing new orders and imports, and proprietors’ income.*

Likewise, Calculated Risk, our favorite economics blog, has been tracking the COVID-19 recovery via “Seven High Frequency Indicators for the Economy.” Given that the pandemic has not affected all areas of the economy equally, tracking the rebound in certain sectors—most of which are the printing industry’s top verticals—can give us a sense of how we’re doing. The sectors predominantly comprise travel and entertainment, and they are:

While they are not perfect (Bill McBride, who writes the CR blog, adds specific caveats for each data source) and are not updated on the same schedule and thus don’t correspond to the same weeks, these data points indicate the extent to which people are increasingly (or decreasingly) out and about. McBride updates these each week, and if we’re ambitious, we may in the future compile the changes in a table à la Dr. Joe’s recovery indicators. For now, though, it’s worth clicking through—there are charts galore and links to the original data sources.

As vaccinations continue, it will be interesting to see what impact they have on these various data points and if we are indeed seeing a rebound in some of the sectors most acutely affected by the pandemic.

* They never did indicate that the recession was over, even by 2016, so we’re not sure** if it was the economy and the recession never did end, or if the choice of indicators was a bit flawed.