In 2010, there were 2,205 establishments in NAICS 32221 (Paperboard Container Manufacturing). By 2018, that number had declined -11% to 1,961. In macro news, the American Institute of Architects’ Architecture Billings Index (ABI) score was up in September. This is a leading indicator for the economy in general, but also for the signage market in particular. 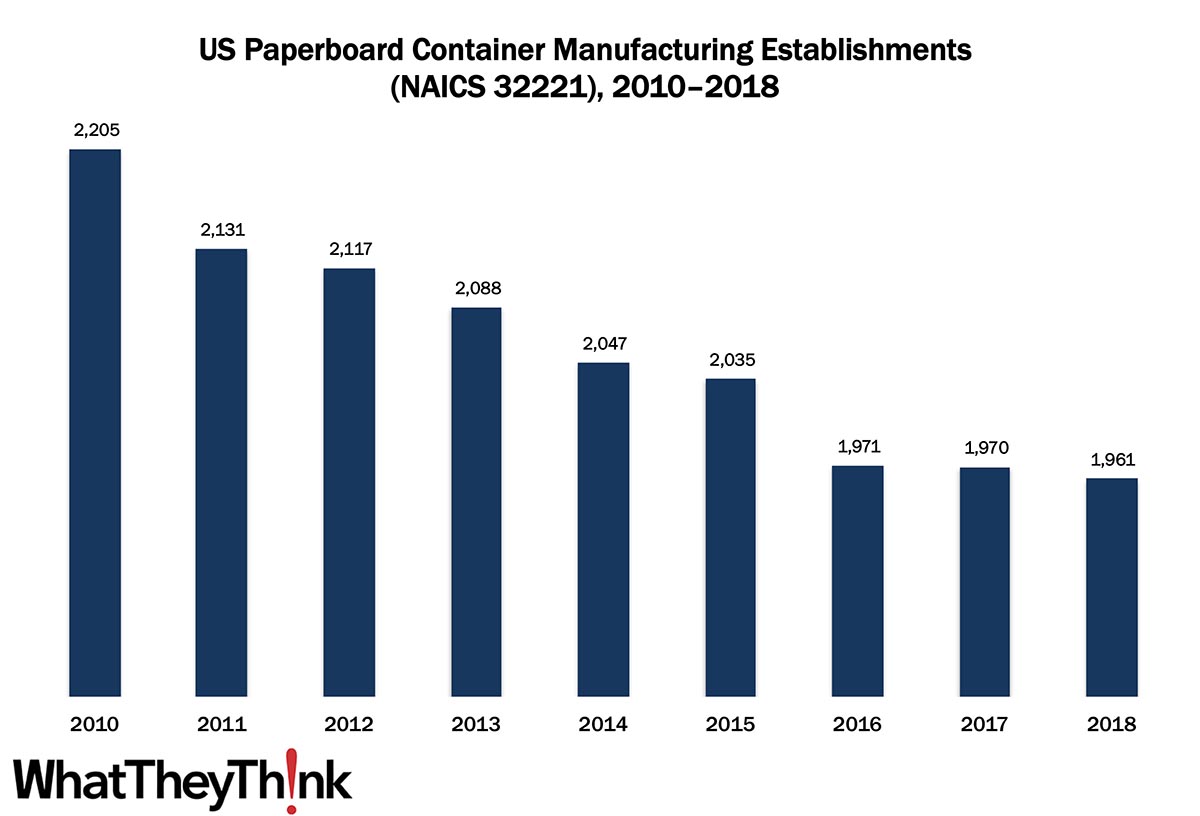 In our ongoing, semi-weekly look at establishment and employee counts of graphic arts businesses, we have turned to packaging/paper converting establishments. In 2010, there were 2,205 establishments in NAICS 32221 (Paperboard Container Manufacturing), but by 2018, that number had declined to 1,961.

In this category, software prototyping of packaging such as boxes results in innovative designs, which can optimize the logistics of transporting packages, especially from overseas manufacturers. This has only accelerated since, but environmental concerns are becoming more important in box conversion. These data predate the COVID pandemic, but even in the mid-2010s, ecommerce has been driving demand for more and newer types of corrugated boxes.

This four-digit NAICS comprises a variety of different converted packaging types, and over the next several months, we will be looking at them in turn, including:

We came across an interesting data point via the economics blog Calculated Risk: the American Institute of Architects (AIA) tracks billing by architectural firms, and calculates what it calls the AIA Architecture Billings Index (ABI) score. The most recent ABI score was for September:

AIA’s ABI score for September was 47.0 compared to 40.0 in August (any score below 50 indicates a decline in firm billings). Last month’s score indicates overall revenue at U.S architecture firms continued to decline from August to September, however, the pace of decline slowed significantly.

Calculated Risk adds, “This includes commercial and industrial facilities like hotels and office buildings, multi-family residential, as well as schools, hospitals and other institutions.”

That the slowdown in architectural firms’ billings moderated in September is good news, even though the ABI score has been below 50 for seven months in a row (a bad thing), which points to a decline in investment in commercial real estate.

This is important for the signage industry because new construction is a primary market for signmaking businesses. Indeed, on Wednesday, the International Sign Association held its Q3 2020 Economic Report webinar and highlighted the economic impact of the architecture industry on the sign business and said that although “there is still a lot of construction happening,” and thus still a need for architectural signage—particularly in health care facilities—we have not seen the majority of it taking place—yet.

The AIA also calculates a score for inquiries into new construction projects:

Inquiries into new projects during September grew for the second time since February, with a score of 57.2 compared to 51.6 in August. The value of new design contracts moderated to a score of 48.9 in September from 46.0 the previous month.

So it looks like early 2021 may see a construction rebound.

(We will have a full report on the ISA Q3 2020 Economic webinar in our November/December print edition.)