As readers of The Target Report know, we view the industry from the perspective of transactional activity. Over the past eight years, we have chronicled, logged, and commented on the robust merger and acquisition activity in the printing, packaging, and related industries. As we get ready for the fall season which is replete with multiple trade shows, peer group meetings, and opportunities as more companies come to market, we take a look back at the data on transactional activity that we have compiled and reported to you in our monthly reports. Our view this month is from the “30,000-foot level,” parsing the industry transactional data by industry segment, including bankruptcy filings and plant closures. This year we take a deeper dive and seek to provide some insight into not just the quantity and seasonality of transactions by segment, but also a view into the rationale that is driving deal activity.

We reviewed, categorized, sorted, counted, and charted the data we have collected, comparing the past two years. Based on the number of transactions, the past 12 months were a bit quieter than the 12 months ended last August, with approximately 8% fewer transactions. Last year at this time, our year-over-year analysis showed that the trends were amazingly consistent to the prior year. M&A activity in our industry has slowed down, but not by much.

Commercial printing companies (general, retail inserts, catalog printers, copy shops, and traditional display) and packaging companies (labels, folding cartons, flexible packaging and corrugated cartons) once again rank highest in the number of deals announced, followed closely by print-centric publishing companies (newspapers and magazines). Activity in the wide-format segment (banners, grand format, trade show, and retail signage) was steady and stable. There were a significant number of deals in the materials manufacturing segment, primarily due to the turmoil in the papermaking and distribution industry. 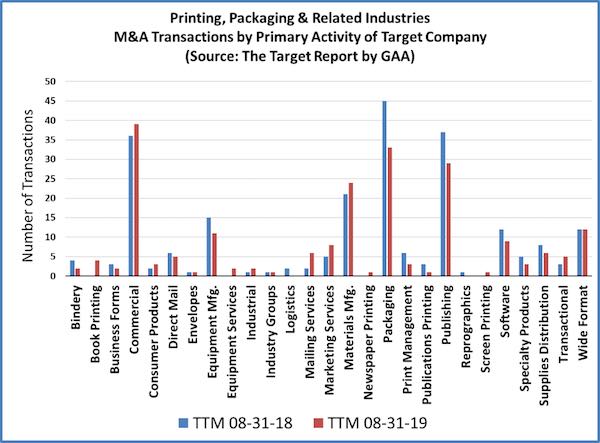 When we look at the seasonality of transactional activity, as shown in the chart below, we see a picture of the overall reduced activity, with a consistent downward trend each year as we get to the holiday season and year end. 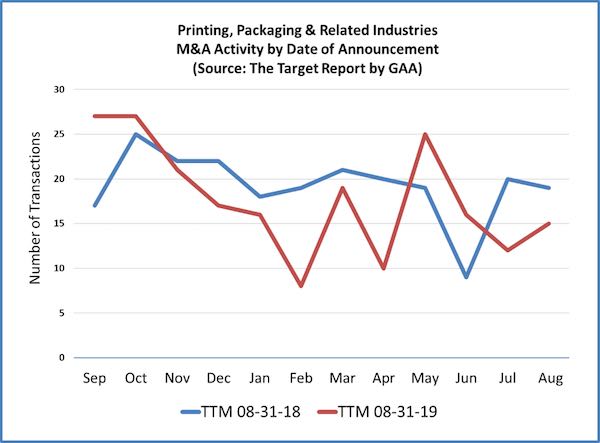 Transactional activity tells us that an industry segment is undergoing change. However, the number of deals does not tell us if that activity is indicative of positive or negative change. To determine a directional indication, we track the number of bankruptcy filings and non-bankruptcy plant closures and correlate this information with the overall transactional activity. Our thesis, born out over several years and confirmed by industry stats derived from other sources, is that an industry segment with a high number of transactions that is also experiencing closures and bankruptcies is or will be in a contraction phase. There will be opportunities for consolidation at bargain prices for those companies that defy the downward trend. This has certainly been true in the commercial printing segment (and obvious to even those outside our industry).

As we have noted over the past year, there have been warning signs emerging from our data in the wide-format segment, especially in the undifferentiated end of the wide-format business that offers wide-format printing on a square-foot pricing basis. Book printing has also been a difficult segment for some, with acquisition opportunities presenting from bankruptcies and closures.

Conversely, segments in which the number of transactions does not correlate directly with closures and bankruptcies are more likely to be expanding and consolidation opportunities will come at much higher prices. Virtually all the packaging segments are experiencing steady transactional activity, without the corresponding bankruptcy filings and plant closures, indicating a very healthy environment for sellers as the industry consolidates. 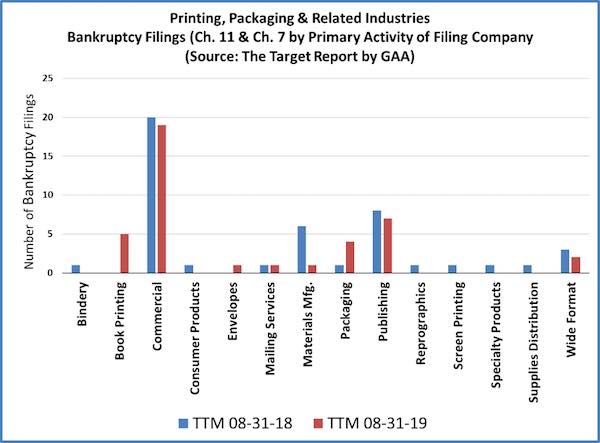 As noted, we also track activity in non-bankruptcy plant closures; many companies simply close up and just disappear without a formal bankruptcy filing. Other times, a closure does not mean that the company has ceased operating, it may simply be that one of the larger printing firms is “rationalizing” their production capacity. Either way, closures are indicative of change, usually resulting from downward pressure in a market segment. Consistent with the other data and as expected, general commercial printing companies represent the majority of printing facilities closing up shop.

Several binderies, book printing and newspaper printing companies closed up shop over the past year. Newspaper and magazine publishers and the printers that serve them have closed, as well as a number of paper mills affected by the reduction in demand for these papers. 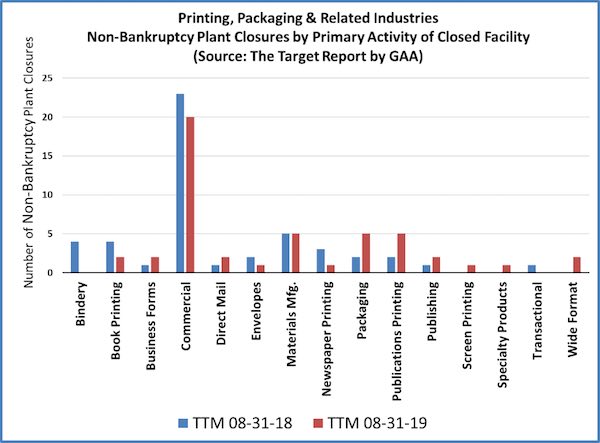 When we look at the rationale behind the transactions in the commercial printing segment, we find a loud and clear predominance of tuck-in deals in which the customers of the acquired company are transitioned to the buyer’s production facility. In these tuck-in transactions, buyers will often leave the disposition of the plant and equipment to the seller, or to the seller’s agent, avoiding responsibility for trade and other debt, possibly “cherry picking” certain equipment that is needed or desirable for the smooth continued servicing of the acquired customers. In two instances out of the 28 tuck-ins, the transaction was a “reverse tuck-in” in which the buyer acquired the assets and facility of the seller and moved their business into the purchased company.

Nonetheless, there were still 11 acquisitions in the commercial printing segment where the acquired facility was important and will remain in operation. That was especially notable in one acquisition of a retail inserts printing company and another transaction where the target company produced retail displays.

There were seven acquisitions where the acquirer noted that the purchased company added to their service offerings, as well as seven deals where the logic was to expand geographically. Of all 39 transactions that we noted in the commercial printing segment, only four had a private equity sponsor and there were no companies purchased to form a new “platform” for building out a larger company. 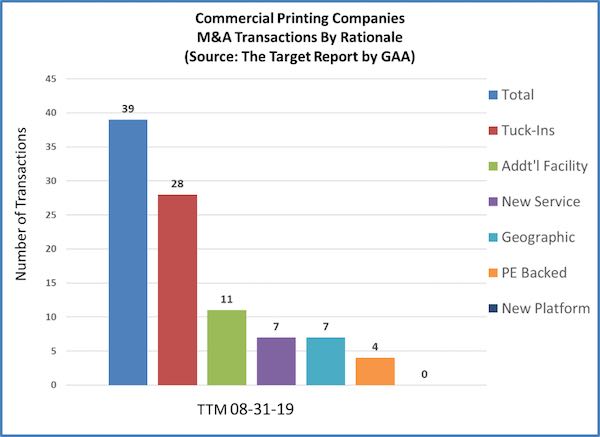 The picture that emerges in the packaging segment is very different. Of the 33 transactions that we recorded over the past 12 months in the packaging segment, only two were reported to be tuck-ins, one that produced labels and one that manufactured folding cartons. In all the other cases, the buyers noted that the acquired location was an important element of the rationale to complete the deal. In some, the acquired company had multiple locations, or was global in scope. In 18 instances, geographic expansion or diversity of the acquired locations was also noted as a key element in the buyer’s logic.

Private equity was involved in 18 of the transactions, clear evidence that the roll-up model, with financial sponsorship from private equity, is in full swing across the various packaging segments. Interestingly, we did not note any new “platforms” being established by private equity in packaging, indicating to us that competition is already stiff among the existing players for packaging properties as they come on the market, squeezing out opportunities for the formation of new platform companies. 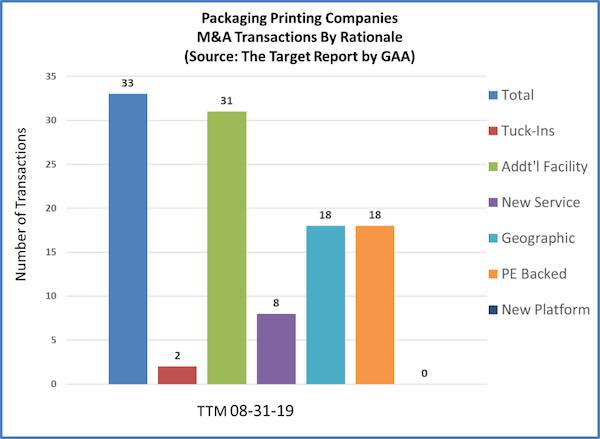 For our purposes in forming a picture of the various market segments that comprise the overall print-centric industries, we separate out companies that produce mostly wide-format products from the more generalized commercial printing segment. Here we see proportionately fewer tuck-ins than in general commercial printing, with only three tuck-ins noted out of 12 total deals. The other nine transactions were based on maintaining operations at the acquired facility, some of which were significant in size.

Only two of the deals were based on adding wide format as a new service offering, which we attribute to the maturation of the wide-format business and widespread adoption of these technologies into the larger industry. Three buyers noted geographic expansion as a fundamental reason for completing the acquisition; one of the larger deals was billed as a merger of equals and created a national footprint bridging east and west coasts. Four deals involved private equity firms, and there were two new platforms formed, indicating to us that private equity is taking note of the wide-format segment. 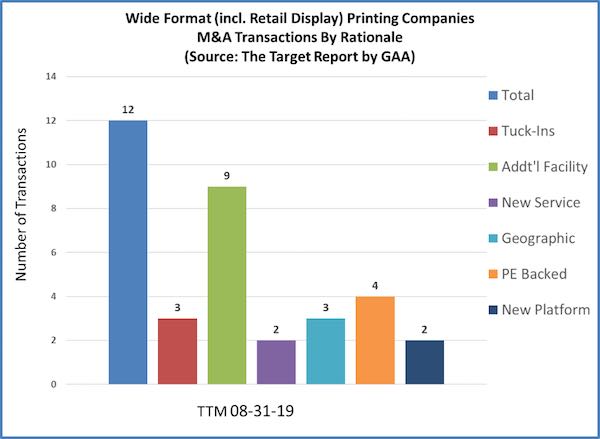 And finally, we dug into the mailing services segment, which we have found to be more active over the past couple years. Of six deals we recorded, two were tuck-ins, in both cases the acquirer was a commercial printing company that was seeking to add mailing services or to expand and improve their current service offering. Private equity was not involved in any of the transactions and no new platform companies were formed. Two of the deals expanded the buyer’s business geographically, and in one transaction a commercial printing company acquired a fairly significant mailing services business, announcing that the acquired location would continue as a stand-alone operation. 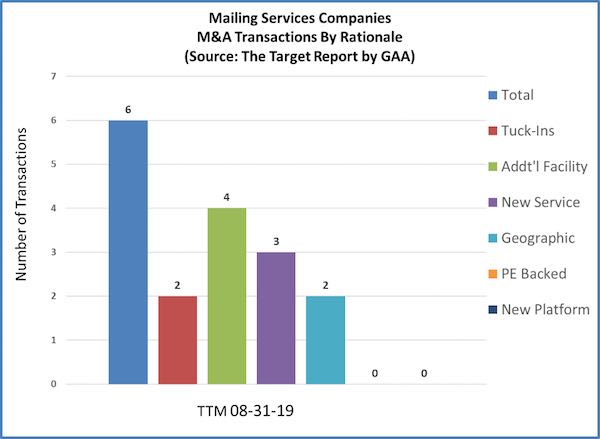 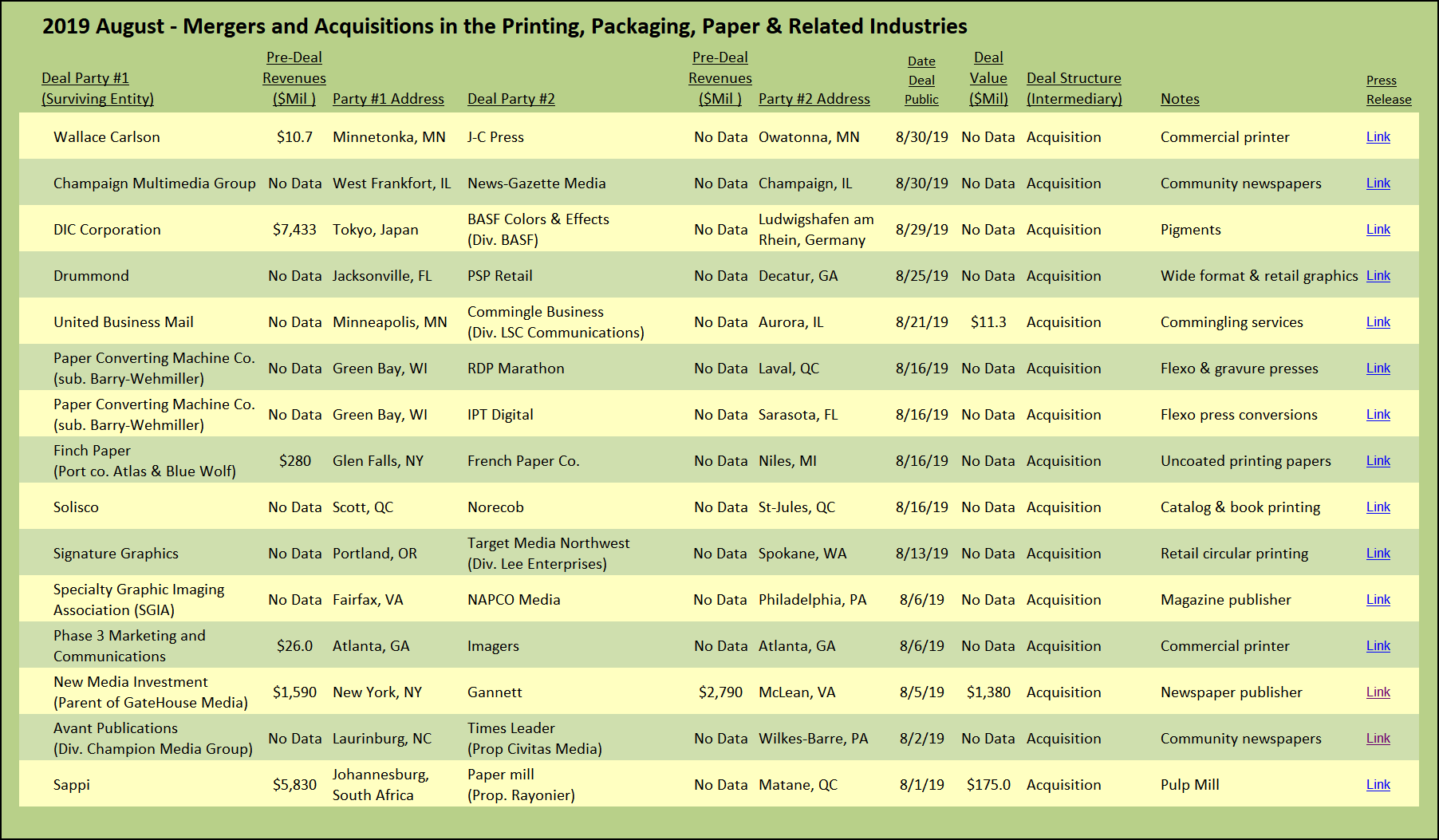