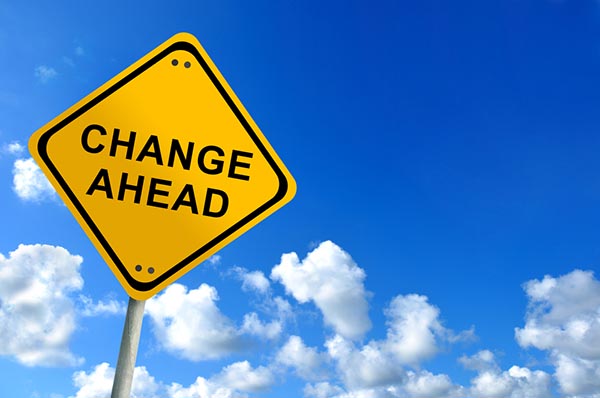 The shakeout in the world of publishing continues unabated as titles in print face continued downward pressure in circulation, declining advertising revenues, and inability to support the cost of editorial staffs, paper, printing and distribution. Meanwhile, the two remaining titans of magazine printing duke it out with the U.S. Department of Justice over their proposed merger. Designed to rationalize excess printing capacity with declining demand, the acquisition of LSC Communications by Quad can also be viewed as a desperate bid to gain pricing leverage over already beleaguered publishers.

One such publisher, Condé Nast, is the venerable company behind classic publications such as Vogue, Vanity Fair, The New Yorker, and GQ. Founded in 1909, the company has a long history of managing change in the media landscape and has kept up with the times with the acquisition of Wired magazine, the chronicler of emerging technologies originally inspired by the Whole Earth Catalog. In 2015,Condé Nast acquired the hip online music website Pitchfork, shortly thereafter ceasing publication of the accompanying printed quarterly magazine, retaining only the online delivery channels.

With loses reported in excess of $120 million announced last year, Condé Nast embarked on a sale process to offload its Brides, Golf Digest, and W magazine titles. Brides magazine was sold in May. The buyer announced that after 85 years in print, the upcoming August/September issue will be the last time the magazine is printed, after which the publication goes to a strictly online format. Golf Digest was also sold in May. No plans were announced to cease publishing the print edition; at least that’s the scoop, for now.

In the latest resettlement of money-losing titles, W magazine moves from its prestigious ownership under Condé Nast to the less-than-glamorous stewardship of its new owner, Future Media Group. Future Media is the new holding company owned by the publisher of Surface magazine, the edgy, avant garde design and hipster-culture, free-in-your-hotel-room glossy journal, as well as publisher of Watch Journal, the super-lux magazine distributed free at private air terminals and in luxurious high-end hotels.

The printed journals are core to Future Media’s distribution model, placed on behalf of advertisers in places of conspicuous consumption. Presumably print will continue to be a core format for W magazine; nonetheless Future Media will continue the transition, begun under Condé Nast, of W’s editorial content to online website and social media channels. Leaving no doubt about this, Future Media’s chief executive stated that the newly appointed editor-in-chief “has a forward-thinking sensibility that will bring Wbeyond its core print distribution into various offline, online and augmented formats.”

Meredith, the folksy Midwest publisher, has been deliberately and steadily dismantling the portfolio of Time-Life publications that it acquired in 2018. In keeping with its focus on “lifestyle” publications primarily aimed at a female audience, Meredith has to date retained only the titles acquired in the Time-Life deal that fit this demographic audience, including Entertainment Weekly, InStyle, Travel & Leisure, and People. The titles that are “newsier” and therefore contain quickly outdated information, have now all been sold, including Time Magazine, Fortune (see The Target Report: The Waning Fortunes of the Time Inc. Magazines), and Sports Illustrated (see The Target Report: Sports Illustrated Print Edition Heads to Hospice). Originally planning to sell Money magazine, Meredith announced that instead it will keep the title; however, the current issue June/July will be the last in print. Money will be transitioned to online-only content.

Apparently, the U.S. Department of Justice determined that the last thing that magazine and book publishers needed was the merger of the two remaining behemoth printers and has sued to block Quad’s acquisition of LSC Communications. In an interesting twist, the Department of Justice lawsuit used the merger candidates’ own words against them, quoting several examples in which each side complained that if only they didn’t have to compete with the other, that would eliminate the last remaining impediment to establishing real pricing leverage in the market, especially for the printing and distribution of long-run high quality glossy titles.

In the event that Quad and LSC Communications prevail over the lawsuit filed by the Department of Justice to block their announced merger, the combined entity will be able to slash capacity and gain price increases. However, the ongoing reduction in the number of long and medium-run glossy publications that remain in print format may in itself be sufficient for publishers to maintain their downward pressure on print pricing.

Shutterfly, the 800-pound gorilla in the digital photo storage, prints processing, and personalized merchandise segment, announced that it was exiting the public markets and accepting an offer for $2.7 billion, including the assumption of debt, from giant private equity firm Apollo Global  Management. Just to make sure that it would be the dominant player in a highly competitive and fragmented space, Apollo also announced that it was also snapping up Snapfish, an also-ran in the photo books and related online photo products printing segment.

Included with the Shutterfly deal, Apollo will also own Lifetouch, the photography and photo print company that Shutterfly acquired in January 2018. When Shutterfly announced the acquisition of Lifetouch, its market value soared as investors became enthusiastic about Shutterfly’s access to the 25 million students that Lifetouch photographs each year. That excitement did not last long when the projected synergies did not develop. Shutterfly’s stock price was overexposed and quickly retreated to levels not seen since 2016, creating an attractive opportunity for Apollo’s move to consolidate the segment.

Mittera continues its national roll-up strategy with the acquisition of Sprint Denver, a commercial printing company. The Sprint manufacturing operation is slated to be consolidated into Mittera’s existing facilities. Mittera already has a facility in Denver, acquired with the purchase of the assets of Kansas City-based Henry Wurst company. The deal to acquire Sprint is the latest in a long string of acquisitions for Mittera, effectively a roll-up of roll-ups. (See The Target Report: Consolidation in Commercial Printing Rolls On.)

Xpressdocs, a self-service on-demand marketing company based in Fort Worth, Tex., acquired Amazingmail, a Phoenix, Ariz.-based self-service direct mail printing company that utilizes proprietary software to connect with and support national brands with print runs as unique as one piece or up to many thousands per day. Xpressdocs completed the transaction with backing by private equity firm Falcata Capital.

Colortree Group, a Richmond, Va., direct mail components printing company, closed its doors in June. This sudden closure was an abrupt about-face from the optimistic picture painted in 2017 when management acquired the company from Boathouse Capital. Boathouse had originally backed management in 2011 in a roll-up strategy, starting with the combination of two Virginia direct mail printing companies, Colortree and Graphic Innovations. The roll-up strategy apparently stalled after the 2013 acquisition of Direct Impressions, another Virginia-based direct mail printer. Eventually, Boathouse bailed out and sold the company back to the original management via the newly formed and oddly named entity, the Stingem Management Group. Unfortunately, it’s the 240 employees of this $57 million revenue printing company that got stung. 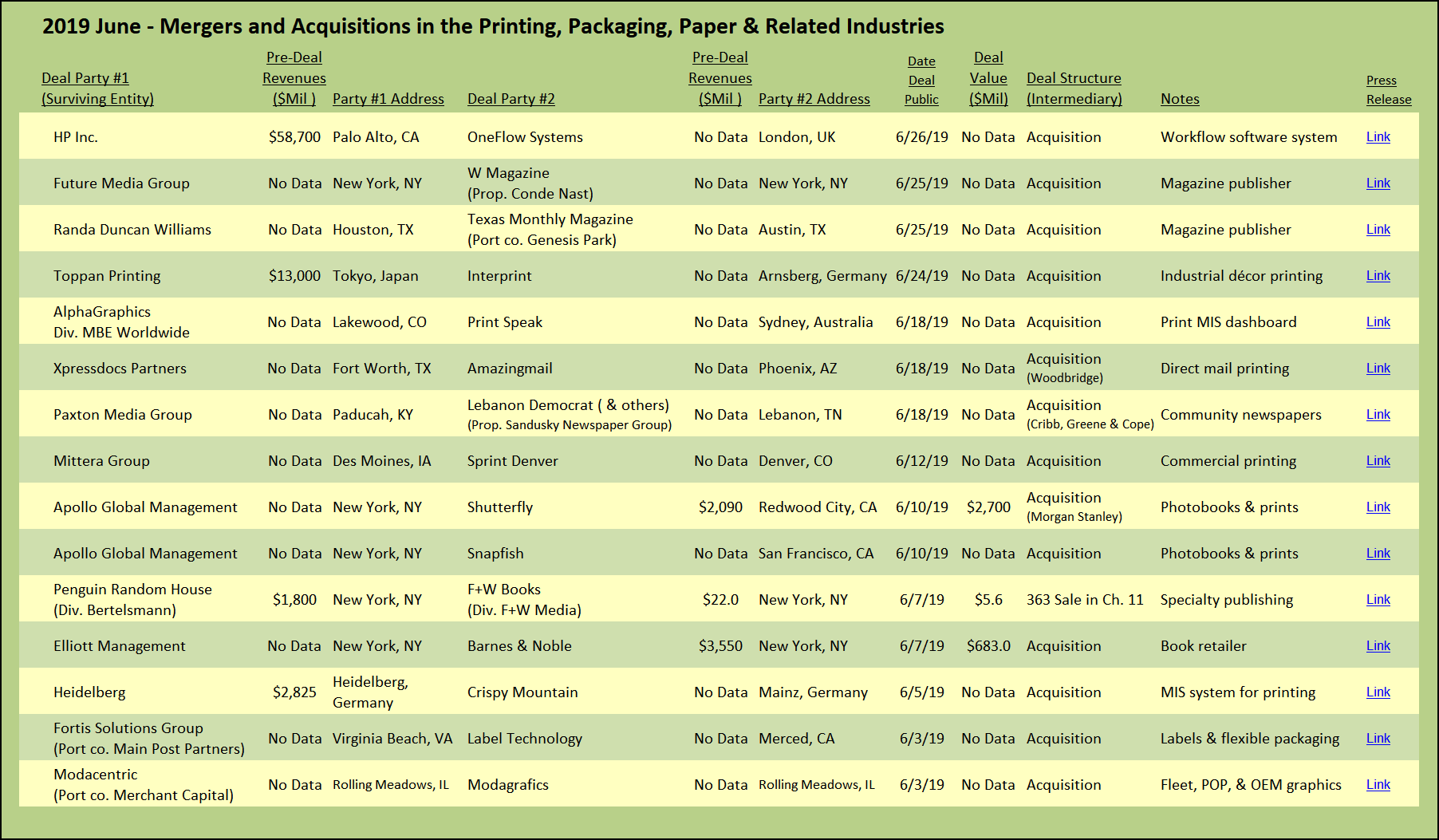 View The Target Report online, complete with deal logs and links to sources for June 2019