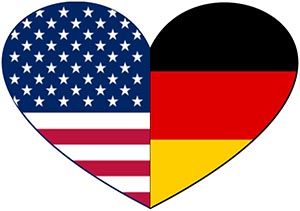 Archrivals Goss International and manroland web systems have agreed to merge their businesses. Both companies are manufacturers of full-size web offset printing presses for the production of newspapers, commercial printing and packaging. Demand for these high-volume printing presses has collapsed in lockstep with the decline of newspapers and other long-run multi-page printed products.

Locked in a fierce battle for dominance, fought out in pressrooms for more than a hundred years, the fortunes of Goss and manroland have risen and fallen with the changes in print volumes and technology. Focused in recent years exclusively on building high-volume web presses, Goss and manroland web systems have been especially hard-hit. A truce has now been declared and the two adversaries will become one.

Founded in Chicago in 1885, Goss grew to become a prominent manufacturer of newspaper presses with machines operating around the globe. In 1957, the company merged with another American press manufacturer to become Miehle-Goss-Dexter (the elders among us in the printing industry will remember the many Miehle presses, both letterpress and offset, that were standard in commercial pressrooms before yielding to Heidelberg’s domination).

The merged Goss entity lost its independence in a 1969 hostile takeover by North American Rockwell, and the Goss name disappeared into Rockwell, operating as the MGD Graphics Systems division. The company re-emerged in 1996 under private equity sponsorship, reborn under the Goss nameplate when it was spun out of Rockwell International, which had transitioned to a high-technology company that had bigger fish to fry than manufacturing mundane printing presses (e.g. B-1 bombers and the space shuttle fleet).

As a newly independent and highly leveraged company, Goss filed for Chapter 11 bankruptcy in 1999 to shed debt and restructure, and then filed bankruptcy again in 2001 as its former lenders and bondholders swapped debt for equity and took over ownership of the company, now renamed Goss International. In a fortuitous development for Goss, Heidelberg fell on hard times in 2004 and sold its web press division to Goss. The sale included the famous gapless “Sunday” technology concept that Heidelberg had itself acquired when it bought the Harris web press operation in 1988 and brought to market in 1993 (famous, that is, if you follow the printing industry).

Sold to Shanghai Electric Group in 2010, and then again in 2015, Goss was once again under private equity and American ownership when American Industrial Partners (“AIP”) acquired the company back from the Chinese. When Goss joins manroland web systems in the planned merger, AIP will retain an ownership position as the minority partner in the combined entity.

For a time, beginning in the 1960s, the two companies’ predecessors, Miehle-Goss-Dexter and Roland, had a brush with togetherness. The Miehle Roland presses sold in the US were actually German presses manufactured by Roland until that company reclaimed the right to distribute its machines in the US, thereafter sold simply as Roland machines, and eventually under the MAN Roland moniker.

Founded in 1871, the company that became MAN Roland was also brought under private equity ownership beginning in 2006. The company was subsequently rebranded as manroland in 2008 (inexplicably and annoyingly dropping the use of any capital letters in its corporate identity program). In 2011, manroland filed for insolvency (the European version of bankruptcy), eventually emerging as two separate companies with the sheetfed press division now owned by a Brit. The web division remained under German ownership, with the Possehl Group acquiring the web business from the receiver. The Possehl Group will hold the majority equity position in the combined company, which will be headquartered in Germany.

The armistice and union of these companies makes sense. The newspaper and commercial web presses these companies manufacture have very long service lives. Often, these presses are rebuilt and updated, so the installed fleet of these machines is sufficient to produce today’s reduced print demand with fewer new presses needed. Not surprisingly, both companies feature repair, parts, and maintenance services on their websites and have announced plans to expand their retrofit and upgrade business.

Contiweb, the Dutch company that manufacturers auxiliary printing equipment for web operations, including splicers, pasters, and dryers, was acquired by Goss in 2004. When Goss and manroland web systems merge, Contiweb will be spun off as an independent company. American Industrial Partners, the private equity fund that owns Goss, will be retaining full ownership of Contiweb.

Mark Andy, manufacturer of narrow-web flexographic presses, announced the acquisition of Presstek from American Industrial Partners. Presstek was the pioneer of the DI offset process, the direct digital imaging of printing plates right on the press (rather than the traditional process of imaging the plates off-press and then mounting the plates onto the press for printing). The company’s DI press technology has been used on a multitude of small-format offset presses, including those manufactured by Heidelberg, Ryobi, and KBA. Until the “run-of-one” digital printing technologies came of age, Presstek’s DI technology was the state of the art for short-run quality printing. The buyer of Presstek, Mark Andy, was itself formerly a portfolio company of American Industrial Partners, having been spun off from AIP in 2014 in a management buyout.

In the midst of all this activity involving press manufacturers, Heidelberg announced that it is integrating its US organization that supports it traditional offset operation with the US support organization for Gallus, the flexographic and rotary screen printing press company that Heidelberg acquired in 2014. (See The Target Report – June 2014).

While the market for printing companies was experiencing a lull in March, the activity involving companies that supply the printing industry was robust. Nekoosa, a portfolio company of Sentinel Capital Partners for only four months, began building out its platform with the acquisition of Catalina Graphic Films. Catalina, based in California, manufactures pressure-sensitive substrates for the wide-format printing segment.

When Mark Andy acquires Presstek, it will not be getting the manufacturing facilities and the waterless plate division. Instead, American Industrial Partners will be spinning off those assets into a new separate entity, Verico Technology. Verico will remain in Nashua, New Hampshire. (Clearly, AIP has an affinity for the printing industry!)

CCL Industries, a serial acquirer now approaching $4 billion in revenue, acquired the North American operations of Italy-based Treofan, manufacturer of films used in label and flexible packaging applications. CCL will market the acquired business under its Innovia brand name, the UK company it acquired in December 2016. CCL paid $199 million for the Treofan business which reported revenues of $165.5 million, a purchase-price multiple of 6.4 times the $31.2 million adjusted EBITDA. (For a summary of selected CCL transactional metrics, see The Target Report – May 2016.)

The Autajon Group, a global manufacturer of folding cartons and labels, acquired Thoro Packaging in Corona, California. The acquired company manufactures high-end folding cartons for the medical, pharmaceutical, health, and beauty markets. Autajon, based in France, now has 34 subsidiaries, mostly in Europe, with two locations in China and now three in the US. The company produces folding cartons, set-up boxes, point-of-sale displays, industrial labels, and labels for wines and spirits.

Pax Holdings, with backing by PS Capital Partners and Greyrock Capital Group, acquired Doran & Ward. The acquired company, located in Iowa, produces folding cartons and labels, with a niche specialty in boxes and wraps for soap.

Transcontinental continued its build-out in the flexible packaging segment and incursion into the US market with the acquisition of Multifilm Packaging, a flexible packaging printing company in Elgin, Illinois. Multifilm produces bags for cookies, twist and bar wraps for candies, and other packaging, primarily for food and confectionary products. (Tune in next month for more on Transcontinental’s dramatic follow-up move in early April.) 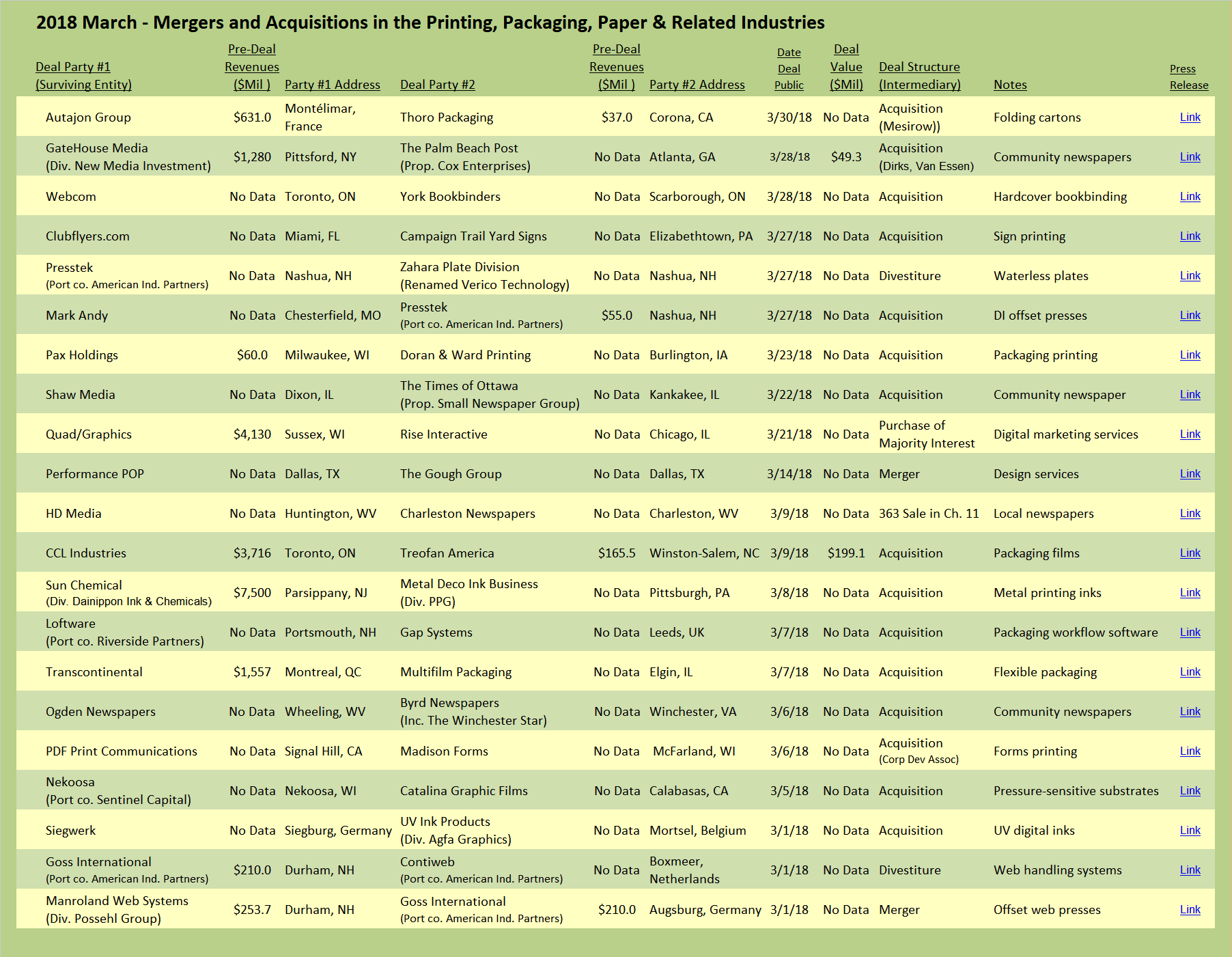