You Are the Package. Do You Like What You See?

We interact with packages so much and so often that we sometimes begin to merge with them—and they with us. 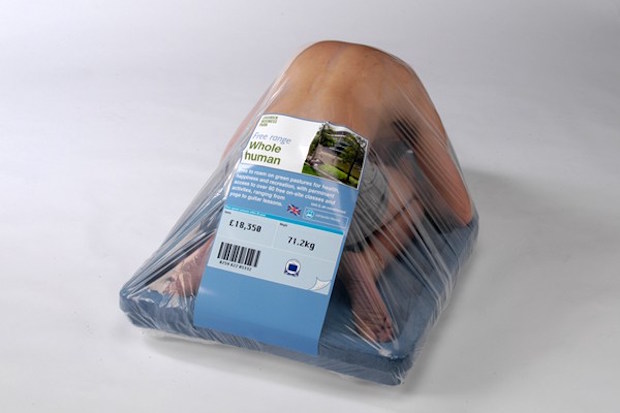 It’s virtually impossible to avoid interacting with packaging, even if it’s just picking up a cereal box to fill a breakfast bowl. Every day, out of sheer necessity, we have multiple interactions with packages and labels—they’re fundamental to the way that humans acquire and use the goods they consume.

But, what happens when interaction with packaging turns into identification with it? When the distinction between package and person starts to dissolve, what new forms emerge?

These strange coalescences do sometimes take place—and what they say about our relationships with packaging can be startling.

The most dramatic, not to say gruesome, example was a 2013 protest by animal-rights activists in Barcelona, Spain on the theme of “Meat Is Murder.” (Warning: the link will display extremely graphic NSFW images). The protesters tried to make the point by displaying their semi-nude bodies, smeared with fake blood, inside giant, plastic-wrapped supermarket packages.

Suddenly, packaging had become a disturbing if unwilling symbol of the destruction of some forms of life to feed and sustain other forms. Call it unfair, but acknowledge its visual and emotive power.

A design firm in the U.K. had something similar but less sanguinary in mind when it came up with this satirical specimen of “human packaging.” The message seems to be that if packaged consumer products can be commoditized, so can their end-users. But, the meaning of the body hunched inside the package may have more layers than just the one made of cellophane.

A packaging design student was less ambiguous when she skewered the Barbie-doll subculture by posing her sister as a “gothic lolita” inside a human-scale toy box. Medical packaging gets raked over the coals in this Pinterest gallery showing blood transfusion pouches that actually contain sports drinks.

Sometimes consumer-product packages really do contain human materials—consider these cartons, which are filled with 100% natural hair extensions. And while no one (we assume) would think of putting a real human bone inside a bottle of spirits like agave worm in tequila, the designer of the packaging for Spine Vodka flirted with the idea by inserting a miniature 3D model of a spinal column and its rib cage. Its eerie presence in the bottle is meant to convey the masculine strength that is associated (says the designer) with drinking vodka.

The first glimpses of what might be called “humanoid packaging” may be visible in emerging technologies that meld electronic components with human skin. This report from J. Walter Thompson Intelligence reviews a number of projects that print conductive circuitry directly onto skin for specific functional applications.

These include controlling smartphones, games, and music; monitoring health data; and even measuring blood alcohol content from sweat (DUI violators, beware). Uses like these effectively turn the body into a walking consumer electronic device that houses all of its own critical components—a fair definition of a certain kind of package.

The package-body connection is plain to see in the crossover of packaging imagery into the wearable human space. Garments such as this T-shirt depict what an appropriate label for the body and its contents might look like. Sometimes the packaging material crosses over along with the imagery, as it does in this series of McDonald’s-themed dresses created by fashion students at Miami International University of Art. Every one of the haute couture gowns is made of boxes, wrappers, and other packaging and serving components scavenged from the fast-food chain.

Packages often are embellished with QR codes to give consumers a channel to additional information about the products they contain. As reported by The New York Times, an advocate for patients’ rights turned the concept around by putting a QR code on her body as a portal to her medical records. She did it by tattooing a large 2D bar code onto her sternum, where medical professionals can scan it to instantly access her vital details. (She tells the full story here.)

It probably was inevitable that tattoos and brands would come together on the wide-open canvas of the human integument. One of the main functions of a package is to advertise its brand, and this is a role that many people seem happy to step into personally. They can’t resist decorating themselves with the logos and symbols of the branded products they’re loyal to. Aficionados of Harley-Davidson motorcycles, for example, are among the most prominent of these standard-bearers.

But, even the heavily inked (and sometimes literally heat-branded) H-D crowd pales before the spectacle of Jason George, a young Indian tattoo artist who is out to capture the world record for having the most brand tattoos. At the time this article was posted, his body was covered with 189 high-profile logos. He wants a total of 321.

There’s a deeply uncanny quality to our relationships with packaging that all of us would do well to take more seriously. We often tell ourselves to think outside the box, but putting that kind of distance between us and it may not be entirely possible. We are the box—and the box belongs to Pandora.