Recovery Indicators Have a Good Month

The spotty nature of the recovery continues.

By Dr. Joe Webb Published: June 3, 2015
The spotty nature of the recovery continues. In light of the negative GDP, prognosticators are looking for any data that can tell them the Q2 will be better, as the old rule of thumb about two negative quarters being a recession is in the back of their mind. That's not the true definition, but it's usually close enough. There are still plenty of important indicators that have not reached pre-recession highs of almost eight years ago, which shows how sluggish the economy has been. The recovery indicators had a pretty good month. (click chart to enlarge) 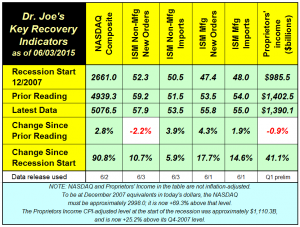 The NASDAQ was up almost 3% and three of the four index components we track from the ISM manufacturing and non-manufacturing surveys improving. Even the new orders index for non-manufacturing, which fell by more than -2%, is still at a level indicating growth. Inside the ISM reports were improvements in employment and signs of growing inflation, which we're sure the Fed was watching as they blow the dust off their old instructions about how to raise interest rates. Proprietors income was revised down from $1391.5 billion to $1390.1 billion, a minor change. The Atlanta Fed's GDPNow Q2 estimate is now +1.1%, as of this writing. This increase from the prior estimate of +0.8% is based on the release of import-export data for April. Their forecast is still well below the estimate of most economic forecasters. There's nothing in the recovery indicators to indicate a recession ahead, but we're still playing the old recording about a continuing sluggish and unsatisfying economy. # # #