US Commercial Printing Shipments Up for Eleventh Month

April 2015 US commercial printing shipments were up by + 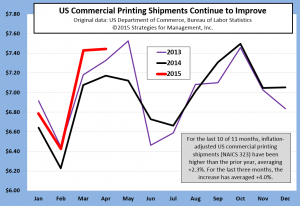 The 12-month-moving-totals, a way of annualizing shipments data, are running at $84.5 billion, up +2.7% in current dollars, and up +1.6% after adjusting for inflation. These are the highest 12-month totals in current dollars since 2009. Commercial printing shipments have had positive comparisons to the prior year in current dollars for 11 months. After inflation adjustment, postitive comparisons have been for 10 of 11 months. This was the best April since 2010. It was the best January to April period since 2011. The encouraging news continues. The industry has gone through a major restructuring and shifts in its product mix, and these are likely the residue of the exit of weak firms and the actions of stronger ones, more adept in the competition and integration of other media. Printers should use this time to continue to reposition their businesses as technological competitors continue to emerge, and existing ones continue to get faster, better, and less expensive. Next week the Commerce Department will release profits data and we will see how much of these revenues are falling to the bottom line. # # #