Recovery Indicators Mainly Flat, but Small Business Might be Having Problems

The recovery indicators were slightly better than last month,

By Dr. Joe Webb Published: May 5, 2015
The recovery indicators were slightly better than last month, but the main area of concern is the decline in proprietors' income. This indicator is one of the few that is reflective of the state of small business. There is newfound worry about the state of the economy because of the poor Q1 GDP report, just +0.2%. New data are being released that will be used to revise GDP on May 29. Those data indicate that Q1 GDP might be revised to be mildly negative. (click chart to enlarge) 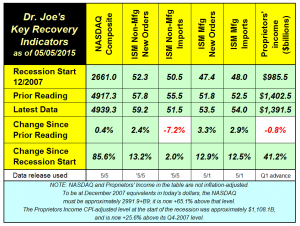 The Atlanta Fed's GDPNow forecast of Q2-2015 is already in process, and that estimate is at 0.8% (as this is being posted). It's very early to be looking at Q2, since only the first month of the quarter has passed, and actual data are still being calculated. The data in the GDPNow model at this time are practically "estimates of estimates," but the model has been very good these last months, so it deserves some consideration. Two quarters below +1% would create great economic concerns, but equity and bond markets may respond to the upside as consensus would believe that the Fed would continue to delay raising interest rates. Friday May 8 is the employment report for April. In light of the GDP report, it will get much attention. The ISM manufacturing report indicated a decline in employment, but the non-manufacturing report indicated a slight increase. It might be that the manufacturers are working down their inventories, hence a small reduction in employment there. Consensus expectations for the employment report are for an increase in payrolls in the high 100,000s and a 0.1 percentage point improvement in the unemployment rate. The rate has not been a good indicator of employment as the number of workers no longer in the workforce continues to rise, which is likely to be the case in Friday's report. # # #