By Dr. Joe Webb Published: March 18, 2015
For 2014, advertising agency revenues (+4.3%) and books and specialty publisher revenues +(3.2%) were bright spots amid the declines in periodical publisher revenues (-3.8%) and those of newspaper publishers (-6.3%). The chart below (click to enlarge) shows the long term trends. 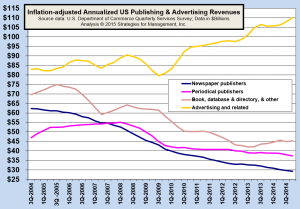 The data originate in the US Department of Commerce Quarterly Services Survey, and we have adjusted those data for inflation, creating 4-quarter moving totals of the revenues for each segment. The QSS began in 2002, and this is the highest level for advertising agency revenues since the survey that time. Newspaper publisher revenues set a new low, $29.3 billion, and are less than half the level when the QSS was initiated more than twelve years ago. For book and miscellaneous publishers, last year's growth was a rebound. Those publishers peak revenues were in 2005 (nearly $75 billion), and fell more than more than -$30 billion (-40%) by mid-2013, where they bottomed at $42 billion. Since reaching that bottom level, books and miscellaneous publishing revenues have had slow positive growth while newspapers and periodicals publishing revenues continue to decline, setting new lows. # # #