The rate of capital investment as a percentage of sales has increased steadily since the economic recovery began in 2009. 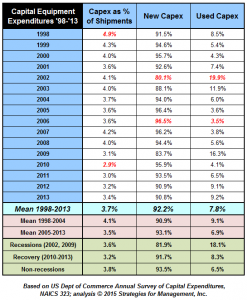 In recent years, used equipment investment has been a greater percentage than typical non-recession years. The used equipment market is often misunderstood, but is an essential part of the industry's effective use of capital. Capital investment decisions are not easy. Because even successful printers are capital-constrained by either low available funds, limitations on credit, or too many demands competing for limited available resources, the natural inclination is to investigate the availability of suitable used equipment first.  Every business has more uses for capital than it has access to capital (yes, even Apple and Exxon). Because most print businesses are small- and medium-size long-term, their capital investment is based more on revenue levels and short-term cash flow rather than long-term profits. There is another important factor. Tax policies encourage owners of closely-held businesses to minimize profits and adjust their wages, bonuses, pension contributions, and other surrogate payments to avoid the double-taxation of business profits. Therefore, because these businesses do not "save" in retained earnings but shift earnings to their owners, which contributes to the wealth of the owners. This maximizes the post-tax value of those earnings. This leaves small businesses capital-starved, and they often need to get investment resources shifted back. This occurs via personal loans to the business, or bank loans with personal guarantees to get the required funding. This creates a necessity for quick returns. Just like cash flow from rising revenues encourages new investments, it is the same cash flows on business results are judged. The immediacy of the cash flows become very important. There are very few print businesses who can tolerate multiple-year negative cash-flow startups for future postive returns that are many years away, no matter how substantial they might be. Printers tend to not use ROI in the textbook sense of the concept, but rather use payback period calculations, and often call that "ROI" in their conversations. I've had many conversations where I've asked "what's the ROI?" and was answered "18," to which I said "percent?" only to be told "no, months." Managing with an eye toward cash flow and tax management increases interest in leasing as a finance tool rather than lines of credit or specific financing, which are more common in larger companies. Indeed, when we have surveyed about the type of financing commonly used, small business choose leasing the most (especially for digital printing equipment) and large printers rely on general banking relationships. In our studies of capital investment, changes in sales levels, or the belief that there will be future positive changes in sales levels, are greater driver of capital investment than any other factor. We know that many print businesses are having increased sales today, and are looking for ways to invest in productive capabilities that broaden or change their product offerings. Those are where the most sales of new equipment are, such as wide format, and upcoming investments in high production multicolor ink jet printing. Used equipment expenditures are usually made on well-established processes, especially if it is believed that those processes will become obsolete. Higher rates of used equipment investment are more of a function of availability than anything else. Most print businesses always scan the used equipment markets for their capex initiatives, they do not always find what they need. Now we are at a time where there is a larger than usual supply of "young" used equipment. This increased supply is the equipment displaced because of consolidation through mergers and acquisitions where equipment is "cherry-picked" among the businesses, and the orphaning of equipment through bankruptcy and tuck-ins. Years ago, used equipment of great value would be sent to other countries, but now emerging market economies are very different, with higher growth rates and increasing wealth. This means that there is greater interest in new equipment, especially digital presses. Used offset presses no longer have this outlet, which depresses equipment prices overall. Expanding print businesses take advantage of younger equipment that often matches equipment on their pressroom floors they already own. This lets them integrate the equipment into their operations more smoothly, leveraging the experience of their current personnel rather than trying to replace it. * * * In terms of the history of capex investments, there was a time, such as 1998, when it was close to 5%; larger printers would often spend more than that. It fell to 2.9% in the aftermath of the last recession, and is slowly increasing. Another look at capex can be seen in the chart below where these percentages have been applied to inflation-adjusted industry shipments. (click chart to enlarge) 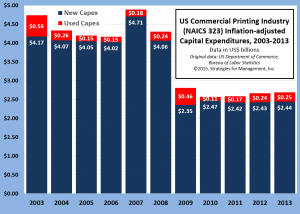 The bump up in 2007 is likely the expiration of leases in the late 1990s being replaced with different equipment. The late '90s was a relatively booming time for capex: at Print97 one of the press suppliers claimed show sales of $140 million. We know that wasn't really true, it was that deals under negotiation for months before had agreements like "let's shake on it now, and sign it at the show. we'll take a picture with a check, and go to a really expensive restaurant as a guest of our CEO" being signed on the show floor. But still, it was a booming time of great optimism. In the mid-2000s, printing shipments had their first fall from digital media, but had stabilized, with some owners believing the worst was done, and it was time to replace what they had. Then the combination of social media and the credit crisis hit, and many of those personally guaranteed loans evaporated and were defaulted or otherwise handled. The bulge in 2008 used equipment was displaced equipment finding new production floors as residence. Despite declining industry shipments since that time, capex purchases increased enough to stabilize the total industry investment. * * * Not all companies buy capital equipment on a planned and regular basis. The larger the business, the more likely they do. Smaller businesses usually have investments in one year, and may not make similar sized investments until years later. * * * The promise of new sales is a great motivator in the consideration of equipment investments. New sales is implies an opportunity for a businesses to change, to expand, attract new customers, and get more business from current ones. The industry's history has been that almost every new venture as been built on the back of a new technology, such as the shift from analog to digital prepress, for from hot lead typography to the broader market offered by phototypesetting. But that might not be the wisest investment. An overhaul of workflow, logistics, and inventory management might be smarter and more appropriate. Those internal costs are far less exciting. We always try to make emotional decisions like the big capital investment seem prudent. We comfort ourselves when we make our bets on the future seem reasoned, systematic, and quantitative. Used equipment availability is sometimes the residue of someone else's strategic mistake being used for a different company's strategic advantage. # # #