As long as The New York Times remains in print, it will print on a massive scale. This is exactly what takes place every evening at the paper’s main plant in College Point, Queens. 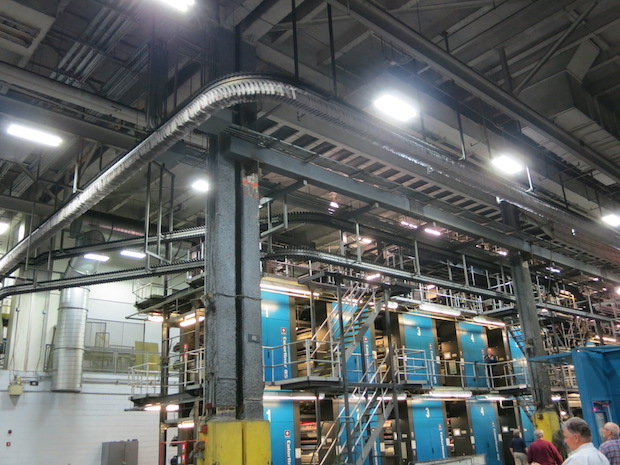 Nowhere else does the power of print look, sound, or feel more powerful than in a newspaper printing plant. At the pinnacle of that kind of power is the printing plant of The New York Times in College Point, NY, the site of a tour by the Mid-Hudson Club of Printing House Craftsmen on October 8.

This group usually meets in and around Newburgh, NY, but 10 of its members decided to come down to Queens to see for themselves how the newspaper with the nation’s third-largest daily circulation is manufactured. There they were guided through what has to be one of the most intensively mechanized environments on earth—an automated print factory that operates on the vast scale necessary to produce the bulk of the 625,951 copies the paper puts out during the week and the 1,476,385 copies it distributes on Sunday. (Numbers are averages for the three-month period ending March 21, 2015.)

Declines in traditional circulation have lowered the print profile of The New York Times in recent years, obliging its publishers to offset the shrinkage with more digital readership (there are now 957,000 paid digital subscribers). But, the print base is still formidable, and the visiting Craftsmen got a pressroom-to-mailroom close-up look at everything it takes to keep the broadsheet version coming without interruption to the doorsteps of the Gray Lady’s ink-on-paper loyalists.

Opened in 1997, the College Point plant is the sole producer of all copies circulated in the New York metropolitan area. As such, it represents a consolidation and a right-sizing of the paper’s operations in response to downward trends in circulation numbers and advertising volume. After more than 90 years of printing in Manhattan’s Times Square, the paper closed that plant in the same year the Queens facility came on stream. Satellite plants in Carlstadt, NJ, and Edison, NJ were eliminated in 1993 and 2008, respectively.

Although it’s the last plant standing in the paper’s primary circulation area, College Point isn’t the only print manufacturing site that The Times relies on. The paper also produces regional editions through a network of 26 contract printers, and its famous Sunday Magazine comes from R.R. Donnelley’s gravure plant in Lancaster, PA. But, the Queens operation remains the focal point of the paper’s commitment to print and the site of The New York Times Company’s heaviest investments in print production technology.

The jewels in the Gray Lady’s crown are six Goss Colorliner web offset presses. These house-sized coldset machines feed rolls of paper that weigh 2,100 lbs. each and contain 10 miles of printable surface. Robotic transports—driverless, remotely controlled forklifts—move the rolls from the paper storage area to pressroom, where five presses usually are in operation with one held in reserve. Two of the Colorliners have been upgraded with gatefold systems that enable them to produce four-page centerfolds or eight-page pullout sections as large as 48" x 22".

It takes four CTP lines to image the 3,000 plates that the pressroom may need for a single issue in a night of printing. Fourteen miles of overhead conveyors carry printed signatures to the mailroom for insertion and palletizing. When the issues are assembled and ready for distribution, a fleet of 127 trucks delivers them to retail outlets throughout the metropolitan region. (Third-party services cover home delivery.)

Data for nearly every manufacturing step that takes place is displayed in real time on a bank of large digital monitors in a command center. From here, supervisors can track an issue’s progress throughout the production sequence, spotting bottlenecks and taking corrective action as needed.

Everything at College Point is geared toward nonstop operation. All major systems are fully redundant, and the plant has natural gas-fired backup power generating capability. Production was interrupted here only once, and then only partially, during the great blackout that plunged the Northeast into darkness in 2003.

As imposing as it may be as a manufacturing center, the College Point plant also enjoys something of a side career as a location for films and television. During their visit, the Craftsmen were told that when moviegoers watched a shootout in a criminal drug laboratory in The Bourne Identity, what they actually were looking at was a set built in the plant’s delivery area. For the hit TV show 30 Rock, another space became a replica of an Ikea store.