70 Strong At Graph Expo, AlphaGraphics and Its Franchisees Look Forward to Better Times Under New Ownership

AlphaGraphics franchise owners came en masse to Graph Expo 2012, where Art Coley, the president of the network, briefed WhatTheyThink on steps taken to revitalize the business centers and the company as whole. 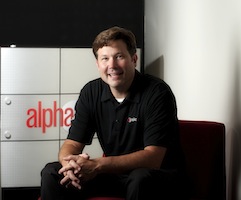 The AlphaGraphics chain of print and visual communications centers formerly was owned by G A Pindar & Son Ltd., a U.K.-based printing conglomerate that sold the franchising operation to Blackstreet Capital Partners II, a private equity fund, last January. Art Coley, a senior executive at AlphaGraphics since 2007, was named its president following the sale to Blackstreet.

Coley directs AlphaGraphics from its corporate offices in Salt Lake City, UT. Before joining AlphaGraphics, he was executive vice president of franchising for the International Center for Entrepreneurial Development (ICED), the owner of the Kwik Kopy chain and other franchise brands. Coley, who once owned and operated a direct mail firm, also counts among his formative experiences the time he spent running a Multilith 1250 offset press at a Minuteman store in the early 90s.

In September, AlphaGraphics announced a franchise-wide sales increase for the first six months of 2012. The following interview took place on October 9 at Graph Expo 2012 in Chicago.

WTT: AlphaGraphics has put many feet on the floor at McCormick Place this year. Please tell us how it happened.

AC: We have brought about 70 people to the show, including 60 franchisees representing 70 AlphaGraphics locations that together produce about $100 million in annual sales. All of the franchisees are paying their own way and making personal investments of their time to be here. This is my first Graph Expo, and frankly, I'm overwhelmed by the response. We probably have the largest single contingent of any group at the show.

WTT: What's the footprint of the AlphaGraphics network like today?

AC: AlphaGraphics now consists of 240 franchisees who operate nearly 300 AlphaGraphics business centers. Systemwide annual sales are about $300 million, back to where they were prior to the dip that the industry experienced in 2008-2009.

Our largest franchisee has five locations that together produce about $12 million in yearly sales. The biggest single producer is an AlphaGraphics business center that does $7 million annually. In 2102, 17 of our franchise owners made the "Top 100 List" from Quick Printing magazine.

The average AlphaGraphics location has annual sales of about $1.1 million with an EBITDA rate of 20%. In terms of sales per square foot and sales per employee, our franchisees' performance is industry leading.

WTT: AlphaGraphics ran into some tough times under its previous ownership. What has changed under new management?

AC: AlphaGraphics is one of 13 companies in the portfolio of Blackstreet Capital, which specializes in purchasing underperforming companies and turning them around. In the case of AlphaGraphics, there had been no growth since 2004, and profits were in decline. Our acquisition by Blackstreet stopped the bleeding and has enabled AlphaGraphics to regain its financial footing.

The franchisees' royalty rates, which are contractual, haven't changed. We know that ROI comes from helping the individual stores to increase their sales. The better they do, the better the return to corporate.

WTT: What steps have you taken to build sales and improve ROI?

AC: As a company, we're more focused on results and performance. We understand that at the business centers, it's not just about generating great ideas, but making a profit from them as well.

Over the last few years, we've been repositioning the AlphaGraphics brand by taking a closer look at the service offerings of our franchisees. Admittedly, we'd taken our eye off the ball of operational excellence, and that's one of the reasons why we're here at Graph Expo-to stay up to date with the latest trends in equipment, technology, and management.

We're doing more to support AlphaGraphics personnel at the store level. For example, we now have one full-time support person for every 20 to 25 stores. The ratio used to be one to 75. We've also expanded our help-desk support services in sales, marketing, and production. Soon, we'll offer franchisees the same kind of support in financial management.

AlphaGraphics business centers were early adopters of Web-to-print workflows. We're now working toward a systemwide solution that will let us integrate public and private storefronts with MIS.

WTT: How does one go about becoming an AlphaGraphics franchisee? What are the qualifications?

Making it as a franchisee in any line of business is always challenging, but the owners of AlphaGraphics business centers are the best in the industry. Between 80% and 90% of them have earned postgraduate degrees. Some have served as company CEOs. They're precisely the kind of people whom you want to have on board in a successful franchising enterprise.

WTT: You're surrounded by vendors here at Graph Expo. What kinds of relations does AlphaGraphics maintain with the technology suppliers?

AC: We held our first annual vendor summit in Salt Lake City in August with the participation of Xerox, Konica Minolta, EFI, and others. We want the vendor community to know that we need their input as we try to determine what will work best for the business centers.

AlphaGraphics franchisees are custom manufacturers. Although the equipment configuration is basically the same from store to store, it can be changed to meet individual requirements. We negotiate with the vendors so that franchisees can buy or lease equipment at favorable rates, and we have agreements covering paper and click charges as well. However, there is no centralized purchasing. Each franchisee makes his or her own arrangements for equipment and supplies.

WTT: We tend to think of AlphaGraphics shops as digital printing centers. Does offset lithography fit anywhere in the picture?

AC: In-house offset still accounts for about 20% of franchisee volume. Sometimes an existing printing company will enter the system as a way of breaking into digital production, either by setting up an AlphaGraphics store onsite or in a separate location. We're positioning franchises as good options for owners of offset shops who want to stop outsourcing their digital work.

WTT: What's the outlook for next year?

AC: The AlphaGraphics Network is very bullish about 2013. We believe it's our time to shine. We expect our system sales to exceed $300 million with double- digit growth. We see our business centers not only increasing the top line, but reducing operating costs from 3% to 5%.

That means $30,000 to $50,000 of extra cash in our franchisees' pockets. Marketing solutions to businesses across the US and other countries we serve will continue to grow as a percentage of our sales. 2013 is going to be a great year for AlphaGraphics.