Dark Clouds and Silver Linings: The Latest Economic Data May Be Gloomy...But Data are Not Destiny

This week, we’re going to take a step back from our look at the nuts and bolts of wide-format printing technology and look at the industry and the economy from “20,000 feet”—and hopefully not have a William Shatner-esque experience.

If you follow our Dr. Joe Webb, you know that the latest printing industry shipments—June—looked encouraging: 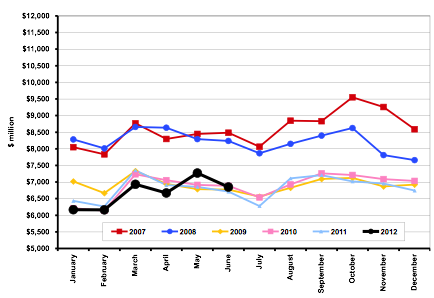 But let’s not forget to inflation-adjust: 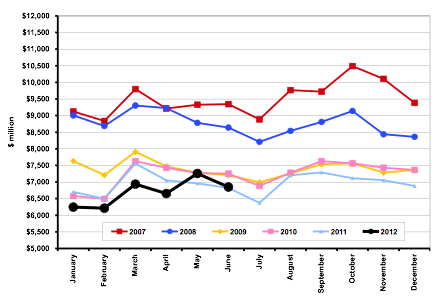 Looking at how the first half of the year has shaped up compared to the recent past, we see some good news and some bad news:

U.S. Commercial Printing Shipments for January to June 2007 to 2012 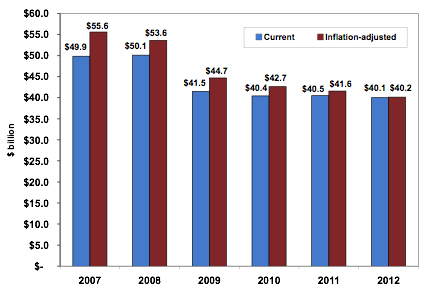 January-to-June shipments are down compared to previous years—but the decline is not as dramatic as previously. As Dr. Joe had commented in his newsletter and on his blog, there are some issues with the Commerce Department’s seasonal adjustment—the industry’s big month is now May and not March? Really?

Here is one of the limitations of this data series: digital printers, and wide-format shops, may not be included, depending upon how they classify their businesses. It has been often difficult to get a bead on decent digital print data, particularly from government sources. The Annual Survey of Manufactures (ASM) can get us a more granular look an what is happening in the industry and whilst the data are a couple years old, it still gives us some idea of what has been going on: 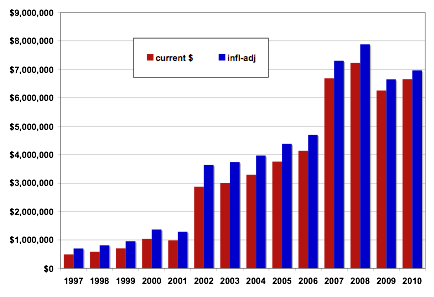 It’s difficult to get data specifically on wide-format, and likely the numbers are strewn amongst a variety of categories, be it digital printing, signage, advertising, and other end-use categories. (Remember, individual businesses categorize themselves on their tax forms, and they—or their accountants—may not consider themselves “commercial printers,” especially as more and more printers are encouraged to recast themselves as “marketing services providers.” Finding people in the wide-format market will involve concatenating a wide variety of end-use categories.)

The printing industry does not exist in a vacuum—unless they sent a wide-format printer to Mars with Curiosity (they didn’t, but they have been getting some great images which, at some point, could make some compelling wide-format prints)—and whilst the printing industry has not been without its own troubles, as everyone reading this likely already knows, everything that happens does so in the context of the overall economy. We don’t need to repeat the data here—our Economics and Research Center has been keeping its finger on the (oft-thready) pulse of the economy and how well the recovery is coming along—or not.

One of the top problems cited by small businesses (as the National Federation of Independent Businesses has repeatedly found in its monthly surveys of small businesses) is lack of demand from customers. In perilous economic times, when people are either out of work or fearful of being so, they are loath to spend money, which ripples throughout the economy.

We see this at the micro level in the printing industry: the number one problem facing the printing industry since 1999 has been declining demand for print. The difference, however, is that for our industry, the drop in demand has not necessarily been the result of people not having money, but rather due to competition from alternative electronic media (this is a very old story, but it never fails to surprise the extent to which a lot of folks still just don’t understand this). Wide-format printing has been one of the bright spots in our industry because many of its applications and products are not easily nor economically replaced by electronic alternatives. Yet.

Bucking the Trends—or Picking a Niche

While it’s true that today’s macroeconomic situation looks dire, we have to remember that the printing industry’s economic situation has been dire for more than a decade. But none of this is to say that there aren’t companies in and out of the printing industry that are doing well, even phenomenally well. Both macroeconomic and industry data are just averages; they are helpful for identifying overall trends, but companies often succeed in spite of those trends (and all data series have outliers). History has shown that while economic slumps tend to drag down businesses across the board on average, any business can buck the overall trend and, shall we say, find love in the time of cholera. As just one example, the graphic design market saw a resilience to the 1990–1991 recession, thanks largely to the advent and growth of desktop publishing in the late 1980s. By the time the recession hit in 1990, the “classic” applications for desktop publishing—PageMaker/QuarkXPress, Illustrator, and Photoshop—were starting to become widely adopted, facilitating the creation of entirely new businesses.

In my and Dr. Joe’s trilogy of books—Renewing the Printing Industry, Disrupting the Future, and Getting Business—we identify the factors that can help printing companies flout these prevailing conditions and succeed. And one of the things that struck me, looking back over our text, was how well-poised wide-format shops are to exploit these opportunities.

The biggest trend that we had identified in Disrupting the Future is that printing has become a series of niches. There is no “mainstream” printing any longer, certainly not in the same way that there was prior to the 1990s. The companies that are succeeding today have identified unique products and unique print applications—and, yes, products and applications that often incorporate some electronic media component. One caveat with regard to niches is to make sure that whatever niche is chosen remains viable. Markets change rapidly, and demand for certain products and applications can be ephemeral. Call it the flying fickle finger of fate, perhaps. “Carving out” a niche is important, but also understand that no niche is carved in stone. It’s good to develop certain skills and produce quality products, but one should make sure that they’re nimble enough to transition to a new niche should the old one wither.

Digital printing has been a great boon to these companies, as digital equipment can be readily upgraded or swapped out with newer equipment if it no longer produces what the market demands, unlike an offset press which can—and often does—stick around for decades. We refer to this as the “two lives” of printing equipment: its productive life (how long it physically lasts), and its marketing life (how long it produces what is in demand by the market), and the latter can often be much much shorter than the former. At the same time, new front ends can allow older equipment to produce new products. (See last week’s feature on RIPs.)

So digital equipment in general, and wide-format equipment in particular, by virtue of its ease of replacement and upgrading, can allow shops to become more nimble and switch product niches should they see an application or opportunity they’d like to seize onto. New wide-format printing technologies and capabilities are dramatically expanding the types of product niches that print providers can explore.

How do you start to identify these niches? Begin with your current customers. What ancillary print products do they produce, perhaps using another provider? What are the hot market trends and up-and-comingly hot wide-format print products? On WhatTheyThink’s Wide-Format News site, we report on these trends—our weekly features will identify some new and hot print product categories and the technologies that enable them. We will also be reporting from upcoming shows. Stay tuned.