Joe Davis of Consolidated Graphics is “Print CEO of the Year”

Joe Davis, CEO of Consolidated Graphics, has been named WhatTheyThink's Print CEO of the Year. 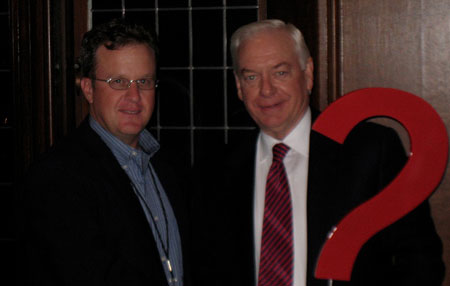 By a vote of his peers, Davis was acclaimed as the printing executive who most thoroughly embodies the qualifications established for the award, which are keynoted by inspirational leadership and business success. Davis was cited for creating and building Consolidated Graphics' network of 70 printing companies while maintaining a flat management structure, controlling costs, and making progressive use of technology.

In his acceptance remarks, Davis said that one of the achievements of which he is proudest is an internal leadership development program that has produced 23 of Consolidated's 70 company presidents. Consolidated actively recruits recent college graduates, regardless of degree, who demonstrate a history of success and the motivation for further accomplishment. Then, said Davis, "we try to teach them the printing business." This year, Consolidated hired 99 June graduates whom it has begun to groom for management positions.

Davis said that they will be taught the virtues necessary for success at every printing company: "being eager, aggressive, working hard, and servicing the customer better than the guy down the street."

Congratulations to all of the finalists for being chosen to compete for the title of Print CEO of the Year. Kudos to Joe Davis for winning the most impressive title.

Congratulations to all the finalists who competed for this title.

As an employee of CGX, its a sincere honor to work with Mr Davis and the great people who share his vision!

Joe definitely deserves this award. He follows his vision with a passion. He demands much and leads by example. He has outstanding technical and market expertise for a financially strong CEO.

Congratulations to Joe Davis! Certainly well deserved! His acceptance of this award was the apex of a great event. The PrintCEO Forum has become wonderfully valuable in a short tenure. I am looking forward to next year!