Printers Look on the Bright Side: Latest drupa Global Trends Report Sheds a Light on Print

A growth in optimism, increased planned investments, and operational challenges are some of the global print trends. European section editor Ralf Schlözer looks at some of highlights of the latest drupa Global Trends Report.

For a while now, the drupa organizers have been educating the printing community not only via their hallmark trade show but with expert insight articles and primary research reports. Now the 8th drupa Global Trends Report has been published, tracking key economic data and surveying printing companies and suppliers

The research partners of Messe Düsseldorf, Printfuture (UK), and Wissler & Partner (Switzerland) conducted the survey and authored this report, as they did the previous ones. Surveys were fielded in April and May 2022. About 500 recipients took part, with two-thirds being printing companies and the remainder being suppliers to the industry.

The report covers a number of topics including trends over time, financial performance, and investment plans. When the series started in 2014, the survey was centered purely on print. Over the years, the focus broadened to cover not directly print-related topics as well.

The 2022 report finds that printers are quite resilient in the face of many crises. Globally, in 2022, 34% of the printer panel stated their company’s current economic condition to be “good” and 16% described it as “poor,” yielding a net positive balance of +18%. The expectations for 2023 are even better, with a net balance of 27% of participants expecting good business.

Looking at specific regions, however, there are considerable differences. European printers expect their economic condition to worsen in 2023 as paper and energy issues persist and the general economy stalls. On the other hand, North American printers are bullish and expect good growth. Also, printers in Latin America, Africa, and Asia expect their conditions to improve noticeably in 2023, although with a smaller net positive balance. The authors caution against the data from North America and Africa somewhat, however, as only a small number of printers took part—a side effect of a cancelled drupa in 2020, resulting in a lack of recruitment opportunities.

The economic situation is mirrored in the capital expenditures data collected. Since 2019, capex has been falling steadily reaching a low in 2022. Trends were consistent across commercial, publishing, and packaging printers. For 2023, a rebound in investments is expected, however, potentially surpassing the capex in all previous years. This possibly points to some catch-up effects after years of lower spending.

Interestingly the authors of the report see sheetfed offset and not digital as the most popular type of planned investment for 2023—the only exception being flexo for packaging printers. It should be mentioned, however, that digital printer investment choices were spread across 10 different categories, which gives a single category naturally a lower share. Aggregated toner or inkjet would top the investment list for commercial or publishing printers. Only packaging printers plan to invest mainly in analog, with a moderate interest in rollfed color inkjet devices.

Investment plans are mirrored in the expected changes in print volumes by printing technology. Sheetfed offset volumes were reported to decline by commercial and publishing printers, who especially see color toner volumes growing. Commercial printers see also good growth in color roll-fed inkjet, while publishing printers are a bit more cautious. It might be the case that publishing printers also focus more on monochrome print (which is not listed in the chart). Interestingly, packaging printers have all processes showing volume growth, especially flexo print. 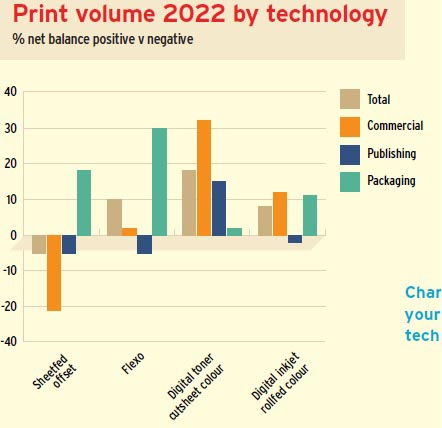 The last three years witnessed more economic upheaval than all the years before the pandemic struck, caused by huge fluctuations in demand and materials supply. A side effect of the spiralling costs printers are facing is that printers are now able to rise prices. Between 2013 and 2019, printers globally lowered prices—those that lowered prices outweighed those that raised prices by an average of 16%, despite the majority of companies seeing substrate price increases. After the pandemic-induced break, the 2022 data shows an unprecedented positive net balance of 61% in favor of those raising prices to those lowering prices. This should be seen on the background of a whopping 97% of printers suffering from paper/substrate price increases in 2022. As a result, margins remain under pressure, while utilization rates keep creeping up.

Apart from supply chain interruptions, the second strategic issue that was explored was labor shortages. The authors state that this is going to be a longer-term threat to the industry. The post-COVID situation exacerbated a problem that has been afflicting the industry. Globally, 41% of printers declared they had significant labor shortages in the last 12 months. The authors further stated that most regions were around that figure, although North America was up at 65% and Africa at just 14% (small data sets for both). Finishing staff (72%) and conventional press operators (59%) were the prime challenges globally. In response to these shortages, 35% reported they had increased wage/salary levels in the last 12 months and 33% expected to do so in the next 12 months.

The report confirms the rollercoaster ride the printing industry has been through in the last few years. The authors state that the print industry and the world as a whole has been through a very challenging period of over two years since the last survey was conducted in 2019. Their data shows that confidence peaked in 2016/17 and fell subsequently. But it is remarkable given the challenges of the last two years that confidence levels this year were a little higher than they were pre-COVID in 2019. The positive expectations printers have in most regions is based on the effects of the pandemic dwindling and supply chain issues being ironed out. Companies also realized that print proved to be resilient—as a basis not only for a rebound but for further growth. The exception is Europe where the war in Ukraine, skyrocketing energy prices, and a slowing economy are dampening expectations.

It seems that the industry is more in a spending mode again. Packaging remains in growth mode, while commercial and publishing printers have increased spending after two years of holding back. They are likely to seek for efficiencies and move into new market segments.

There are more data points on investment plans, strategic challenges, demand outlook, and socio-economic trends in the report. Also, some general economic background data is included. The full report is available from Messe Düsseldorf and costs €499 and is available in seven languages. It includes a number of charts and analyses, as well as comments from printers. A free executive summary can be downloaded as well. The next drupa takes place from May 28 to June 7, 2024, at the usual place in Düsseldorf/Germany, just over one and a half years from now.

Ralf Schlözer is a technology analyst for print with 30 years’ experience in the industry and a passion for discovering new technologies and print applications.

He is available for consulting and speaking engagements. Contact Ralf at [email protected]