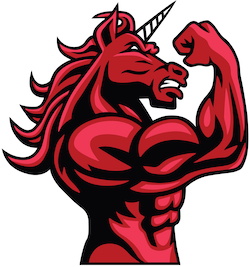 Print quantity of one, available anywhere, anytime, on anything. The vision of on-demand printing, personalized to each unique recipient, is no longer limited to paper. Digital print technologies have created opportunities to efficiently and cost-effectively customize and uniquely decorate the full range of products we use every day, including the clothes we wear. Charlotte, North Carolina-based Printful has combined digital printing on fabrics with robust fulfillment systems and white-label storefront software, all conceived and implemented for on-demand production and shipping on behalf of brands and designers on a global basis.

The eight-year-old company was positioned perfectly to take advantage of the uptick in online ordering over the past year during the pandemic lockdowns. Revenues in 2020 grew 80% over the prior year and exceeded $200 million. Private equity firm Bregal Sagemount, based in New York, took notice and invested $130 million for a non-control minority position in Printful. While the exact proportion of the equity acquired was not disclosed, the founder of the company was rightfully proud to announce that the investment implies that the total enterprise value exceeds $1 billion, achieving “unicorn” status for the on-demand clothing and promotional items printing company.

This is not the first investment in digital printing for the Bregal global family of investment funds. The German arm, Bregal Unternehmerkapital, acquired the commercial printing company OnlinePrinters in 2016. Operating throughout Europe, the company produces primarily paper-based printed products, ordered via several branded online websites throughout the EU countries. Bregal was the second institutional investor in OnlinePrinters which was founded in 2004 and had grown to 600 employees under the prior ownership of PE firm TA Associates. With the guidance and financial support of Bregal, OnlinePrinters has now more than doubled in size, with more than 1,400 employees and a fleet of almost 200 printing units, including Heidelberg offset and HP digital presses. We expect that Bregal’s New York team is planning for Printful to follow a similar trajectory, carving out increasing share in the growing market for digitally printed custom apparel.

Commercial printed communications and informational printing (such as newspapers) have been hit hard over the past year. The conversion to online communications accelerated as a matter of necessity in lockdown. Companies such as Printful know that while we may not need printed brochures or newspapers in the future, almost everything else will still be printed and decorated. As we wrote about several years ago, companies such as EFI and others were not waiting around hoping that paper will remain dominant; forward-looking print-centric equipment manufacturers were aggressively acquiring innovative companies that had adopted digital printing technologies to fabrics (see the Target Report: EFI Walks the Digital Fashion Runway—July 2015). The future of print will increasingly be individually customized with the images we want, delivered wherever we want, printed on demand when we want, and applied to whatever products we choose. 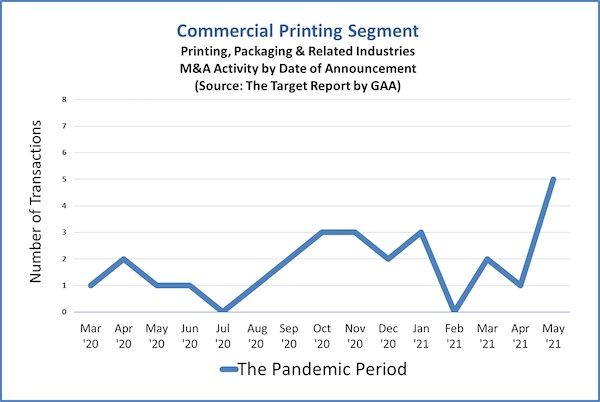 Prisma, the Phoenix, Arizona-based printing and marketing production services company, announced a duet transaction in Music City USA, with the simultaneous acquisition of Parris Printing and TruColor Litho. The two companies have been rebranded as Prisma Nashville. TruColor Litho moved into the Parris Printing facility and plans have already been announced to establish a new permanent Nashville campus for the combined companies in early 2022.

Thysse, located in Oregon, Wisconsin, which promotes itself as a design, printing, specialty graphics, and manufacturing company, purchased the Badger Group located in nearby Fort Atkinson. The acquired company brings a tradition of direct mail and commercial printing expertise and has been tucked into the Thysse location. Effectively bracketing the pandemic period with bookend acquisitions, Thysse announced its last acquisition, the purchase of wide format printing company Sign Edge, during the first week of March 2020.

All Service Graphics, a printing and mailing company located on the space coast in Florida, was acquired by Orlando-based Superior Press.* The transaction was a reverse tuck-in; Superior Press had outgrown its facility and moved its operations into the acquired company’s production facility. Superior Press plans to continue to grow, utilizing the acquired ready-made larger plant, with the bonus of an acquired customer base. The sellers, who own the facility, will eventually completely exit operational responsibilities, but retain the real estate assets now leased to Superior.

Heeter, a commercial printing company that has successfully transitioned to a comprehensive marketing services production company with expertise in direct mail, has acquired commercial printing company Duke Print & Mail. Heeter, located just outside of Pittsburgh, Pennsylvania, has announced that it will maintain the Duke brand and operations in Cleveland, Ohio. Heeter has joined a number of other printing companies strategically acquiring and operating satellite production facilities, consistent with the trend we have noted over the past couple years. This is in contrast to the wave of national roll-ups of yore (see The Target Report: Commercial Printing: Consolidation or Regional Expansion? November 2019).

In contrast to M&A activity in the commercial printing segment, deals in packaging have continued at a steady average pace of 3.9 transactions per month during the pandemic period, exceeding the pre-pandemic average of 3.3 transactions announced per month over the prior four years. Despite the anomalous dip in February 2021, all indications are that the packaging segments, especially labels and flexible packaging, will remain red hot, and folding carton manufacturers will increasingly receive more attention. 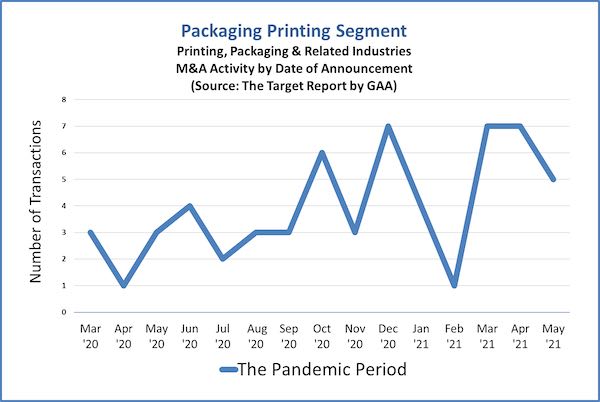 PPC Flexible Packaging, a portfolio company of Morgan Stanley Capital, announced its second deal during the pandemic period, acquiring Target Labels & Packaging in North Salt Lake, Utah. The acquired company adds to PPC’s presence in the western US, and produces flexo and digitally printed labels, rollstock, and pouches for nutraceutical, snack, confectionary, and specialty consumer product markets. PPC’s other deal during the lockdown was the purchase of Custom Poly Bag in December, one of the transactions we noted as indicative of the resurgence of interest in the manufacturing of the simple bag (see The Target Report: Bags, Pouches, Trays & Bowls—December 2020).

Novolex wrapped up an agreement to acquire Flexo Converters USA, a manufacturer of paper bags and sacks headquartered in Meriden, Connecticut with an additional plant in Monroe, Georgia. Novolex, with financial backing of the Carlyle Group, now has 55 manufacturing plants and more than 10,000 employees. The company operates its own plastic recycling centers but has noted that this latest acquisition is in response to an increase in consumer demand for paper bags.

* Graphic Arts Advisors, publisher of The Target Report, served as exclusive advisors to All Service Graphics in this transaction. 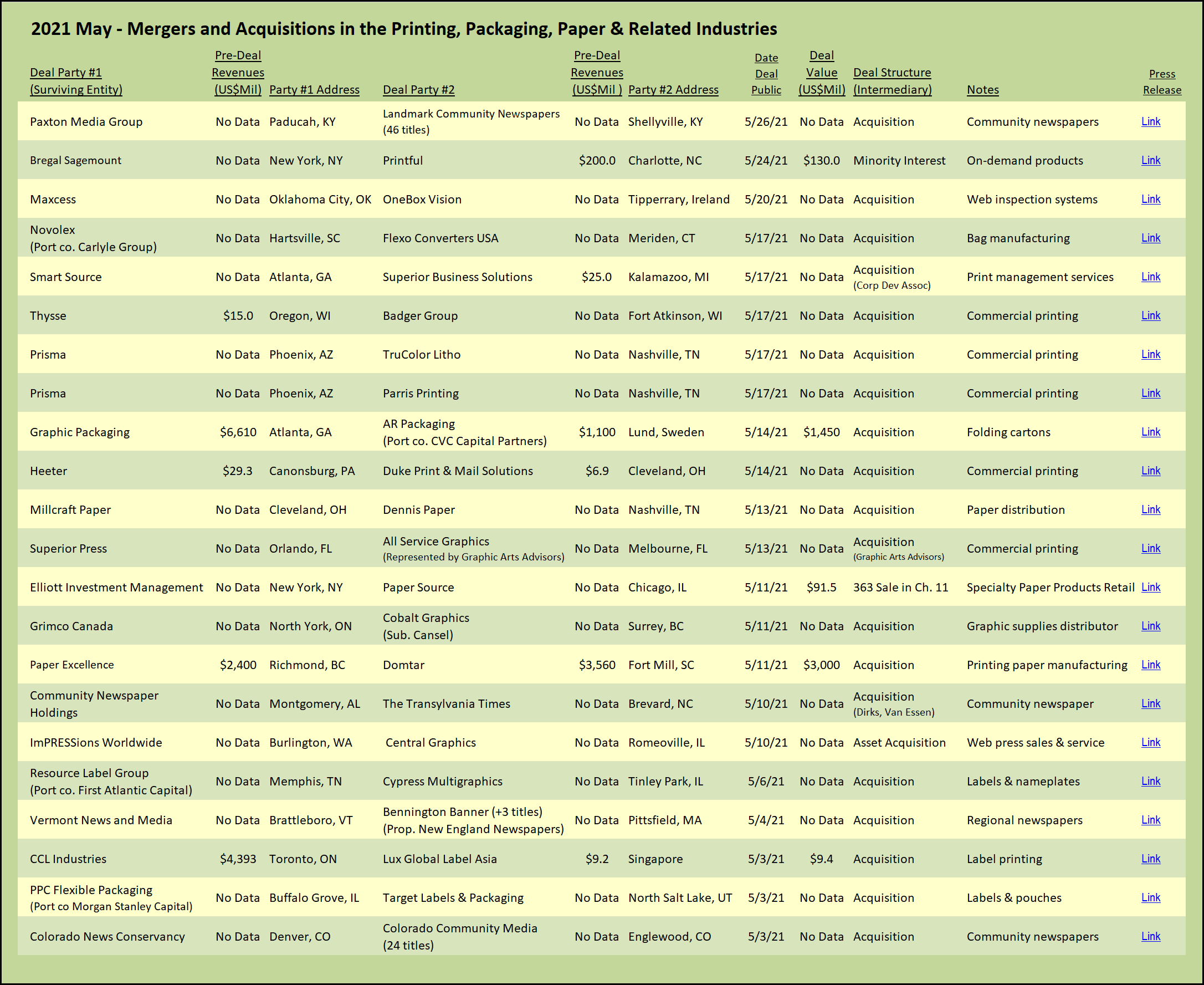 View The Target Report online, complete with deal logs and source links for May 2021