In development even before COVID-19 hit, InfoLnkX by SpeedPro is an NFC-based chip that can be programmed to deliver digital, contactless menus to patrons’ phones right from restaurant signage or table decals. But the uses for InfoLnkX go far beyond restaurant applications.

A few weeks, ago, I offered some tips for how sign and display graphics providers can help restaurants with the various print materials that are needed for them to reopen safely. I had mentioned that single-use menus are one particular option, but could very well be a sustainability nightmare. However, sign and display graphics franchise SpeedPro has just rolled out a new product called InfoLnkX that makes that a moot point. Based on near-field communication (NFC), SpeedPro’s InfoLnkX comprises a programmable chip attached to a restaurant’s interior or exterior graphics that can allow patrons to access the restaurant’s menu right from their phones—without having to handle germy multi-use menus or generate excess waste via single-use menus.

Interestingly, InfoLnkX had been in development well before the COVID-19 crisis. “In March 2019, we were trying to, not necessarily predict, but understand where we think the printing industry is going over the next five and 10 years,” says Larry Oberly, President and CEO of SpeedPro. “We started with basically 500 ideas on the table and narrowed it down to a top 10, then a top five.” Working with an “intentional innovation company” called EdgeDweller, SpeedPro started looking into smart signage, although the idea was eventually tabled—for a time. “We decided to go forward with a couple other initiatives,” says Oberly, “and then COVID hit, so we decided to go back and look at our top five again. The smart signage opportunity was right there in front of us with the need to be safe and prove safety, so we thought it was a perfect application.” They started working on it in earnest in mid-March, 2020, and it took SpeedPro about two months to build marketing materials and a strategy behind offering it to clients.

That “perfect application” is what SpeedPro is calling InfoLnkX. It’s not a proprietary technology; NFC has been around for a while, and SpeedPro had also looked at using QR codes. “We like the NFC option a lot better because it’s becoming more and more inherent in phones and you don’t have to open an app,” says Oberly. “It actually has a few more capabilities, especially from a security point of view. It also has the same longevity as a QR code.”

There are a seemingly infinite number of ways that that InfoLnkX can be implemented, but as SpeedPro rolls it out, contact-less menus for restaurants is the initial “killer app.” InfoLnkX works in conjunction with other kinds of signage and applied graphics. The InfoLnkX chip can be applied to a poster outside the restaurant’s door, so patrons can download a menu to their phones as they are waiting to be seated, or even carried through inside the restaurant to a decal applied to a table or some other kind of interior signage or display graphics. 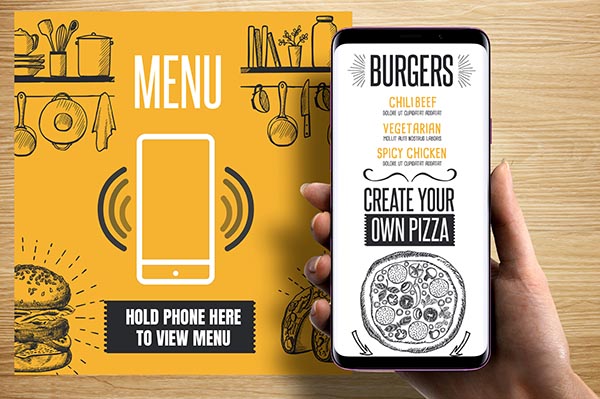 “You can not only pop up a menu, but also pop up an order form, which will allow a credit card payment,” says Oberly. 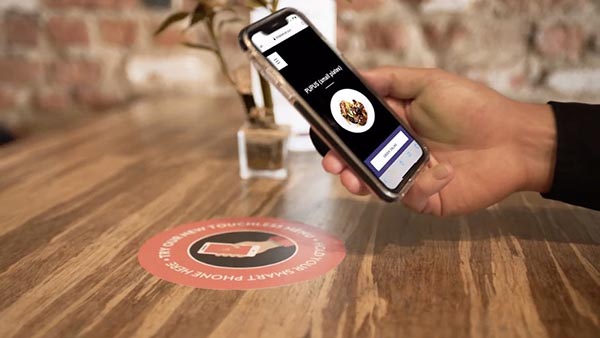 As with any kind of interactive print, instructions for use have to be provided, which lends itself for other kinds of ancillary and surrounding graphics, especially to keep all imagery on-brand.

The recent “premature reopening” of restaurants and other locations in places like Texas and Florida—and the subsequent re-closing as infection rates rose again—is starting to focus even more attention on how people can go out in public and stay safe. Oberly believes InfoLnkX can play a large role in that. “I think it’s going to force companies to really rethink how they can prove that their clients are going to be in a safe environment,” he says. “And I think [InfoLnkX] is one of those things right now that allows them to do that and rethink their business strategy and how to keep people separated.”

Most of the SpeedPro studios in the US now have InfoLnkX chips in stock, with those in Canada soon to be on board, and the technology is ready to go. “We did some initial tests in a couple of local Denver restaurants,” says Oberly, “and many of our studios have already put them in other restaurants.”

And not just in restaurants.

Adam Koppelman is the owner of SpeedPro Services Group in Totowa, N.J. The studio has been around for seven years, but Koppelman bought the franchise in 2018. He has seized on InfoLnkX and has been actively pushing it in his local market. “This is so huge and such a good opportunity for SpeedPro,” says Koppelman. “I made up a whole bunch of standardized generic pieces that don’t have to be branded, but they can be for specific restaurants if they want something customized.” Koppelman then went on Amazon and bought acrylic tabletop folders for them. “With all these samples, I’m going to go door to door,” he says. “I’m going old-school. I’m going to literally start knocking on restaurant doors, talking to managers and owners and saying, ‘Hey, this is what I’ve got. I’ve got some generic pieces, and I can program them right here on the spot for you.’ I’m excited about the opportunity.” 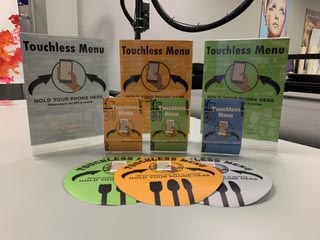 So excited was Koppelman about the InfoLnkX concept that he didn’t even wait for the official branded chips to come from SpeedPro corporate. “I went online and found some of my own,” he says. “I wanted to just jump in and see what works, how it works, and what can we do with it.”

One of Koppelman’s initial test subjects was a restaurant called Southbound BBQ in Chestnut Ridge, N.Y., for whom Koppelman did some tabletop graphics and a digital menu, which, when the owner was interviewed by CNBC, was caught in a panning shot. “My digital menu was on screen, so I can now say ‘as seen on CNBC.’”

Koppelman quickly discovered that the applications for InfoLnkX go far beyond restaurants. “I'm talking to some churches and synagogues,” he says. “Effective July 2 [in New Jersey], you’re allowed to have some smaller gatherings of services inside, so my thought was, if they have a digital version of their prayer book, why can’t we, when people come in, have them wave their phone and have it launch their prayers so they don’t have to touch the community prayerbook. I’m talking to a couple of religious places now for that.”

Koppelman has also been talking with corporate clients about integrating InfoLnkX into their interior office space décor—for example, companies and organizations that have a graphic timeline of milestones can transfer that from a wall or window graphic to something sent to a phone via InfoLnkX. “The plan is to embed certain dates in the chips and program them as an interactive wall where people can come up to it and get more information about what was happening in the history of the company at that time, or see a video about the groundbreaking ceremony,” Koppelman says.

Perhaps the most unique application for InfoLnkX is on vehicle graphics. “I am putting it on a vehicle wrap for a customer,” he says. “Their clothing store is in a mall, and they’re not sure how long it’s going to be until they can open up on a full-time basis. They got a great deal from Mercedes and bought a Sprinter van, and they are customizing the interior into a mobile boutique, and we’re going to do a whole exterior wrap for them.” Part of the wrap will include InfoLnkX-based touchpoints that let customers like them on Facebook or Instagram, as well as access an online store with real-time inventory.

“So it’s kind of cool,” he says. “We’re pushing the boundaries and testing the limits of the technology, but clients are coming up with creative ideas to help it fit their businesses.”

The real value proposition isn’t necessarily in just the InfoLnkX chips. “It's an inexpensive non-proprietary technology,” says Koppelman. “Anybody can do it, but I’m marrying it up with the signage, making it turnkey for clients, and trying to keep it reasonably priced because these restaurants are hurting.” It also leads to other kinds of signage or display graphics they may need—especially as indoor dining remains verboten, at least in Jersey, for the moment. “Do they need any branded tents that they can put outside?” says Koppelman. “Do they need a big banner to announce that they’re open? Maybe the foot in the door is this unique technology that I’ve made simple and easy for them.”

“There are a lot of different applications for InfoLnkX for just about any industry,” says Oberly. “Like museums and galleries, for instance, where they could drive an audio file and do away with the rentable temporary headsets.” Indeed—how appealing are thosegoing to be when museums can open up again? “We see lots of applications in education, as well. There are certainly a lot of things that the universities can do to continue to provide that separation and safety with something like a series of graphics with chips and QR codes embedded that can also help deliver all kinds of messages.” 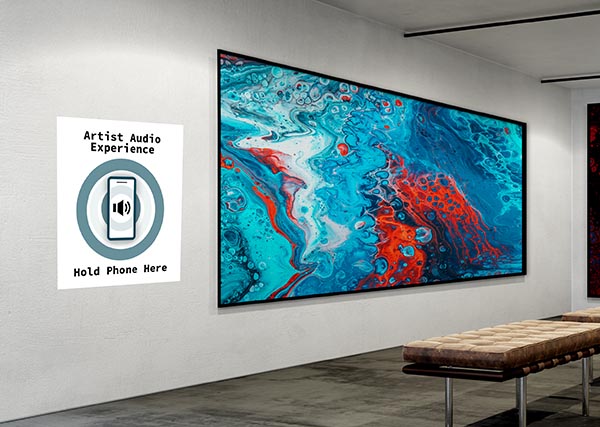 “You’ve got to be aggressive to stay alive these days,” says Koppelman, “and I’m happy to say, we had a record month in June, and we had a record month before that in May and that’s because we’re pivoting. With the help that SpeedPro is giving us with different tools and ideas like this, we can stay relevant, and stay ahead of the competition and offer different services to our customers.” 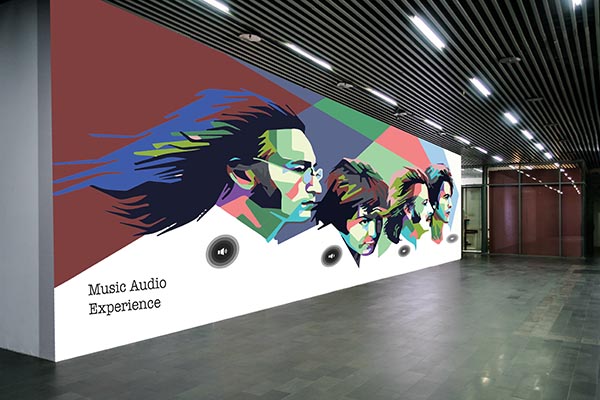