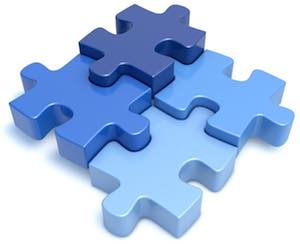 Graphic Village, based in Cincinnati, Ohio, has added another distinctly different avenue to its diverse community of companies with the acquisition of DMS ink. Formerly known as Dayton Mailing Services, the acquired company brings high-volume personalized direct mail capabilities to the regional consolidator of print-related companies.

With the strategic vision of a multi-prong diversified graphic services provider firmly baked into its DNA, the series of acquisitions have not only built on the company’s core commercial printing services, but also branched out into marketing services and folding carton manufacturing. The purchase of direct mail provider DMS ink brings data management, high-speed inkjet personalization, mail preparation, and postal optimization into the Graphic Village family. High-volume direct mail services are traditionally not the typical playing field for a commercial printing company, and we suspect that the acquisition is likely to bring the Graphic Village group into competition with an entirely new league of players. The highly diverse strategy is in sharp contrast to that of other consolidators that are serial acquirers of similar building blocks, adding to their strength in one clearly defined core competency (see The Target Report: Catching the Wave in Corrugated Cartons, February 2020).

The acquisition of DMS ink, 60 miles from the company’s home base in Cincinnati, represents another leap of a different sort for Graphic Village. The prior acquisitions have notably all been located within a few miles, close by, just over the Ohio River in Kentucky, or in Cincinnati itself. In this regard, Graphic Village is part of a growing trend we have noted, that of the regional consolidator building out a network of complementary locations within a distinct geographic region or corridor (seeThe Target Report: Commercial Printing: Consolidation or Regional Expansion? November 2019). 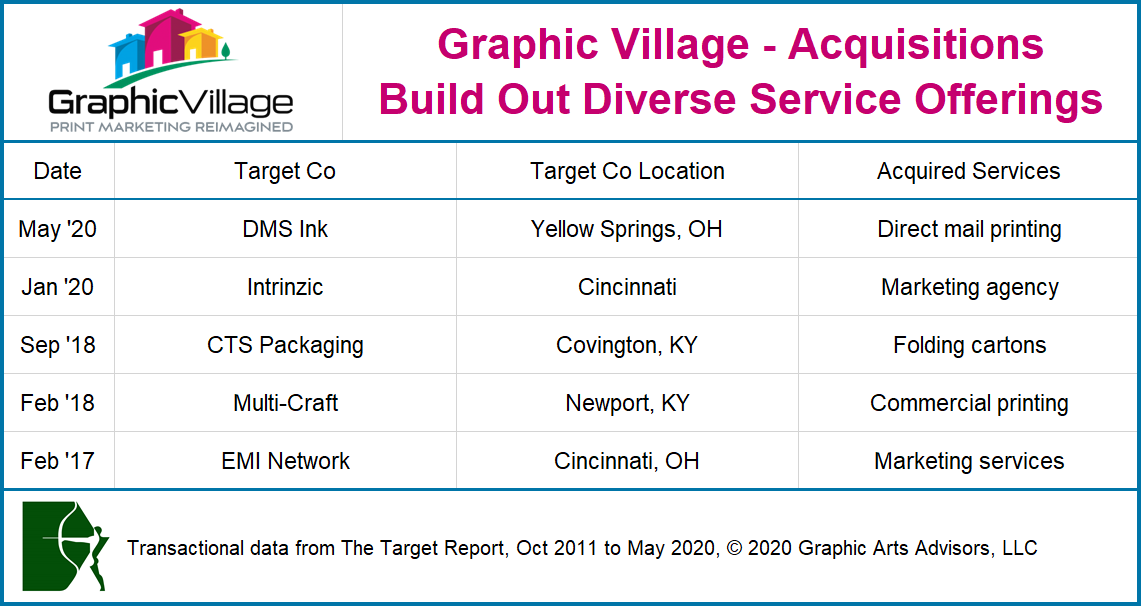 The Croydon facility was formerly known as Gilbreth Packaging Solutions, an innovator in shrink sleeve technology. The company’s engineers solved the distortion problems when shrinking films onto “full body” shaped packages and helped pioneer the now ubiquitous shrink sleeve labels market over 40 years ago. Gilbreth also was one of the first companies to introduce gravure printing on shrink film. The Gilbreth name disappeared almost ten years ago when Cenveo acquired the company in its now aborted foray into the packaging business (see The Target Report: The De-Evolution of Cenveo, April 2019).

Numerous newspapers and magazines appear to be early casualties of the COVID-19 crisis which is hitting the struggling publishing industry. Outlook Newspapers, a small operation in La Cañada, Calif., purchased three local newspapers, including the Burbank Leader, from the Los Angeles Times. The parent company had announced that publication of the three papers was scheduled to cease, reportedly due to the economic decline brought on by the outbreak of the coronavirus. The buyer, Outlook Newspapers, has announced plans to continue publication of the titles.

Nordstar Capital, a private equity company apparently formed for the sole purpose of buying Torstar, the publicly held owner of metro newspaper the Toronto Star, has announced an offer to take the company private in a deal valued at $38.7 million ($US). The company has reported dismal financial results. With a negative EBITDA, a multiple is a meaningless metric. Looked at a different way, the price offered represents just 11.4% of revenue, based on reported trailing twelve month revenues of $339 million ($US).

Forum Communications, based in Fargo, N.D., has announced the closing of two Minnesota local papers published by the company’s RiverTown Multimedia subsidiary. The Minneapolis StarTribune reported that six other local newspapers were all shutting down by the first week of May or had already ceased publication in April. The falloff in advertising due to the coronavirus was cited as the proximate cause.

Jostens, owned by the multi-billion dollar Platinum Equity private equity fund, announced the permanent closing of its yearbook publishing and printing facility in Visalia, Calif. The company noted that its products were highly cyclical and tied to high school and college graduation events. With schools closed across the country, the company has experienced an unexpected loss and decided to shutter the plant permanently.

We found only one bankruptcy filing in May, the Chapter 7 liquidation filing of Scheffer Printing, a small commercial printing company in Charleston, Mo. It appears that the larger multi-plant companies are reacting quickly to the decline in business, closing facilities to rationalize capacity, able to shift work to remaining plants. Smaller companies are hanging on, at least for now, not having the option to move work to alternative facilities. With the economy “opening up” just as the initial PPP loans are hitting the original eight-week deadline to spend-and-be-forgiven, the fate of many small and midsize printing companies may hang in the balance.

View The Target Report online, complete with deal logs and source links for May 2020.