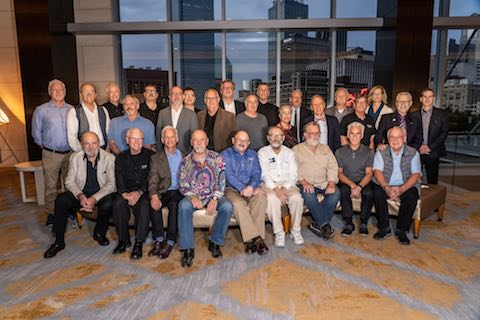 Members of The Academy of Screen and Digital Printing Technologies (ASDPT).

Established in 1973 by the Specialty Graphic Imaging Association (SGIA) Board of Directors, ASDPT is an international organization of expert printers, suppliers and educators who have made significant contributions to the growth of the screen and digital printing industries. Each year, the Academy accepts nominations for new members who have demonstrated an industry commitment through their work and/or educational efforts. Inductees must be officially recommended by at least two current members to be considered.

“Induction into the Academy not only represents recognition of past contributions to our industry, but it also considers how that individual continues to contribute to the overall growth and direction of our industry sector,” said ASDPT Chair Charlie Tabulieb of Taublieb Consulting. “Academy members are active in the industry, providing and sharing their technical expertise on a daily basis.”

SGIA congratulates Dobie and this year’s ASDPT inductees, who were also celebrated with a special awards dinner following the October 24 induction.

Mark Gervais, Ningbo Shenzhou Knitting
With 42 years of screen printing experience, Gervais started his career as a printed circuit screen printer and manufacturer. He has worked at Fortune Fashions and spent the last decade as Ningbo Shenzhou Knitting’s Director of Screen Print, designing, engineering and creating massive screen printing operations while working with brands to deliver remarkable screen prints. He is a multiple SGIA Golden Image (formerly Golden Squeegee) Award recipient and was inducted in FESPA’s Hall of Fame in 2015. Gervais has conducted over 25 screen print training seminars, presented at several industry conferences and contributed to Screen Printing magazine.

Brian Hoag, Roseville Area High School
Of his 34 years as an educator, Hoag has spent 28 teaching over 20,000 students in the Roseville Area High School Media Arts program. In this time, he also started ProSign, a vehicle graphics company, but sold it in 2000 to focus exclusively on education. Through industry partnerships and starting Raider Grafix — Roseville’s student-run print shop — he has continued to expand his program, which will occupy a 12,000-square-foot space by fall 2021. In addition to facilitating student internships, Hoag has offered his services, curriculums and support materials to help build similar programs across the country.

Beppe Quaglia, Quaglia srl/VIRUS Inks
Quaglia has devoted 47 years to the apparel decoration industry, starting his career as a graphic designer and screen printing operator before moving on to own screen printing company TIMS Serigrafia just two years later. He then founded Quaglia Pubblicita/Elabora, which eventually merged as Quaglia srl, a technology supplier and consulting/training organization for screen printers which has worked with companies such as M&R, Nazdar and PolyOne Wilflex. After much research and development, his company VIRUS Inks launched in 2007 to continue delivering the next generation of eco-friendly inks for the industry, including the wet-on-wet (WOW®) ink.

“Congratulations to Mark, Brian and Beppe, who represent important sectors of our industry – education, chemical manufacturing and printing! We look forward to working with our three newest members to push the envelope and drive our industry forward,” added Taublieb.

Academy members are active in providing technical education, consultation, adjudication of printing image quality, and promotion of the technical and commercial development of the industry. For more information about the organization, visit sgia.org/about/academy.