Cambridge, UK – Biobased polymers are gaining increased prominence in the minds of consumers, as increased awareness of climate change and plastic pollution continues to grow. However, the range of biobased alternatives to the main plastics we encounter in our daily lives continues to limit its potential adoption. Key to accelerating the switch from petrochemical to biobased plastics is going to be a larger diversity of materials, including commodity polyolefins such as polypropylene and polyethylene. IDTechEx looks at the key manufacturers of biobased polymers and production methods and capacities, in their report, “Biobased Polymers 2018-2023: A Technology and Market Perspective”.

This venture leverages Neste’s experience in renewable hydrocarbons derived from sustainable biobased raw materials, as well as LyondellBasell’s technical capabilities in large scale chemical production. An initial production run has successfully resulted in the production of several thousand tonnes approved for use in food packaging. The polymer itself is marketed under the brand name Circulen, and has been added to LyondellBasell’s circular economy product line. An independent third party tested the polymer products using carbon tracers and confirmed they contained over 30% renewable content. 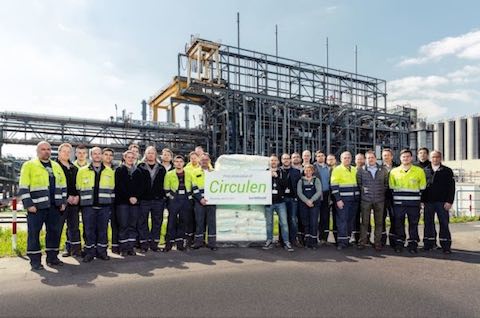 "LyondellBasell has an innovative spirit that spans decades, and an achievement like this showcases concrete actions we are taking in support of a circular economy," said Richard Roudeix, LyondellBasell Senior Vice President of Olefins and Polyolefins for Europe, Asia and International. "Through the use of renewable resources, we are contributing to the fight against climate change and helping our customers achieve their environmental targets."

"We are excited to enable the plastics industry to introduce more bio-based material into its offering. It is very satisfying to see Neste's renewable hydrocarbons performing perfectly in a commercial scale production of bio-based polymers, providing a drop-in replacement option to fossil materials," said Neste's President and CEO Peter Vanacker. "This pioneering collaboration with LyondellBasell marks a major milestone in the commercialization of Neste's renewable polymers and chemicals business focusing on developing renewable and circular solutions for forward-looking sustainable brands."

In Q3 2018, Neste partnered with Ikea to pilot commercial-scale production of biobased polypropylene to help Ikea realise its goal of fully substituting the plastics used in its products with recycled or renewable materials by 2030.

To date, technological advancements in biobased polymers have focussed on developing either drop in replacements or indirect substitutes of polyesters and polyamides; largely in part a result of metabolites that are currently readily produced by microorganisms. Propene and ethene, the monomers used to create polypropylene and polyethylene, are not common metabolites produced by microorganisms, but can instead be synthesised from sugar cane fermented to produce ethanol. Although few companies have engaged with developing biobased polyolefins, they are in considerable demand as packaging alternatives for food, drinks and cosmetics. The joint venture between Neste and LyondellBasell places them at the forefront of biobased polymer innovation, helping to create a more sustainable alternative to petrochemically derived commodity polymers.

With the industrial production of biobased polypropylene, IDTechEx projects that the market size for biobased polymers will be 2.7 Mt by 2023. Biobased polyolefins look set to benefit from a CAGR three to four times as large as their petrochemical equivalents, as consumers increasingly become aware of the benefits of using biobased alternatives.

Understand the latest trends in Green Technology with IDTechEx; find out more about biobased polymers with our report “Biobased Polymers 2018-2023: A Technology and Market Perspective”.