The selected bold style of contemporary artist and graphic designer Ian Kirkpatrick (www.iankirkpatrick.ca) would serve in sharp contrast to the Victorian neo-Gothic architectural design of the museum founded in 1860 in Oxford, England.
Kirkpatrick is a Canadian artist originally from Vancouver, British Columbia, who moved to England with his wife in 2007. He works from a studio in Leeds supported by East Street Arts.

In a website statement, Kirkpatrick describes his work as “inspired by the history of art and design, from ancient cave art and Greek amphorae, to graffiti and computer graphics. The hieroglyphic surfaces of his 2D and sculptural pieces remix iconographies from past and present cultures, often in response to current political and social themes.”

Kirkpatrick creates most of his work digitally and then manufactures it out of industrial materials including: stainless steel, vinyl, corrugated cardboard, cast acrylic sheet and Dibond® aluminum composite material (www.3acompositesusa.com).

He chose Dibond graphic display board to create a series of six panels entitled: “Where Do We Come From? What Are We? Where Are We Going?” The panels were installed in conjunction with the museum’s “Settlers” exhibition, which was displayed from Feb. 9, 2018, through Sept. 9, 2018.

(Dibond is an aluminum composite material consisting of two pre-painted sheets of 0.012-inch aluminum bonded to a solid polyethylene core – a unique composition that makes it approximately one-half the weight of aluminum. As the flattest panel on the market, Dibond offers a superior surface for direct digital-printing; it also can be routed and returned to add dimension or roll-formed to deliver sweeping curves. Dibond offers outstanding durability in outdoor applications and won’t bow or oil can.)

Kirkpatrick first used Dibond in 2010 to create artwork designed to look like street signs and displayed in Southampton, England. He used the Dibond material as a base for his artwork printed on vinyl.

“I liked the light weight of Dibond,” said Kirkpatrick. “It also offered a physicality that you don’t get from paper. It was around this time that I started to use a computer to create art and wanted to utilize art techniques to produce industrial-looking pieces. I found that Dibond could be cut quite easily. It was affordable. And, it could be digitally printed.”

Kirkpatrick again turned to Dibond in 2017 to create a piece commissioned by the Leeds City Council to beautify a neglected historical building in the Leeds South Bank area. Entitled “Renaissance,” the commission featured a series of Dibond window prints that were digitally printed and installed by Leeds-based Dock Street Signs (www.dockstreetsigns.co.uk/).

The “Renaissance” Dibond project has held up well and is still displayed in Leeds, so Kirkpatrick readily turned to sturdy-yet-lightweight Dibond for the museum exhibition that would be displayed for seven months.

“When I originally submitted my proposal, I suggested several Dibond panels to be scattered throughout the museum that would reflect contemporary life and modern migration in England,” said Kirkpatrick. “But once I was awarded the commission, they decided they wanted a really big and eye-catching piece. It needed to be large and visible in a less visible area of the gallery where it would be installed on the first floor leading to the exhibit upstairs.”

Kirkpatrick spent four months researching, planning and creating six panels for the exhibition which, according to the museum, explore the social and natural causes behind human migration, both in ancient times and in the present day.

As described by the museum’s More Than a Dodo blog: “It presents historical and modern peoples moving across a landscape in response to conflict, climate change and urbanization , and remixes imagery from classical paintings alongside iconography from Great War postcards, Roman coins and the Bayeux Tapestry.”

After researching the subject matter, Kirkpatrick used an iPad Pro pencil to sketch imagery and then re-drew the artwork in Adobe Illustrator, creating clean graphics and adding vibrant colors.

“I had to rearrange the design of the graphics to match the exact shape of the archways,” said Kirkpatrick. “We had to measure the arches very carefully because they were built in the 1800s. I then re-drew measured arches in Adobe Illustrator and fit the artwork into the arch shapes.”

Each of the six Dibond graphic panels arrived as two printed halves that would be seamed together for installation – a process that would pose its own unique set of challenges because the historic building is “listed” in England and its stonework must be preserved intact.

Rather than risk damaging the masonry arches by utilizing drilling or gluing processes, the museum’s building manager, Peter Johnson, devised hand-cut plywood pieces to sit snugly on the capitals and support the artwork – without allowing the Dibond panels to rest on the stone.

“We bolted the pieces horizontally together and made sure the images were aligned and then bolted them into the wood,” said Kirkpatrick. “We used adhesive tape between the two panel halves to make sure that they were flush.”

Kirkpatrick worked with museum building personnel to install the artwork – a process that was completed in 1.5 days utilizing strong scaffolding. Kirkpatrick gave a couple of presentations about the artwork during its exhibition and said: “The curator seemed quite happy with the piece.”

In the museum’s More Than A Dodo blog, Kirkpatrick described the completed project as: “a lot of work – but it’s also been very satisfying to see it finally installed. Although the piece initially started as a comment on contemporary British settlement, it evolved into something that explored global migration throughout all of history. Trying to find a way to tackle a theme that big while still remaining visually coherent is quite tricky! But I was really pleased with the results and love seeing the finished piece housed within the magnificent neo-Gothic architecture of the museum!”

Kirkpatrick’s art has been exhibited across the UK and internationally, with shows in New York, Chicago, Montreal, Berlin and London. He has produced commissions for the London 2012 Olympics, the Tour de France and the Oxford Museum of Natural History. He is currently working on public art projects in Leeds, Amsterdam and Rotterdam. 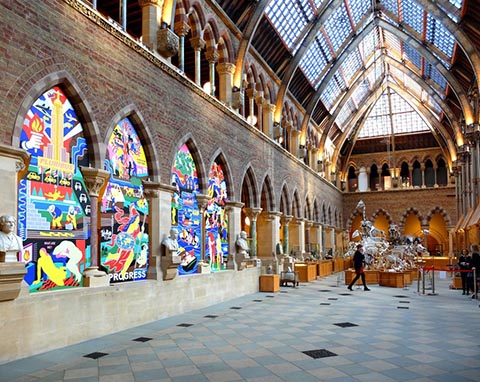