“We knew we had to choose POLAR machines again” said Neuerburg-based offset and digital printing company  of its decision to start up two new POLAR high-speed cutters N 78 PLUS and N 92 PLUS with stack lift and automatic jogger. With this investment, the family-run company close to the Luxembourg border will not only increase throughput by up to 30 percent, the machines will also make staff’s work easier.

It’s hard to imagine a more idyllic journey to a printing company. The narrow roads to Neuerburg, a town of about 1600 residents in the South Eifel, lead past deep, dark forests, rolling hills and historic castles. Located directly on the town’s main street and far larger than first impressions would suggest, the Hoffmann printing company has been producing printing jobs and print products of all kinds since 1985. What’s special about this family-run company, which employs 13 people, is that most of the orders, which include private and commercial print products from the region, come from agencies and companies in Luxembourg, which is just a few miles away. “It’s not unusual,” says Andreas Hoffmann, son of the company founder and responsible for production, “for us to receive an order at 10 in the evening, for example for mailings, flyers or posters. We then produce these early in the morning and deliver the goods to the customer in the afternoon.” One thing that makes the qualified offset printer’s working life considerably easier is that the agency employees in the neighboring country are not merely extremely well-qualified and always provide excellent data, but also that in the city that is home to the EU Court of Justice and numerous financial service providers huge value is placed on high quality, even for the smallest orders. Hoffmann: “Coating, die-cutting or other finishing processes are often involved, whether for an invitation, mailing or flyer.”

Designed to meet requests
The impact of the Luxembourg market and customer requests on the small but successful printing company is manifested in its technical equipment. The light and modern rooms contain everything, apart from an adhesive binder, needed for high-performance in-house print production and finishing in the 50 by 70 format. “In 2002 we were the first company in the Eifel to offer production with coating, and in 2010 we made major new investments and further expanded the area of printing and finishing,” says the businessman. Today, the company uses an Anicolor 52 HD, a CD 74 with coating, an SM 74 and a GTO for printing, and also has a digital printing machine. The finishing area contains folding and gathering machines, saddle stitchers and machines for processing mailings and bulk mail. “Because of the often very short order turnaround times, but above all because of the diversity of the products, we really need to have everything in-house so that we can immediately access it all,” says Hoffmann, who has worked in his father’s company since the age of 16.

New POLAR machines
For years, the two POLAR cutters have also played a central role in day-to-day production at the busy family-run company and are used to precut paper, but also primarily to process all kinds of materials. While the Polar 78 is predominantly used for paper, the focus with the Polar 92 is on cards and boards. “Having two machines helps us distribute the workload during peaks in demand and carry out preparatory and production steps simultaneously. The two machines are operated by two qualified bookbinders and an assistant, who carry out the work in 1.5-shift operation. “In 2016,” Hoffmann continues, “it was becoming clear that our old units from the Nineties were experiencing repeated malfunctions due to their age and problems were arising with the electronics.” In other words: After many years of smooth and reliable running, time was beginning to take its toll on the machines.

Concept needed
As the person responsible for printing, Hoffmann then had to decide what equipment the company wanted in the future, and whether and how the processes in the cutting area would need to change. “The most important thing for me,” says the 37 year old, “was that the new machines should provide far higher capacity and comfort for the employees. However, using entire cutting systems or planning cutting programs starting from the preliminary phase seemed to me to be too complex for our company.” Ultimately, therefore, Hoffmann decided on the following specifications: The machines were not to exceed a particular budget, had to be available within a reasonable time and take account of two fork-lift trucks that had been purchased a few years ago from an insolvent company, each of which had to be linked to one of the new machines. The machine brand was another important factor: Because the company had had excellent experiences with POLAR over many years, and was also very happy with the service, they knew that the machines would have to bear the POLAR name. “To be honest, it didn’t even occur to me to look into other providers or get quotes from elsewhere.”

Initial contact at drupa
Following an initial meeting at drupa 2016, in which the company’s specifications and the possibilities were discussed in detail, a decision was made in the autumn of 2017: The two old units would be replaced by newer versions from the same series, and an automatic jogger and stack lift would be added. Hoffmann: “When we compared the options, it became clear that the POLAR N 78 PLUS and N 92 PLUS high-speed cutters would move us considerably forward, while being fully sufficient in terms of functionality.” In addition to the option of connecting both high-speed cutters to new and existing peripheral equipment and turning formats from 780 and 920 millimeters directly on the table, Hoffmann was particularly motivated by the previously unavailable automatic graphic programming, which enables a largely automated work process. Hoffmann: “As we have a lot of repeat and similar orders, all we now need to do is touch the screen to launch a stored program.” However, a further reason for modernizing the existing group of machines was that the established production process could be seamlessly continued. The new machine arrived, was set up, and basically everything continued as before.

Implementation of the stack lifts
The company is also satisfied with the custom implementation of the stack lift: While the previous stack lift for raising the goods was integrated on the 78 high-speed cutter configured for paper, and the cut materials were stored directly on trolleys and other means of transport, two stack lifts are now used simultaneously on the 92 machine configured for paper, board and card: One that the company already owned to raise and feed the goods, and a new one for placing the cut goods on pallets. This second device is special because since it is aligned to the medium size, it can also be used simultaneously for larger quantities of material. Hoffmann: “Today, we are already cutting up to 300,000 mailings. Thanks to the new equipment, we work 30 percent faster and employees have it easier. We are therefore completely satisfied with our decision in favor of POLAR.” 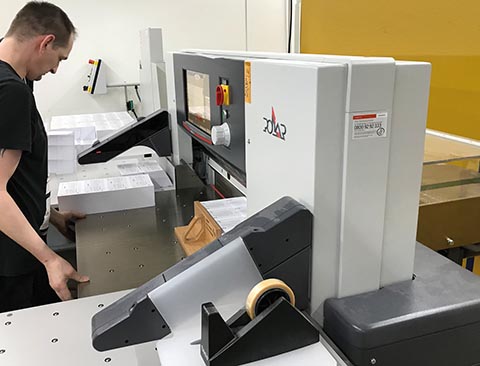