This year’s greeting card from Iggesund Paperboard is designed by the Taiwanese designer Kevin Chen, who specialises in embossing and foil stamping. The concept behind the card ranges from the Scandinavian forests, symbolised by the moose, which is the king of the forest, to a globe representing the world-wide availability of Iggesund Paperboard’s flagship product, Invercote.

The moose on the front of the card is a very deep and detailed blind embossing with several levels. The globe is a combination of blind embossing and foil stamping in silver. The card has several parts, which are made of Invercote Duo 610 g/m2 and Invercote Creato 300 g/m2. Chen says that Invercote Duo in particular is one of his favourite embossing substrates.

“Embossing places tough demands on the paperboard – the physical strain and the increased temperature caused by the encounter between the paperboard and the embossing tool. At the same time, the paperboard must be able to reproduce fine details. In my view, Invercote Duo’s strength properties and physical durability are ideal for embossing.”

The secret behind Invercote’s strength properties is that the paperboard is constructed in three layers. This makes it possible to vary the fibre composition and thereby to control the physical properties.

Kevin Chen’s focus on embossing was inspired at an early stage by the relief sculptures he saw at institutions such as the British Museum and the Louvre. When he later began his graphic career by designing wedding cards, he used the technique to enhance the recipient’s experience of the card. Another source of inspiration has been Guiseppe Castiglione, an Italian Jesuit who went to China as a missionary in the 17th century and who also painted.

“In his works, I find a tasteful fusion of the European and Chinese art traditions, which have been a great source of inspiration for me,” Chen continues.

Kevin Chen began by producing wedding cards at the beginning of the 1980s. His company also gradually moved into producing the packaging for corporate gifts for companies such as Toyota, Ferrero Rocher, 7-Eleven and Pernod Ricard. Previously, his company aimed to manage as many stages of the production chain as possible. Today, it outsources all the stages except the embossing and foil stamping, over which he wants full control.

Kevin Chen is 51 and lives and works in Taipei, Taiwan together with his wife and teenage son. He runs 10 kilometres before breakfast every morning, and he and his wife take every opportunity to participate in marathons and cycling events.

Invercote has become his favourite paperboard not only for its strength but also for its surface.

“It adds a graceful and sophisticated feel to my work. With that surface, even blind embossings acquire an unsurpassed elegance,” he concludes. 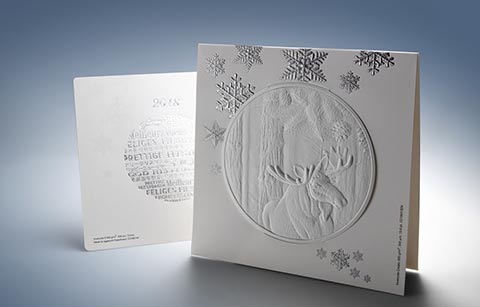 The highlight of the Iggesund Christmas card is a deep, blind embossing of a moose.