Architectural Coatings market is anticipated to witness a moderate growth, with demand expected to surpass 33,000,000 tons by 2018 end, according to the latest report by Fact.MR. The demand continues to remain influenced by the robust growth in the construction industry worldwide. Meanwhile, reconstruction and renovation of existing structures across the countries are also contributing towards the growth of architectural coatings market.

The construction industry is likely to grow significantly in the US, India, and China, according to the report named Global Construction 2030. All the three countries are expected to account for nearly 57% of the global growth, said the report.

With the emergence of the stringent regulations on the VOC emission, paint and coating manufacturers are shifting their focus from solvent bourne coatings to water bourne coatings. Also, around 80% of household paints sold today are water-based paints, as per the Paint Quality Institute. Advances in additives and resin technologies to overcome the performance issues of water-based coatings like viscosity, flow, and foaming are resulting in increasing demand for water bourne formulation in architectural coatings market.

APEJ to Rule Architectural Coatings Market, with China and India Accounting for Highest Market Share
APEJ is likely to remain dominant in the architectural coatings market for a long period of time. With growing economy and emerging middle class, the demand for residential construction is growing the India and China. Majority of the construction projects use solvent-based coatings and paints owing to the low-cost and better performance.

However, eco-friendly coatings have shown better growth in recent years with governments across APEJ introducing VOC emission. Research institutes along with the green coating manufacturers are investing increasingly in the research and development of innovative raw materials and technologies resulting in the non-hazardous and eco-friendly architectural coatings.

Decorative coatings used in construction, renovation, of the properties have also shown a steady growth in the APEJ region, especially in India, China, and Indonesia. To meet the demand for decorative architectural coatings and environmentally friendly coatings, key market players in the region are focusing on understanding relationship between application techniques, local raw materials, and a substrate difference.

Owing to the UV and weathering resistance, and good gloss and color retention, acrylic resins are witnessing increasing demand from paints and coatings manufacturers across the globe. Rising preference for hybrid coatings, prepared by blending acrylic polymer with other functional polymers for application in interior and exterior surfaces is driving the architectural coatings market growth. This has also emerged a way to overcome various inadequacies of traditional acrylic paints.

The demand for waterborne acrylic coatings is also increasing due to the new emission standards on VOC introduced by governments across various countries. In the last few years, acrylic surface coatings have surpassed the use of alkyd surface coatings in the paint and coating industry, especially in the developing regions.

The insights presented here are from a research study on Architectural Coatings Market by Fact.MR
https://www.factmr.com/report/2374/architectural-coatings-market. 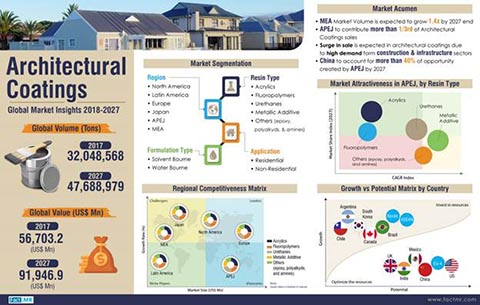