Paper Industry Reaps Potential Benefits of MFC Fibers, Accounting for Half of Global Consumption in 2017

Consumption of Microfibrillated Cellulose (MFC) Fiber is estimated to surpass 5,580 tons, with an impressive 11.3% Y-o-Y growth in 2018 over 2017, according to Fact.MR’s new study. Overall growth of the MFC fiber market can be attributed to;

“As manufacturers identify the potential of MFC fibers to develop fiber products with greater performance, R&D investments are on their peak in the MFC fiber market. Although talking about supply trend forecast is difficult, considerable interest in developing scale-up processes of MFC fibers will translate in profitability of the MFC fiber industry in the future,” says a senior analyst at Fact.MR.

As Performance Enhancer, MFC Fiber Utilization to Cross Two-Third of Global Demand in 2018
The study opines that demand for MFC fibers as a performance enhancer agent is expected to register over 65% of the MFC fiber demand in 2018. MFC fibers are used as a rheology modifier, thickening agent and strengthening agent.

In the barriers film landscape, MFC fibers hold the potential to replace plastic in the packaging industry. Incorporation of MFC fibers in fiber products deliver greater performance, improved tear resistance and oxygen and moisture barrier. As these are the essential quality sought after by barrier films manufacturers, the study shows that demand for MFC fibers in barrier films application registered one third of the global consumption in 2017 and the demand will continue in 2018.

Amid the extensive list of end-use industries, Fact.MR finds that the paper industry will hold nearly one fourth share in the MFC fiber market in 2017 and the status quo is likely to continue in 2018. MFC fibers have been studied to increase bonding and enhance dimensional stability of paper with the involvement of reduced raw material. Thus delivered greater performance is being highly appreciated by the paper industry, thereby driving the demand.

High potential of MFC fiber to replace plastic and growing emphasis on the development of renewable and biodegradable packaging solutions are key factors fuelling the utilization of MFC fibers across multiple end-use applications.

Europe Held over Two-Fifth Share in MFC fiber Market in 2017, North America Followed Suit
The study opines that Europe continues to register considerable demand for MFC fibers and held over two-fifth share in the MFC fiber market. Countries in Northwestern Europe are estimated to consume prominent quantities of MFC fibers and account for nearly half the Europe consumption. North America with its significant production as well as consumption of paper, is expected to follow Europe in generating demand for nearly 2000 tons of MFC fibers in 2018.

Well aware of potential industry benefits in the future, manufacturers have developed their proprietary production methods or initiated collaborations with technology savants to meet the large-scale demand for MFC fibers. According to Fact.MR, the MFC fiber marketplace remains a consolidated landscape wherein traditional players continue to strengthen their position in the global marketplace.

While front-runners and competitors ensure continued stronghold in the MFC market, lack of awareness regarding the full use of MFC fibers, limitations of large-scale production and competitive pricing in the market are milestones to be achieved by MFC fiber manufacturers in the future.

The insights presented here are from a research study on Microfibrillated Cellulose (MFC) Fiber Market by Fact.MR
https://www.factmr.com/report/1710/microfibrillated-cellulose-fiber-market 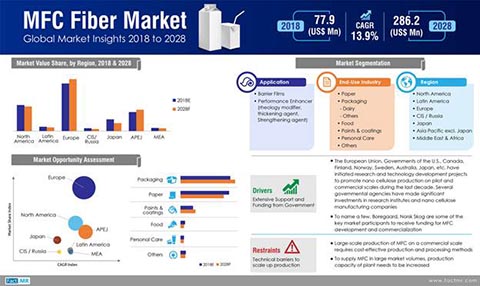