Key Insights Drawn from the Global Folding Gluing Machines Market Report
· The global revenue through folding gluing machines will surpass a value of US$ 5 Bn by this year’s end, witnessing a moderate Y-o-Y growth of around 4% over 2017.

· Sales of automatic folding gluing machines account for more than 80% of the total market revenue.

Convenience Foods Uphold F&B to Remain Largest End Use Sector Utilizing Folding Gluing Machines
In 2017, the global consumer expenditure on food and beverage products was registered roughly around US$ 6.5 trillion, i.e. nearly 8.5% of the GDP. F&B sector accounts for a remunerative 55% share in the folding gluing machines landscape, according to the Future Market Insights’ study.

Food sector, the top consumer of folding gluing machines, is witnessing a prominent push to revenue generation through dry foods and snacks segment. “The popular wave of processed, packaged, and convenience foods is substantially driving the demand for folding gluing machines worldwide, especially in developing Asian economies where the growth is likely to be concentrated in the near future,” explains a senior research analyst at FMI. 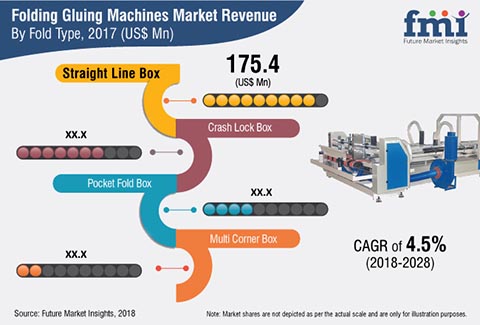 Rewarding Opportunities Reside in APAC, 1/3rd of Region’s Revenue Belongs to India & ASEAN Countries
The regulatory bodies based in Asian economies are pushing investments in manufacturing sector which have been translating into steadily growing demand for folding gluing machines in recent years. As reported by FMI’s study on global folding gluing machines landscape, India and ASEAN countries collectively account for around 1/3rd share in Asia Pacific’s market value.

Download sample copy of report with table of contents and Figures @ https://www.futuremarketinsights.com/reports/sample/rep-gb-7595