West Caldwell, N.J. – When a small graphic finishing shop challenges themselves to deliver big things to its customers, it requires a concentrated effort on everyone’s part. At The Fontana Group in Southlake, Texas, three key components for owner Jim Bugg are productivity, flexibility and reliability. That’s why when an older Seybold paper cutter was showing its age, he didn’t hesitate in calling Colter & Peterson and investing in a reconditioned 45-inch Polar system that arrived in July.

“My daddy once told me a story that had to do with being successful,” recalled Bugg, “From it I learned that if you supply your employees with the tools to do their job, there are no limits to what you can achieve. The people who work for me are true artists.”

Business grows after acquisition, expansion of services
With 20 employees today, the business has grown steadily since it opened as Lamination West in 1992. Two years later Bugg and his wife, Deborah Fontana, purchased it and continued providing lamination-only services until 2002. They renamed the business and expanded by offering UV coating, die cutting, and small format foil stamping before adding large format stamping and bindery to its service capabilities.

Known today as a high quality finishing shop for commercial printers, carton manufacturers, label printers and trade finishers, The Fontana Group does work for a nationwide list of clients from a 50,000 square-foot facility only minutes north of the Dallas-Fort Worth metroplex, Taking into consideration the type and level of jobs that are produced over two shifts five days a week, they couldn’t have asked for equipment more reliable than the Polar cutting system, with a new computer control solution and custom air tables to move product faster and safer.

“I’ve had Colter & Peterson service my paper cutters for about five years,” said Bugg, who consolidated his machines once he took delivery of the Polar system. “I had talked to people and saw C&P at a trade show. I’m aware of the quality and trustworthiness of their machines, and also trust their service and know they stand behind their equipment. I called Bruce Peterson and told him what I was looking for, and he had one for sale.”

A machine equipped to trim more than only paper
Polar paper cutters are well known for the above average speed of the back gauge. Combined with the latest computer technology, that helps with productivity. The Polar is also well regarded for its flexibility. Bugg said it is extremely helpful considering the range of work The Fontana Group performs, giving them the ability to cut plastic, chipboard, eflute, corrugated material and more.

“We do everything from mounting to corrugated – mostly die cut work and a lot with high-end coatings such as glow in the dark clear cut cards – then trim it down to size,” informed Bugg. “The Polar will cut the press sheets (most of the time 20-by-40 inches) that we will separate into stacks of 50 or 100. The average job is usually 25,000 sheets but we’ve done as many as 250,000 on one run. With that kind of workload, we need reliable equipment because once you’re down, you’re down.”

Bugg said he had one minor issue with the machine not long after it was installed that was quickly resolved.

“C&P took care of us immediately. It’s why I have complete faith in them and their representative, Bobby Jackson,” said Bugg. “The machine itself is very good. The air tables make it much easier to turn the sheets, and the machine itself is very accurate. The clamp lift gives us the ability to cut more sheets than we could with the old Seybold. So I’m very happy with how things have worked out.” 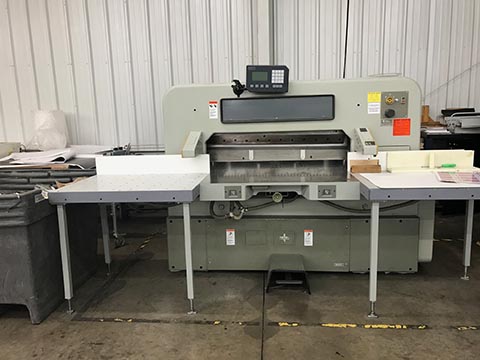