ColdsetInnovation Fulda has been printing two newspaper titles for a customer in China since the beginning of the year. The newspapers are produced for the Scandinavian region, the Benelux countries and Germany. “Our Chinese partners are very demanding when it comes to newspaper quality. Our Commander satellite press’ register accuracy, extremely low fan-out and minimal makeready times tipped the scales in our favour,” says Siegfried Wahl, assistant vice-president and technical director at ColdsetInnovation Fulda. And, contrary to the general trend, the circulation of both newspapers (Berlin format) has increased by more than 10 percent this year. Siegfried Wahl: “Without our Commander this deal would not have come about. Our press operates flawlessly. We have been working successfully with Koenig & Bauer for decades and are very satisfied with the services they provide.” 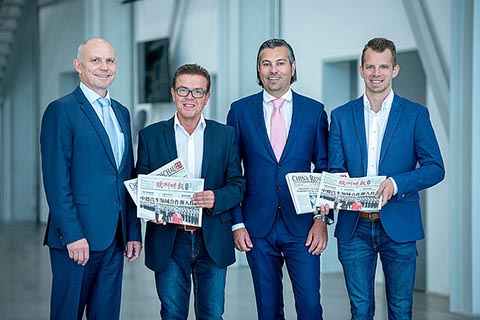 A Commander satellite press with an hourly output of up to 90,000 full-colour newspapers has been in operation at ColdsetInnovation Fulda in Eichenzell, Germany, since 2010. The highly automated press that was extended in 2011 consists of three reelstands, three printing towers, a KF 5 folder and numerous add-ons for inline finishing. The 70 employees at ColdsetInnovation Fulda guarantee economical, high-quality production. The company primarily produces daily and weekly newspapers, books and catalogues. Even substrates that are particularly difficult to handle, such as transparent paper, can be printed and processed. The company has been producing the Ärzte Zeitung and Ärzte Woche for years with a transparent wrapper.

The Guang Hua Culture and Media Group is the largest Chinese-language culture and media group in Europe. Its Paris-based newspaper Nouvelles d'Europe has been published for 35 years and is distributed throughout Europe. Today it has branches in London, Vienna, Frankfurt, Rome, Madrid and Beijing. In its 35-year history, Nouvelles d'Europe has consistently expanded its media offerings.